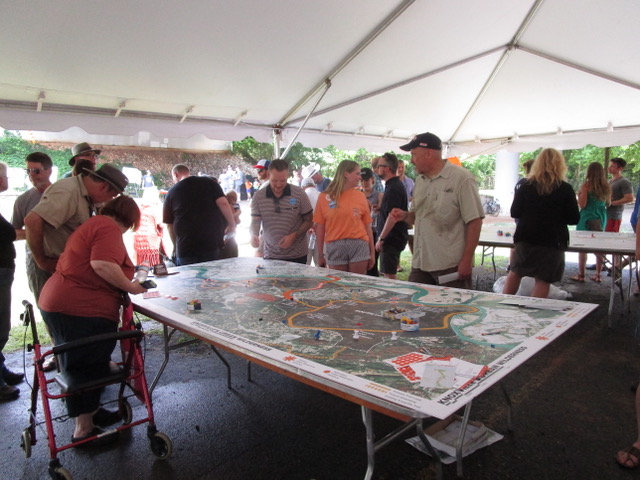 Manhattan has its central park. Vancouver boasts its Stanley Park. Other cities big and small take pride in green spaces that allow its denizens to take a respite from the noise and chaos of urban existence. They provide these places to congregate and share the joys of outdoor life, be it by biking, hiking or simply soaking up the sun. While city life doesn’t always offer all that many opportunities to commune with nature, those municipalities that put extra emphasis on quality of life reserve unspoiled environs for their citizens to enjoy.

In 2011, the city of Knoxville undertook a similar mission, setting aside 1,000 acres that would provide an outdoor adventure area with an array of amenities to accommodate those who want to take advantage of the beauty of the city’s tranquil surroundings. Appropriately dubbed the Urban Wilderness and overseen by the city’s Parks and Recreation Department, it became a relaxed retreat that boasts over 50 miles of trails and greenways, sparkling lakes, scenic vistas, quarries, playgrounds, sites of historic interest and a 500 acre nature refuge. In all, it encompasses nine recreational parks, preserves and attractions, all connected by a network of trails that provide easy access to each adjacent destination.

It’s a credit to Knoxville’s city leaders that Urban Wilderness is not only immaculately preserved, but also provided with plans for expansion. In her April 27 State of the City Address, Knoxville Mayor Madeline Rogero proposed $10 million to provide 20 additional acres for an Urban Wilderness Gateway Park, one that would allow a direct connection to the wilderness from South Knoxville with all its accompanying amenities. It was met with unanimous approval from the city council. The site, acquired from the Tennessee Department of Transportation begins where James White Parkway ends, turning a road to nowhere into a welcoming center that not only gives additional access to those scenic surroundings,but also adds trails, a bike park, parking and children’s nature play areas.

The project, which is currently in phase one of development, is expected to take two years to complete. While still in its infancy, those overseeing the expansion are actively seeking the input from local citizens to determine which designs and offerings the people would prefer. This past Saturday, the city threw its version of a block party, allowing people to come to the site, examine the various proposals put forth by developers, and then share their opinions on how the plans should progress.

A series of placards set up onsite bore sample suggestions:

“How can we create a destination by enhancing and building upon preexisting wilderness amenities?”

“How can we improve access to the Urban Wilderness trail system?”

“How can new amenities respect and enhance the ecology of the Urban Wilderness?”

“How can we transform the northbound lanes of James White Parkway into a pedestrian greenway?”

“How can the Urban Wilderness connect to surrounding destinations and neighborhoods?”

Comment cards left at long rows of tables offered opportunity for participants to respond. It asked respondents to name their favorite place in the Urban Wilderness, their favorite activity once there and the thing they would most like to see at the future Gateway Park.

Despite a pounding rainstorm immediately preceding the event, approximately 100 people showed up to view the proposed designs, examine architectural models and mock-ups, and read charts and graphs that outlined possible plans for the park’s design. Representatives from various neighborhood associations that border the wilderness area and officials from the various organizations that have allied with the city to enable the Urban Wilderness expansion were also on hand to answer questions and detail the work they’ve done in furthering the recreational area’s expansion.

The formal presentation began with welcoming remarks from Council Woman Stephanie Welch, representative of Knoxville’s 1st District, where the new gateway is located. She began by commending the crowd for taking time to attend. “How wonderful it is to live in South Knoxville,” she began. “I’m so proud to represent a community that is so engaged in moving the our community forward.”

She recalled her move to the area in 1995, and how, while touring the city with her family, noted “how cool” it would be to have a park on the site where it’s being developed now. She then went on to recognize several city officials, past and present, for their efforts in helping to support the various aspects of the Urban Wilderness overall. The goal, she said, was to provide the wilderness area with connectivity to neighborhoods, businesses and schools. “This is an exciting time for Knoxville,” she remarked, urging the audience to share their thoughts and ideas.

Urban Wilderness Coordinator Rebekah Jane Montgomery, speaking on behalf of Knoxville’s Park and Recreation Department as the official liaison between the city, the citizenry and the various community concerns, took the podium and shared her enthusiasm with the audience. “This is an amazing opportunity to transform this space into a true reflection of the community,” she said.

Noting that the gateway will provide an important hub to Urban Wilderness, she suggested that it become a place for groups to gather and for individuals to enjoy a spectacular setting that could connect the parks to the city itself. “The park will reflect you,” she told the gathering.

Later, speaking to reporters, Montgomery said that the community has a unique opportunity to take part in the park’s transformation. She stressed the importance of the connectivity through the streets, trails and parking that will provide residents and visitors with increased access to the area overall.

Among those on hand for the block party was Renee Hoyos, a candidate competing to represent Tennessee’s 2nd District in the United States Congress, and a resident of South Knoxville herself. Hoyos, once Executive Director of the Tennessee Clean Water Network and an activist concerned with environmental issues, noted, “Trees are the lungs that keep our air and our water clean. They reduce energy costs. The better the community, the better it is for its residents. It’s a win-win for everyone. We can’t do enough to protect our environment.”

Have an opinion? You can have input through their survey.