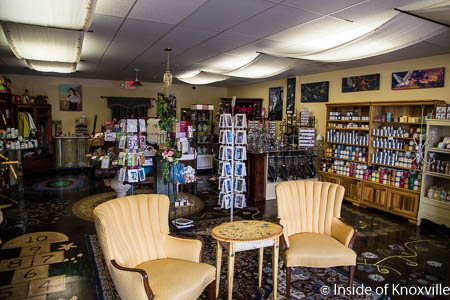 Jodi Bowlin, long-time owner (and now co-owner with husband Joshua Eades) of Knoxville Soap Candle and Gifts has announced her decision to move the business to downtown Knoxville. It’s another shot of the slowly building retail outlets in the center city and, at 714 South Gay, it will stretches the retail zone of Gay Street.

I visited the Homberg-area business to see what we might expect. The attractiveness of the space was immediately striking and the range of products offered followed as a close second observation. Far beyond the items noted in the name of the business, I immediately noticed a selection of books and Bill Lee’s beautiful hand-crafted pottery as well as the hand-painted art on the floor (by Jodi with help from others).

Ms. Bowlin proudly pointed out that short of a few seasonal items, the products in her store are all local or regional. She works hard to offer products no other stores carry. In point of fact, many of the local artisans sell their products only through her store.

Originally from Kingsport, Jodi grew up in California, spending most of that time in the Bay Area. As a teenager she modeled in Asia after being discovered on a Streetcar in San Francisco. She returned to East Tennessee in 1995 where she raised her son who is now attending UT focusing on cybersecurity. She bought the business in 2008, when he was in second grade, after managing it for two years.

She’d managed a gallery before and fell in love with the little store, then located in Fountain City. She particularly enjoyed getting to know customers. She began shifting the store to more local vendors and survived the recession as she increased the number represented by the store to around fifty. She didn’t solicit them, but welcomed them as they approached her. For some of her vendors she realized it was important income. She said, “I feel rich in so many ways. When I give local people their checks, I know it is buying food and dance lessons, making a difference.”

She’s also developed relationships with customers, some of whom, like her vendors, she has now known for over a decade. She wants to make them feel comfortable when they walk in the door, offering them tea as they shop. She loves telling the stories behind the items they selected and enjoys imagining them passing those stories on as friends see the items in the customers’ homes. She looks forward to developing that sort of community feel in her new downtown location.

In 2014 she moved the store to the Bearden area location on Kingston Pike, thinking the busier area would be better for her. While she has a number of very devoted customers, many people simply drove by on Kingston Pike without noticing the small shop. She also points to the headwinds facing small, local retailers in the form of Amazon Prime and other online retail sites. She feels people are driving to shop less – but hopes a downtown community more inclined to walk – whether residents or tourists – will drive the business.

She’s been honest about the struggles of small brick and mortar retail. She was filmed for a series on Al Jazeera America and documented the difficulties there. She hasn’t had an employee in eight years, doing all the work herself. She considers shopping local businesses – and especially retail that sells local products – to be “shopping with a purpose.” Once Josh bought into the store, the two decided a downtown location would be best for its future.

The store features, “handmade, affordable items, truly locally crafted.” She adds, “Our downtown needs a shop like this.” Her inventory constantly changes and what she’ll have next depends on what her vendors decide to make. She currently has nine local soap makers who, she notes, do not use chemicals and neither do the candle makers. She points out that difference means her store doesn’t smell like a national chain candle store.

Among the products offered by the approximately thirty current vendors, you’ll find handcrafted jewelry she says you cannot find elsewhere and she has only one jewelry vendor. As mentioned, you’ll also find Bill Lee pottery, but you’ll also find lots of hand-made paper products, like journals and greeting cards featuring photographs by local photographers. She’s the only retail outlet where you’ll find Marble City Glassworks.

She has books by fifty local authors and clothing, including hats, scarves and shawls, all hand-made locally. You’ll also find art and handbags. All consumable products offered is natural and botanical. She’s vegan and she has a lot of vegan products, but she offers them at much lower prices than you might find at a national chain while, she maintains, the products are better quality you might find elsewhere. Also, look for scrap-booking materials.

She has vegan, peraben-free skin products out of Cookeville. She has a line of locally-made essential oils which she describes as, “therapeutic grade and 100% pure.” You’ll also see familiar products from Greg Blankenship of Gregory’s Greenhouse as she has carried his plants for the last four years and plans to continue to do so. She says to expect the classic and not the trendy and to look for a surprising number of products under $5. You will also find clothing from Sally’s Alley.

She’s been a frequent visitor to downtown since her return to the area and is excited to become a part of its business community. She pleased that her new location has parking directly across the street, but also should benefit from foot traffic to the theatres and from the new hotel being built behind the block. The new store will also include about 2,000 square feet – up from her current 1400.

She also offers private shopping parties with catered refreshments included and 20% off all merchandise. She said she’s had some businesses – like doctor’s offices – give a party for employees, giving them each $100 to spend at the party. Additionally, she hosts events like author signings, in-store music performances (she’s purchased a baby-grand piano for the new location) and more. She says she has about fifty events per year and she’s already scheduling them for the downtown location. She’s lined up Glowing Body Yoga and Healing Arts to offer chair massages every Saturday in December.

The current location will close September 8. In the meantime you can shop her online store which offers her candles and soaps, but she plans to have the new store open by October 1, with a grand opening celebration October 6. November 3 will be a Christmas Open House. Also look for First Friday events. Initial hours will be Monday through Saturday, 10:00 AM to 6:00 PM. Check out the website and “like” and follow them on FB.