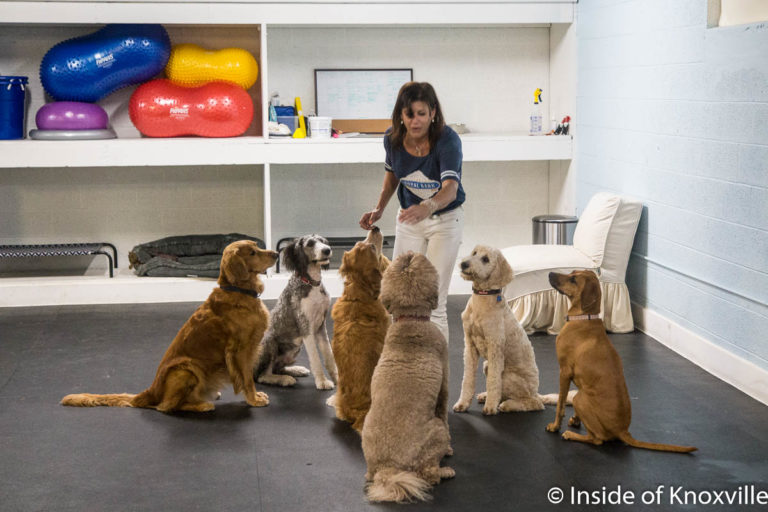 When Alisa Hamby starts talking about her love for dogs, it’s clear she means it to her core. To have someone who loves dogs so much open a Dog Daycare can only inspire confidence in anyone considering using the Royal Bark Social Club. The fact that the service has landed in the center of a very dog-centric city has to bode well for its success.

Originally from Maryville, Alisa attended UT and lived in Knoxville for most of her life. She worked as a pharmaceutical sales rep for years, but when her husband was transferred to San Francisco, where they stayed for a year, she began to pursue a career with dogs.

She took a three-day certification course in dog walking – yes, that is a thing – and started walking dogs in her building. She built her clientele to seventeen dogs a day, walking them as many as four at a time. But she’d been dreaming bigger than that for years.

When the couple returned to Knoxville, she had to decide: A career she’d come to dislike or to take a chance and pursue her dream of a dog related business. She’d been visualizing it for years and had even picked out the name long, long ago. She picked the dream and began a months-long search for the right spot.

It was tricky. The space had to be centrally located to downtown, large enough for the pups to run about and in a building where barking wouldn’t bother the neighbors. She found the perfect spot on the backside of the building that houses Marc Nelson Denim.

The place is decorated for the special animals and their people, so you’ll find a nice sitting area for people – overseen by a picture of Jack, Alisa’s companion animal for twelve years. He was the inspiration for the Royal Bark Social Club, rescued via Tennessee Golden Retriever Rescue and even participated in Alisa’s wedding.

You’ll also see a very spacious, clean and colorful area where the canines run about and play with each other. Separate sections are provided for small and large dogs. She says lots of art is on the way to dress the place up even more. It’s the first dog facility

She says she’s, “always loved dogs. They make me so happy.” She did research over the last ten years, visiting other dog daycare facilities and attending conferences. It was her experience in San Francisco that, “gave me the confidence. I came back and knew it needed to happen.

Services offered at the daycare are wide and varied and there’s more to come. Obviously, dogs may be dropped off for a half-day or full-day. But dogs may also be brought by for a wash – self-service or full service. Hate dog hair in the tub? Have no place to wash your puppy pal? They’ve got you covered.

They’ve also secured the license to provide Cannine Fit Club, which is a fitness program for the dogs and their humans to jointly get fit through circuit training. Those classes are coming soon. They’re also planning mixers for the people and puppies. Alisa throws around terms like “yappy hour,” birthday pawties and pawmitzvahs. She’s open to doggy weddings like the one she attended in San Francisco (complete with doggy cake and grooms-pups).

The facility is indoor and air conditioned, but the dogs are able to get outside and walk. She says the parallels with child daycare are numerous: They have nap time (toys are put away, lights down, cue classical music), make friends, and get a report card emailed home each day. “It’s fun to watch them grow and become more comfortable and socialized.” I personally witnessed a bit of nap time and it was impressive. You can see part of it in one of the photos with this article.

The day for the dogs is spent in play and stimulating activities. These are led by Alisa, but also her four employees – who just happen to be pre-vet students at UT. She calls them, “Royal Bark Ambassadors.” She says, “My dogs are like my children. I wanted my workers to have the same passion, so I reached out to the pre-vet club at UT and within three hours had ten applications.

While they are not currently boarding dogs overnight, they do plan to be open Saturdays during home football games, probably having their own “tailgate pawty while their parents go to the game.” She has plans to extend into other services, such as pickup and delivery from downtown and area homes. “The sky is the limit. We want to cater to our dogs.” She recently hosted a charity dog wash for the Humane Society and is happy to host rescue events and fundraisers.

Mostly she’s just pleased to be realizing her dreams and surrounding herself with happy dogs. “I want to provide a safe, fun environment and the best customer service.” I suspect that’s just what you’ll find there.

They opened July 9th and are open Monday through Friday, 6:30 AM to 6:00 PM. Follow along on Facebook, check out the webpage for extensive details, including pricing packages. For appointments or additional information, call (865) 386-1524.