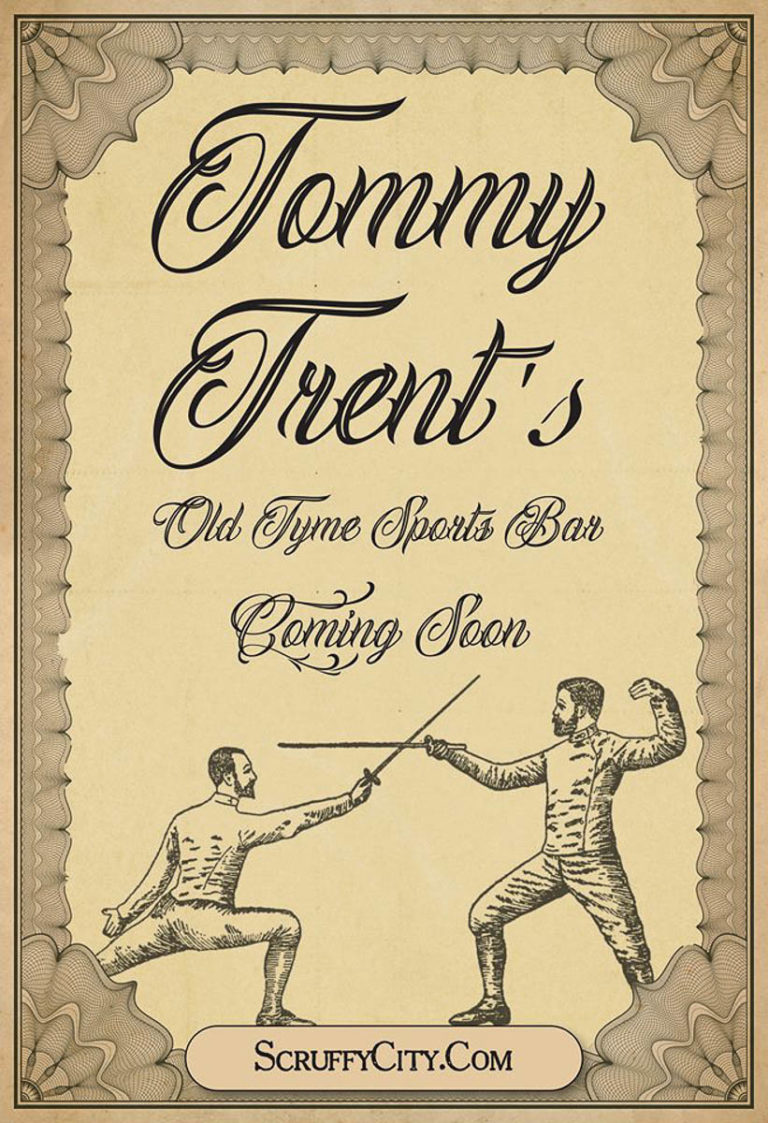 It’s not as if Scott and Bernadette West need something more to do with their time. In addition to operating Preservation Pub and Scruffy City Hall and, along with family, Uncorked and Earth to Old City, they’ve got construction underway at 26 Market Square for Bernadette’s Crystal Barrooms set to open in September. They’ve also recently moved operations for Market House Cafe to Uncorked to offer early morning baked goods and coffee drinks there.

With so many balls poised precariously in the air, you might think they’d consider stopping at that. That would be a misjudgment. The couple has announced plans to open a sports bar, or as Scott prefers to call Tommy Trent’s, an “Old Tyme Sports Saloon.” He promises it won’t be like your typical sports bar and if their track record indicates anything, it would be the truth of that statement.

You might ask (can’t you see the t-shirts?), “Who the hell is Tommy Trent?” There’s a pretty cool answer to that question. Tommy Trent grew up in upper east Tennessee, graduating from Dobbyns-Bennett High School in the late 1940s. He was a member of the undefeated – and unscored on – state champion football team. He went on to play at Georgia Tech before transferring to UT.

While there he was a member of the ROTC and, so, joined the army upon graduation. He rose to the rank of Lieutenant Colonel and served two tours in Korea and then two tours in Vietnam. While stationed in Germany he met his wife and, significantly for our story, had a child named Bernadette. Bernadette spent her early years in Germany before her father retired from the army and she moved to the states. The rest, as they say, is Knoxville history.

The transformation of the space formerly known as Market House Cafe Scott says, will be pretty simple. The large case he originally envisioned containing cheeses will be removed in favor of an attractive bar with seating. The seating along the windows will be change into booth seating for four. It’s hard to watch a sporting event with your back to the television.

He’s shooting for a place with personality and, while UT games will certainly be featured when they are on, it won’t be a team bar. He wants everyone to feel welcome, no matter their preferred team. He wants the place to follow the vibe of Preservation Pub, in that everyone is welcome. You’ll likely find vintage sports memorabilia or posters representing an earlier era.

The food will be simple. You’ll find the expected buffalo wings, but with a range of sauces that may surprise you – they plan to have sauces with flavors from all over the world. They’ll also have Scruffy Dogs with all the fixings and fries and, wait for it . . . Tommy Tots. You’ll also find the range of beers you’ve come to expect from the West establishments, as well as wine and a full bar.

The plans also call for private spaces for events utilizing the catering kitchen at Uncorked. Hours are projected to be from about 11:30 AM to Midnight with the opening set for September 1, though Scott is hopeful it will be sooner.

Meantime, work continues on Bernadette’s Crystal Barrooms. The rooftop space has been the focus this week, with the beams laid for the extension from the rooftop bar on Preservation Pub. An elevator shaft in the back will increase accessibility and allow for kegs to be more easily hoisted to the top.

Plans on the two joined rooftops call for three bartenders, two servers and two bars. Previously the rooftop at Preservation Pub only included one bartender. Large amounts of space will be opened up by removing some of the structures that have taken up space on the Preservation Pub rooftop. Available space should be near triple what it has been.

Public Service Note: Gay Street is a mess and will be for a while. You might want to check this link before venturing out in an automobile.