Fourth of July Fireworks and Week 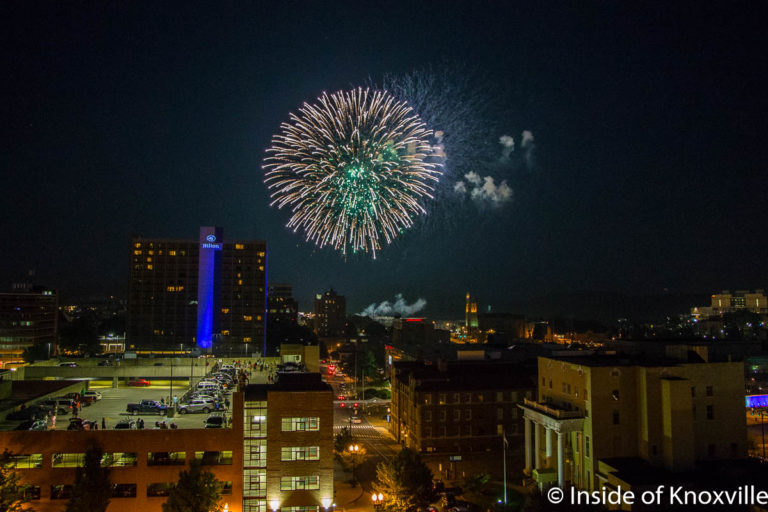 Here is my annual contribution to mediocre fireworks photos. I don’t think I’m getting any better from year-to-year, but some years the wind is more favorable than others to remove the smoke which, if you don’t know, is the enemy of good fireworks photos. Our brains screen it out, but the photos don’t lie.

I only published once last week and it was largely because of what was going on in the family. I took a trip with Urban Daughter leading up to last weekend. We visited Mobile, Alabama because she wanted to see family history spots and to visit her grandfather’s grave. The journey that began with his death last fall is largely finished as the stone has been placed on his grave. We needed some closure or at least another step.

We returned to Knoxville on July 1 with my eighty-one-year-old uncle in tow. He’s one of the final living pieces to our Mobile story and we’d like him to move here. His only way to visit is if I pick him up and bring him here. It’s complicated. So, our fourth of July week was about him.

There’s a lot of talk nationally and locally about, “aging in place.” The idea is that if you live in a place that allows you to meet your needs without driving you can stay independent for a longer time. If my Dad, for example, had lost his ability to drive, he could not have functioned in the rural/suburban environment where he lived.

That said, a stroll around town with an eighty-one-year-old is apt to remind you that short walks in the city for those of us who are younger, may be quite a trick for some older people. He struggled walking around downtown, especially when it was so hot. It limited us. I used the car more than normal. Some of our plans had to be canceled or reduced.

We took him to Knoxville High Independent Senior Living, which is a place we’d love to see him consider. It duly impressed him, though I’m not sure he’ll really consider it. Urban Brother cooked and served lunch for him there and what’s not to love about that? The food was predictably amazing (corn chowder and salad for both of us).

Four of July for us has always meant family gathering around and, for the last nine years, the gathering spot has been downtown. Urban Daughter, Son-in-Law and Urban Girl and Urban Boy arrive early to beat the traffic. This year Urban Brother (happily) lives here and could celebrate with us, my uncle was with us and we added a family friend. I love that we have an outside space to grill, which is something to which not everyone in the city has access.

After Barbecue and naps we took the troop for a visit to Urban Brother’s condo in Fourth and Gill for a visit, then back home for a little more food before fireworks. Urban Boy said he didn’t want to go (too loud), then made a game-time adjustment to join us, after all.

One of the great things about living downtown is that festivals and other events that draw large crowds are much more manageable. We don’t have to fight the traffic, nor spend uncomfortable hours waiting on the fireworks to start. About five minutes before they began, we walked outside, road an elevator to the top of a garage and settled into a spot a few minutes before they began. When they end, we walk back into the house. Pretty sweet.

Friday, Urban Woman and I drove my uncle back to Mobile, spent the night and returned on Saturday. A quick thousand mile round-trip to go with last week’s thousand. It’s nice to be back in town for a few days and it doesn’t take much travel to realize Knoxville is a pretty sweet spot in many ways. Not perfect, but then, no place really is, right?

I hope you had a good holiday week and enjoyed family, friends and good food. Now it’s back to the business. Lots of news is on the horizon for the city. Meanwhile, I hope you enjoyed the few splashes of color I captured last week.