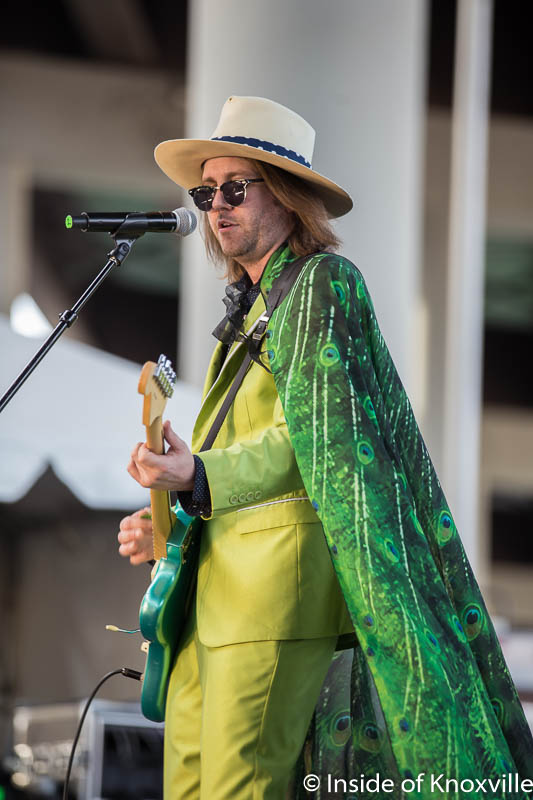 The Second Bell Festival, produced by Blank Newspaper is taking a more definitive shape as the August 18 event draws closer. I sat down with Blank’s owner and editor, Rusty Odom, to get the details on the first festival to be held in Knoxville’s newest park, Suttree Landing Park, and the first in south Knoxville. Those of you who remember Blankfest will recognize some elements from the festival that preceded this one, but you’ll also see this event will be far more expansive than its parent.

Saying, “We’ve cherry-picked our favorite bands that have come through town and put them all on the same bill,” Odom announced the additions of The Artisanals which is an unrecorded band that has already toured opening for Band of Horses. Odom says it is a, “chance to see them before they explode.”

Also included in this announcement is a joint performance with Andrew Leahey and John Latham fronting the same band and swapping songs. The Thrift Store Cowboys have also been included on the bill and the big announcement is the of Aaron Lee Tasjian whose “Silver Tears,” album is one of my favorites. His appearance at the Rhythm n Blooms festival in 2017 absolutely blew me away. I feel similarly for many of the other artists on the lineup.

With the addition of the above artists, the day comes more into focus and it is a day full of a range of experiences and events designed to make the day one to remember. It kicks off at noon with the Kids of Rock doing Led Zepplin songs. Two stages facing each other across the grounds, with the back drop of the city skyline will keep the music moving as the shows alternate between the stages, meaning there will be little lag time and festival goers can hear every band.

Comedy and burlesque have been a part of Blankfest from its beginning and as it grows and morphs into Second Bell, that will continue to be the case. Just a short walk from the festival main site, the comedy and burlesque will be staged at Everything Mushroom on Sevier Avenue. Odom says those components have been among the most successful parts of the previous festival.

Transportation has been attended to in some detail. Parking at the coliseum and riding the #40 route on the KAT bus will get you to the site with no hassle. Shuttles will be offered from the Dwight Kessel Garage or from the garage across from the new Regal Cinema headquarter where 250 spaces will be provided. It’s also walkable from that spot – or from downtown, for that matter.

My favorite way to get from downtown to the park is by bicycle and he says there will be accommodations made for bikes, with a large amount of secure parking to lock them up (bring your own chain) and a paid professional guard to oversee them. To encourage cycling, everyone arriving on a bike will be given a coupon book with discounts for south Knoxville businesses and businesses which advertise in Blank.

In addition to the general admission tickets – which are currently priced at $20 as an early-bird incentive, but go up in price next week – VIP tickets will be available. VIP ticket holders will have shade lounge areas provided and private access to bars where the lines promise to be much shorter. They’ll also have private restrooms and a prize package which includes a tshirt and a poster designed for the event by Status Serigraph. VIP tickets are $75.

Odom was also quick to point out how many people and businesses have been supportive. Landing House and Bee’s Knees salon are providing services and he said, “The city has been great to work with. I’m lucky to call Knoxville home. Judith Foltz, the mayor’s office and the KPD have made the process much easier.

Sugarlands Moonshine has been a great sponsor for this event and many other musical efforts for years, he pointed out, saying, “They always step up for entertainment events and make them possible. He also mentioned the support he got from Scott and Bernadette West to get the Blankfest events up and running. The 12,000 or so people those three festivals drew made the current festival possible.

Of the location, he says, “I’m a huge fan of south Knoxville. It has a rural feel with the convenience of being directly across the river from downtown. For anyone who hasn’t been to south Knoxville lately, I think this is a great opportunity to experience what will be one of the coolest parts of our city in the coming years.”

He sees the festival as a celebration, not only of south Knoxville, but of the first park the city has opened in twelve years and of Knoxville’s riverfront. He’s also a big fan of the temporary reprieve from day-to-day life festivals provide for the participants. “The reason festivals have taken off in the last twenty years is because it gives people the chance to make the monotony of everyday life disappear. I want to change people’s head space as soon as they walk in.”

And he wants the experience to start at the gate:

After John Ward passed away, recently, I listened to various tributes and heard a speech he gave to the Pride of the Southland Marching Band before a game. In that speech he said, “There are thousands of people waiting for you to take that first step.” He went on to talk about the T and their high steps. I want that to be what people feel when they walk into the festival.

We have a team of about fifteen young people helping us who have been to many festivals and have new and exciting ideas. I’m really lucky to have a situation where we can all work together to make something special that Knoxville will never forget.

The current lineup includes The School of Rock, The Pinklets, Andrew Leahey and Jon Latham, Teen Spirit, Thrift Store Cowboys, Guy Marshall, The Artisinals, Luthi, The David Mayfield Parade, Repeat Repeat and Aaron Lee Tasjian. You can follow along on Facebook or the Second Bell website. Tickets, which are $20 for the next five days, are available here.