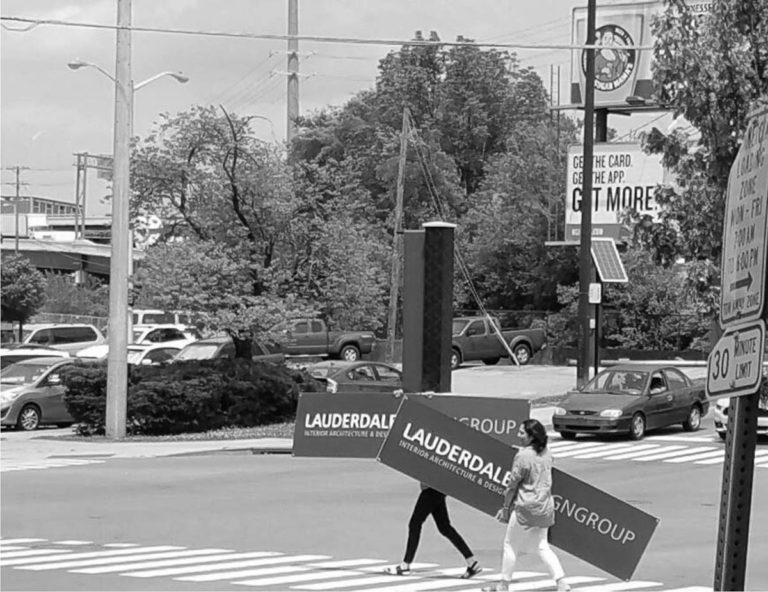 Lauderdale Design Group may be the best known downtown business that you’ve never heard of. The group is responsible for literally millions of dollars worth of design work on UT campus, particularly in the athletic department and has operated for over a decade. I sat with Joy Lauderdale to explore the journey that led her and the company to this point. Hint: It wasn’t a straight line sort of journey.

Growing up in Athens, Tennessee, Joy’s father had an agriculture degree from UT and her mother was a church organist and pianist for over sixty years at the same church. Her mother and friends also rented the local high school auditorium and presented concerts in Athens. Her mother was known for her piano duets. Her father, a fertilizer salesman, died when she was a junior in high school. Joy’s mother said she got her ability to talk to anyone from him.

After a year at Tennessee Wesleyan studying accounting, Joy transferred to UT where she joined the Human Ecology department which then offered the interior design degree. She noted the program has now been moved to the School of Architecture and is called interior architecture. She says she enjoyed the idea of most of her work involving drawing and being creative, though she pointed out it is a difficult career path because of the eternal struggle to define for people the value a designer brings to a project. She received a degree in interior design with honors.

In college she worked with Lord and Chase Design. Elizabeth Lord would later marry Bob Corker and Donna Chase is married to Mike Chase, so those early connections helped her get started. After receiving her degree, she immediately found work just as CAD was introduced. She had a very supportive boss who sent her to classes to learn the new software working with commercial interiors. The model was that the sales force would bring in the work and the designers would do it. There was very little interface between designers and clients or the other professionals working on the project.

The owner also sent her to Chicago for furniture shows – a trek she still takes annually – and that helped her understand another end of the business. After six years, she moved to the company’s competitor which utilized her design skills to sell furniture. That model began to change and she forced the issue to press the point that design had intrinsic value.

Twelve years in, she wanted something different and shifted to a job with a flooring company. While she ultimately decided to move on, she says she learned a great amount about the construction end of the business through this job. She learned where the design information landed and came to understand who implemented it and the pitfalls surrounding interpreting the design plan and transforming it into reality.

Leaving that job in 2002, she wanted to chart a new course and began to take on jobs independently. She spent the next several years working on family projects – a condo in Hilton Head, an addition to her sister’s home – as well as others. The learning at each stop continued as she said she learned the difficulties of women working in a construction field.

Back in Knoxville, she received a job offer, deciding instead to work with them as an independent contractor. She began work with them on her first UT project, designing furniture packages for the sky boxes in Thompson Boling Arena. It was about a million dollar project and the ones that followed were larger. It was a turning point in her career and for her company. She says the UT projects are very complicated due to their regulations and requirements, as well as coordinating with so many contractors.

She said everything possible went wrong with the project, but she made it work and that was noticed by UT which has been very helpful. She continued to work independently, coordinating with a a number of companies. The business took off in 2006 as she began to market her services to architectural firms. “I felt like clients hiring architects understood design – and I would get paid!”

She and her team did the interior design work for the UT Football Training Center. From that she learned how large the organization is that produces the product we see on the field each fall. An interesting development along the way was the beginning of the coaching merry-go-round. She started work under Fulmer and worked through two additional coaches who kept changing what they wanted, resulting in the project lasting six years.

With these projects under her belt and feeling confident to take the next step, she established offices in Louisville, Tennessee, where she remained from 2008 – 2012. At the prompting of a young employee and having known David Dewhirst from high school, she moved into one of his buildings on Summit Hill, officially bringing the business downtown.

She worked as part of the design team on the Natalie Haslam Music Building, selecting and installing the furniture there. She won an award for that work and also for her hospitality work on an eighteen unit condo development in Ridgedale, Missouri. She also won two AIA awards this spring for her work at Maple Hall in downtown and for her work the the Knoxville Area Association of Realtors.

With a good bit of time and a lot of help, she transformed the space from “rough,” to functional and worked out of that building until this spring. With two designers, an office manager and periodic interns – as well as a huge library of materials – the firm eventually outgrew the space. When Nest departed 108 South Gay, she decided the spot offered more visibility and the room she needed to grow.

As Lauderdale Design Group starts a new chapter in the journey, Joy’s excited to see what the new location offers the business. And she continues to spread the gospel of design, explaining it and promoting it one client at a time. Check out their FB page at the above link or follow them on Instagram. A new webpage is currently under construction.