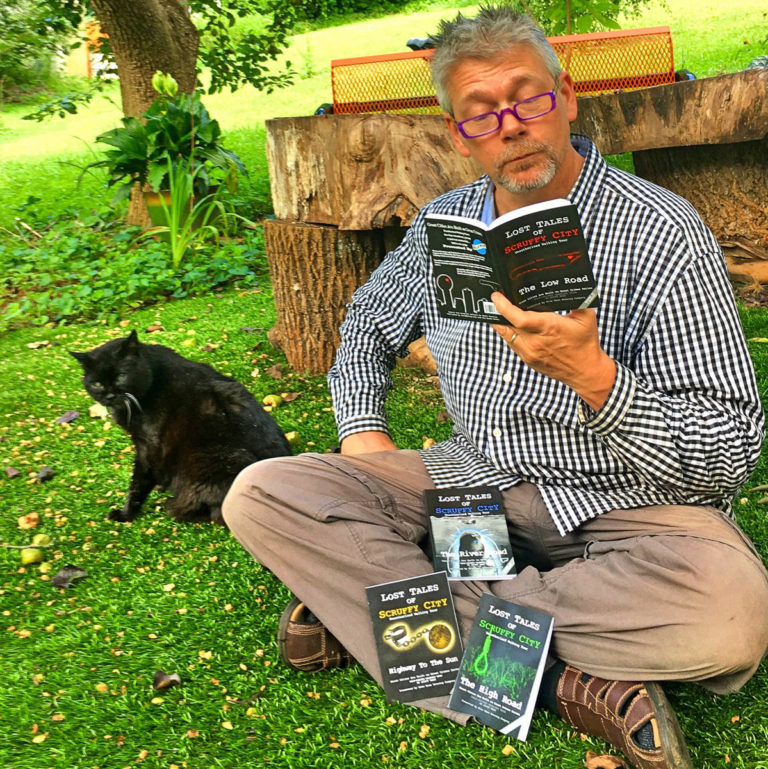 Scott West and the "Lost Tales of a Scruffy City"

Scott West has published a set of four books in the series, “Lost Tales of Scruffy City: Unauthorized Walking Tour.” Designed as a self-guided walking tour, the series takes a look at the darker side of Knoxville history, proclaiming on the cover, “Great cities are built on great crimes.”

The first expectation of those who know West might be that this would be another exploration of his own exploits as one of those crime stories. It’s true that the West’s legal misadventures are mentioned but, by my count, the mention consists of four paragraphs in over 400 pages of notable stories and sights related to downtown Knoxville.

Another expectation is borne out to be true. If you’ve talked to Scott in one of his more expansive moods – and aren’t they all – you know he can tend to chase rabbits – albeit bringing the original topic back around just when you think he’s lost the thread. Most of the time. It’s also true with the books. The reader has to hang on because it really will return to the topic and the walking tour at hand.

For those of us who have been paying attention over the years – and reading Jack Neely’s various columns and books – there are a number of stories we’ve heard before. West credits Jack as having done the hard work. Still, the collections feel fresh as they are viewed through West’s particular lens on the world. The stories are often given a funny and sarcastic spin. There is no dry academic language in these pages. It’s fun and that’s the point.

Why put out four walking tour pocket books about Knoxville crimes, scandals, controversies and twisted tales? Because nobody goes to the OK Corral to see the cacti. By embracing our sordid past we welcome a splendid future in downtown Knoxville.

The reference to the OK Corral is an apt one for more than the reason cited. It’s a story so familiar in its telling that we assume it to be a precise recounting of what happened. But we don’t. Most significantly, the gunfight at the OK Corral didn’t happen at the OK Corral. It happened just down the street. Does that matter to the story? No. Similarly, some of the tales included in these volumes have probably lost some of their specific details over the years. Does that diminish the truth of the stories? No.

It’s also important to understand the purpose of these volumes is to have fun, not take ourselves too seriously and to enjoy the rich fabric of stories – both apocryphal and precise – that produced the city we love today. Sometimes the facts of a story may be lost but the tale establishes a narrative of who we are and who we will become.

All that said, there are many, well documented and factually precise stories and points of interest included. These books are far more than a collection of tall tales. While it may treat the pursuit of Bigfoot by Mayor Tim Burchett with the same dry telling it presents a well documented story about TVA or the World’s Fair, the two are easily discernible if one wants to parse fact from fiction.

So, what remains after those caveats is a compelling re-telling of virtually every story I can remember about buildings, people and events in and around Knoxville. And they definitely include stories from surrounding areas one cannot see from any vantage on a walking tour of the city. This inclusion of tales from the area makes the books better as a comprehensive view of the fabric of east Tennessee life and more difficult as a walking guide. It’s a lot of reading.

In addition to comprehensive information, the collection of photographs, both current and historic, alone, is worth more than the price tag. The graphics are nicely done by Brett Winston, inviting the reader in to the tales and setting the comic-serious tone with graphics of a noose, a bloody knife (with a heart!), a shackle attached to the top of the Sunsphere and a giant catfish poised to consume an unwitting diver. Inside the books, the collection of photographs is expansive and stunning. I had no idea we had photographs of some of the people and events pictured.

So, my humble suggestion, after reading all 462 pages, is that the five dollars for each volume is a totally worthwhile purchase for anyone interested in Knoxville and surrounding areas. The stories are well told and often funny. The photographs are priceless. Having all of it collected in one set of books is well worth more than twenty dollars. The pocket size is perfect for carrying around and reading repeatedly.

As for a walking tour, I would strongly suggest reading each book before attempting to walk the routes. Highlight the things you really are able to see and want to see along the way. With your highlighted book, take a walking tour, flipping to the parts you’ve selected.

History is complicated. Rarely do we have the pure facts of a particular era or event. Often what we believe to be true is shaped by a slanted telling – winners write history, right? I was taught many “facts” about history that I now question or outright reject. This is one telling and should be taken as that. It’s a fun, thorough and entertaining telling. Buy your copies and enjoy them whether for the walking tour, the history or the photographs. The money is slated for good causes, with all profits donated.

The books are available starting at 10:00 AM this morning at Earth to Old City. They are also available at Scruffy City.com and at The CrookBooks.com.