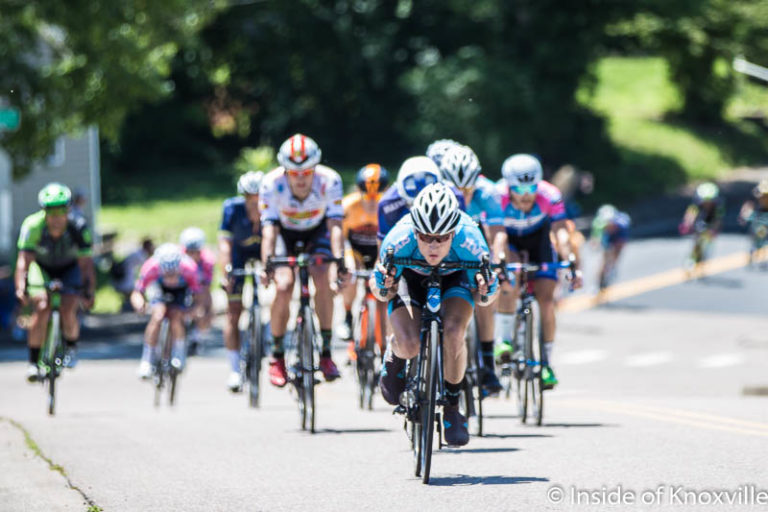 It’s the second year of a three-year run for Knoxville hosting the USA Cycling Pro Road, Time Trial and Criterium National Championships. It’s quite an honor for the city to be selected and the USA Cycling group seemed pleased last year with the event. Pleased enough to extend the run. And if you were there, you understand why they’d be pleased. It was simply one of my favorite downtown events in the eight years I’ve been covering downtown – and I’ve been to a lot of events.

Last year, I have to confess, I didn’t really “get” it until I was there. I arrived just as the women’s race finished and was set at the starting line to shoot the guys. That’s when the idea occurred to me to walk the route and shoot the riders every time they caught me. What followed was an absolute blast. It’s likely the closest I’ll ever get to the rush of a Tour de France.

The athletes are simply stunning and Knoxville absolutely sparkled. It had it all: breakaways, climbs, a peloton and always, always, a beautiful backdrop.  Go back and look at the photos if you missed it. They capture just a little of the magic you can anticipate from this year’s event.

If there was one thing missing from last year that would have made it better, I would say it was the massive crowds it deserved. The crowds were good. Spots along the way were even crowded. The Old City and the climb in south Knoxville, particularly, were exciting. That said, there were long stretches with very few people and it would be great to see all those spots filled. Very few lined James White Parkway, for example, and it would be great to see the few people sprinkled there turn into a great crowd.

And here’s the thing: It’s going to be even better this year. We’ll have the men’s and women’s time trials like last year. For those who don’t know, this event features a single racer taking on a set course, followed by others with enough spacing that they never interact. It’s just man or woman vs. the road and it carries its own kind of excitement. You’ll find that course here. This event takes place on Thursday in Oak Ridge along Melton Lake Drive.

Friday night is when one of the most exciting portions of the weekend’s events take place. It’s important to take note of it, because there will be people attempting to come downtown who are surprised on Friday night by road closures. Essentially, a very tight (1.1 miles) loop will be established downtown with a men’s and a women’s race called a “criterium.”

Gay Street will be closed for the event which will feature some of the best race watching of the weekend. Women start their 75 minute race at 6:15 PM and the men start at 7:45 PM and end at 9:15. It should be a beautiful twilight spectacle and the bonus is that with such a tight loop, fans will be able to see the racers every couple of minutes for the duration. Compared to the longer road race, it will feel like continuous fun. You can see the route here.

The event skips Saturday, giving the cyclists a day of rest after the trials and criterium, and that opens up downtown for the Pride parade and Pride Fest. When the racers return on Sunday for a full day of racing, Gay Street will be the start and finish for this year’s road races, a change from last year. I wonder if there have ever been three consecutive days that Gay Street was closed for a period of time on each day? I doubt it.

Sunday’s events start and finish on Gay Street and the women’s race is off at 9:00 AM, finishing about noon, after which the men’s race will begin. You can see the race course here. The loop runs 7.9 miles and follows the same path as last year, out across the Gay Street Bridge into south Knoxville and back via the South Knoxville Bridge. The women will complete the loop eight times for a total of 62.8 miles, while the men’s race runs fourteen laps for a total of 109.9 miles.

If you have an interest, I’d ask you to come out and give this a try. I doubt you’ll regret it and the televised event spotlighting our city will look better with you in the picture. Get here early to comfortably secure a spot and relax as you watch world-class athletes doing their thing in your home town. Race viewing is free, but if you’d like some perks like a shaded dining area, food, drink, nice restrooms and soft chairs at the start/finish line, you’ll find tickets here.