The Corner Lounge is Returning to Its Original Location! 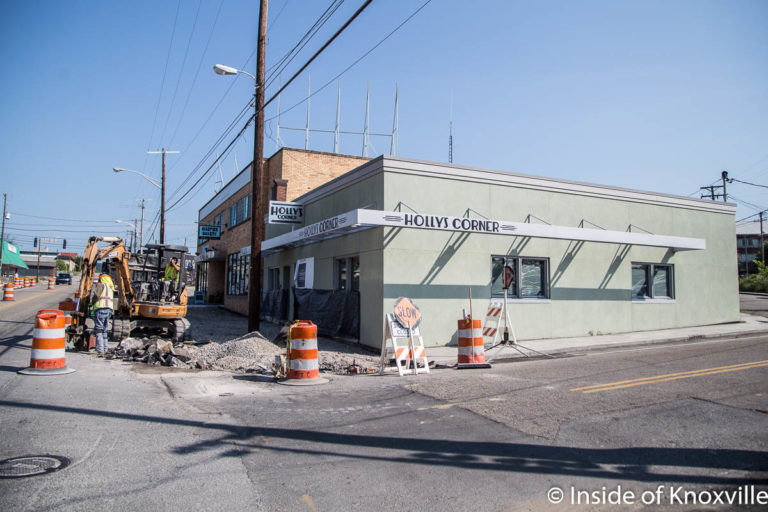 When Steve Brandon and John Harbison talk about their plans to bring back the Corner Lounge in its original home at 842 North Central, the excitement comes through in everything they say. Steve said, “The idea is to bring back the original vibe.” He clarified that perhaps without some of the seedier elements of some of its earlier incarnations, but he wants it to be a true neighborhood bar and a place where grownups like to congregate.

For readers new to Knoxville or otherwise unfamiliar with the earlier incarnations, Jack Neely wrote an article about the spot (thanks to Ian for its availability) in Metro Pulse about fifteen years ago. He said the spot first opened as the Dutch Diner around 1937. After a couple of other incarnations, it became the Corner Grill by 1942. In the 1960s it began to be known as the Corner Lounge and featured, famously, Con Hunley, on its stage for a decade. The bar merits a couple of mentions in Cormac McCarthy’s Suttree, which is set in the early 1950s. Read Jack’s article for much more information.

In the last fifteen years, the address has been through various incarnations, including Central Street Books. Most recently it was home to Holly’s Corner which opened in late 2013 and closed in December of 2017. The building is owned by Holly’s sister Peggy Hambright and Scott Carpenter and is adjacent to Magpies. When Holly’s was set to close, Peggy asked Steve if he’d be interested in doing something there and he enlisted John immediately and the two knew precisely what they wanted to do: bring back the Corner Lounge. He said he told her, “I want to make it a place that when you have been snowed in for three days, this is where everyone comes to catch up.

Steve got his start in the hospitality world working at the Helmet Head, a biker bar, at the cabana across from what is now Barley’s. He moved from there to Manhattan’s, where he got to know Peggy and worked as bartender, helping run the business. He also operated Wild Mountain Honey. His friend Shawn Blair first put him behind a bar and he says, “I found out what I’m good at. I love this city and taking care of people.”

There’s a mural that once hung in the Corner Lounge – and might possibly hang there, again – that portrays Dean Martin, Sammy Davis, Jr. and others in a lounge and that’s part of the vibe he’s trying to bring back – the classic era of lounges from the 40s and 50s. He mentions Toots Shor, the legendary New York saloon keeper as a paradigm. It’s, “back when you went into a saloon or bar, got an original cocktail and you were engaged. We want to take care of the neighborhood.”

He says they are bringing in experienced bartenders and servers and says, “Bartending is knowing when to talk and when not to talk. We engage customers to make sure they haven’t been over served and we maintain that connection that makes patrons feel safe. We do not want them to over drink.  We want them to be safe and comfortable and they will come back.

The original bar will be returned to its spot after a refurbishing. A beautiful wooden panel harvested from the Southeastern Glass building will likely be retained. Tall and short tables will fill the center of the room and a bar shelf will be added to the perimeter of the room. A small stage will be constructed and music will be featured on the weekends initially, but may expand. They expect to have a range of genres, but jazz was mentioned several times. “There are so many talented musicians in the city.”

They will offer simple cocktails and good wine, along with several beer taps. They hope to work with some of the nearby breweries and other businesses. “We’ll have nice, well done cocktails with as many local ingredients as possible. We’re keeping it simple. Sometimes complicated gets complicated.” He said the last part with a chuckle. They will have a beer engine, two quarter pulls and firkins and pins of special releases. They will also have simple food, focusing on fresh sandwiches.

Originally from New York, his family moved to Morristown and he left home at nineteen to work in the family horse business in Florida. He made his way home and says he remembers coming by the lounge when Ed Corts owned it. He lived on Oklahoma in those days and would stop by on his way home from the Old City.

John, born in Knoxville and raised in the area, has spent twenty-seven years in the service industry and the two have known each other for many years. When his job was recently discontinued, he was looking for a new direction. He and Steve had been talking for a long time about the possibility of a venture from a food truck to a restaurant or bar. When Steve pitched this idea, John was on board immediately.

The hours and days the bar will be open are still in flex, though it will be roughly 4:00 PM to Midnight or 1:00 AM. It will not be the bar to shut the night down. Their friends have been excited and the Facebook page already has nearly 400 followers. Join in by liking the page and following their progress.

The construction is being handled by David Decker and Holston Construction and architectural design is by Colleen Riordan and Johnson Architecture. Outside the building, as you can see in the photograph, there is some serious street work underway, which should conclude about the same time as the internal construction, making everything pop for the opening which, they hope, will be in August.

Steve wraps it up, “People have to realize how sweet this town is. I want it to be a time machine and I want people to feel at home.”