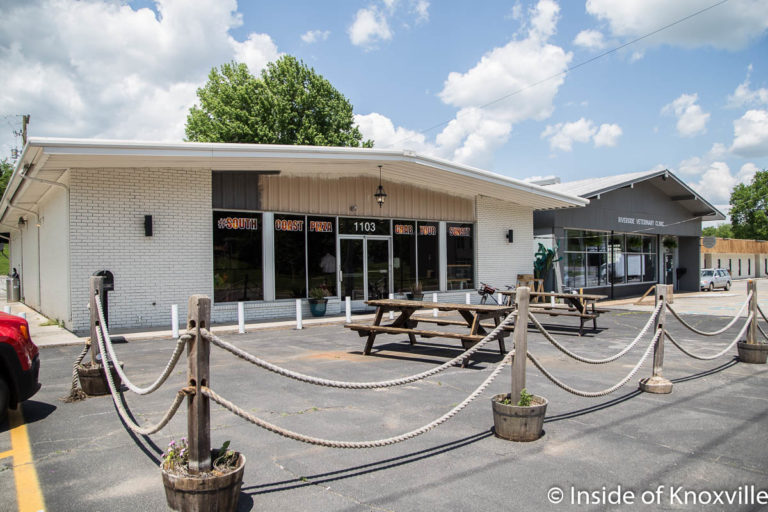 It took a little longer than expected to open South Coast Pizza – there were hiccups with power supplies and other things – but Chris Morton circled the date and said it had to happen. And it will. As we talked about the vision he has for his new business at 1103 Sevier Avenue an inspector from the fire department was the vortex of some chaos around us until he announced he would give the go-ahead.

Eric Moses who has, “been in the pizza business for a decade,” will be once again making the pies and serving them up starting Wednesday afternoon at 4:00 PM when the store officially opens for the public. After some trial runs with friends and family, Chris feels they are ready.

He’s excited about the venture in several directions, the primary one, of course being the pizza that he’ll serve. He pointed out that it will have no added ingredients most pizzas have like, “anti-caking ingredients in the crust and preservatives in the sauce. It’s more expensive than other ingredients, but I want it to be wholesome. That’s how I eat at home.”

He says they’ve experimented with flavor profiles and some worked, while others, well, not as much. They’ve settled on some taste combinations they think you’ll really like. He wanted the pizza crust to have a little zing to it to compliment the sweet sauce and, as a result of the experimentation, it will have both honey and apple cider vinegar. He’ll be smoking his own wings, making his own sauces and hummus, and his mother will make all the desserts.

A simple place for people to come together, meet their neighbors and make new friends is a concept he feels passionate about. The tables are designed for people to meet each other and he’ll have no televisions. He wishes people would leave their cell phones and tablets in the car and enjoy good food with real people.

His concept is that when you cross the river, you are coming to play and enjoy yourself, whether it is at Suttree Landing Park, which is two blocks from the business, or the urban wilderness which is nearby. “Grab Your Sunset,” is their slogan and they hope people will spend the day in south Knoxville having fun, eating pizza and watching the sunset on the south side of the river. The idea, like the business, is centered around family and community.

Inside the business, you’ll find games, including electronic games, a saltwater aquarium and a jukebox. No real surprises there, but he also wants to have a community board listing everything from lost cats to football schedules for the local football teams. The wall will be lined with historic photographs of south Knoxville – and then there are the strange objects hanging from the ceiling.

It’s not as much the beer can chandelier as it is the airplane parts in one quadrant of the building – a nod to the nearby airport. There are bicycles and bicycle parts hanging in another section – a nod to the bike trails in the urban wilderness. Another section has a surfing theme to go with the “south coast” idea and the other quarter of the building is waiting for customers to decide what will be hung – one has already brought in a JFG painting.

Plans for the near-to-longer term include a five-phase development of the patio which will eventually have a canopy to make it comfortable in all weather conditions. He’s planning a massive surf-board shaped table and a, “creative border.” The border is to keep the children contained and safe while they have fun.

He wants children to be able to run around while their parents feel secure enough about their safety to relax and enjoy themselves. He also plans some special events. There will be karaoke on Wednesdays and he plans to have events for children with activities like allowing them to make their own crust.

Offerings will eventually include seven taps for beer – and longer term he plans to offer Italian wines. Pizza by the slice will always be available. Whole pizzas are also available and each bear significant names, like the Island Home (a Hawaiian pizza), the Pharm (the building was originally a pharmacy) and two are named after the men and women in the Appalachian Mountain Bike Club – the Fabulous Baker Boys and the AMBC Lady Shredder.

They will begin their regular schedule on Wednesday, which is 4:00 PM to 11:00 PM Wednesday and Thursday, Noon to 11:00 AM Friday through Sunday and they’ll be closed on Mondays and Tuesdays. They will open for lunch, by reservation, for larger private groups needing meeting space with food during the business day. Be sure to “like” and follow their FB page for updates.