Making a City More Beautiful, One Piece of Wood at a Time 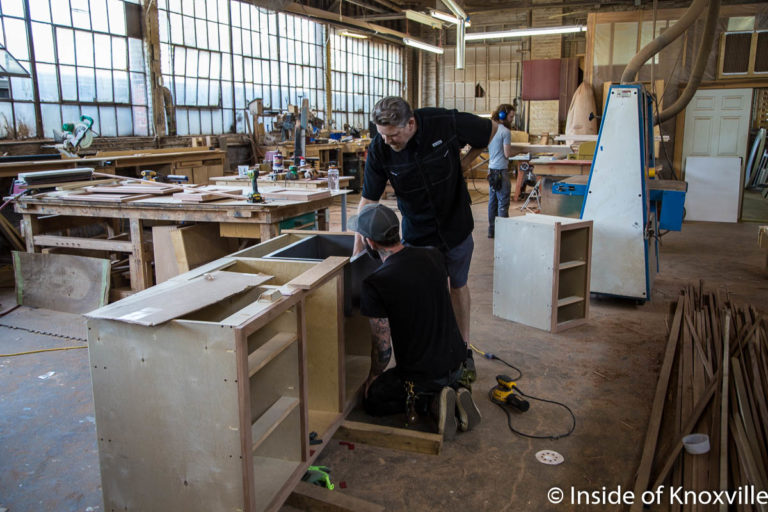 You may have seen his work around town or you may have attended an event at Ironwood Studios at 119 Jennings (Just off Central), the 17,500 square foot space occupied by his woodworking studio and Preston Farabow’s metalworking studio. The space is often converted to an art show or used for a charity event. But you probably don’t know John McGilvray. He generally prefers it that way.

I joined him at Ironwood Studios on a sunny day with a five person crew working steadily on a range of projects. He currently employees a seven person crew and generally works directly with designers and home owners. He’s been in business since 1998, so he says people have come to trust him.

He’s from Cleveland, Ohio, originally and he attended Kent State, but it was his Dad’s transfer to New York that eventually connected him to what would be a life passion. The family lived on Long Island and he worked a variety of jobs while attending college, eventually landing a construction job with a company which focused on restoring historic gingerbread porches on the homes in the area.

The photo of a porch included here is the first one he worked on. Only one column was intact when they started and the ornamental pieces at the top of each one were replicated for the project. He fell in love with the artistry required to make something so beautiful with wood. He apprenticed for four years under a man he only remembers as, “Digger,” the nickname he was always called.

After Digger left the company, John took his spot and learned to work all phases of construction, the electrical, plumbing, drywall and more, but he always found himself looking forward to the final phase of the jobs – the finishing. He loved building cabinets and doing trim and eventually left that company for one who only did finishing.

He traveled across the country and fell in love with Tennessee, but a perfect coincidence led the family to Knoxville. He and his wife, Jacquelyn, began looking for a place outside New York where they might move. When her company, Discovery, offered a transfer to Knoxville, the couple moved.

His transition to local woodworking was seamless and immediate. He rented a car at the airport when he arrived – he remembers it as a small purple car he was embarrassed to drive. He’d asked realtors, before moving to Knoxville, where the biggest houses in the city were located. They unanimously directed him to Cherokee Boulevard. So he drove there in his purple car, looking for a construction site in the neighborhood.

He spotted a job underway on a porch and spotted a Makita saw, his favorite tool. Taking that as a sign, he parked the car down the street and walked back to the site, a bit self-conscious about his long hair and beard. He walked up on the porch and began talking to the owner of the Maryville-based business. That was a Friday afternoon and he started to work for them on Monday morning. Their specialty? Porches. He worked for them for about four years.

In 1998 he started McGilvray Woodworks with a Van as an office and an ad in Metro Pulse to drum up business. He soon had to add an employee as the business grew. One of his early jobs was building a staircase and he enjoyed passing along the skills he’d learned from Digger. He got work in Gettysview and people began asking for cabinets and tables,  beds and more. He hired more people, still doing the fabricating in people’s homes.

He found his first work space in McClung Warehouses, which is where he met Preston, who also leased there. He worked there for about seven years at which time he and Preston, along with their wives, bought the building at 119 Jennings in 2006. They had been looking for a place they could own and he says they had a bad feeling about the warehouse. Seven months after they moved, it burned the first time. He would have lost everything.

Not knowing how to purchase a building, he literally bought, “Real Estate for Dummies.” Eventually, he walked into the Chamber of Commerce, got a meeting and learned they were eligible for an empowerment loan from TVA in which 30% of the building would be financed at 1.5%. Home Federal agreed to finance the rest at 7%. He remembers Steve Jones, the president of Home Federal repeatedly coming to the building. It was a deal unlike they’d done before. They made upgrades which allowed them to borrow more against the building and began work.

They were also the first recipients of the city’s facade grants in which the city agreed to pay 80% of the cost to repair and upgrade the nearly derelict building. All the windows were boarded up and many were missing or broken. Brick was falling off the exterior walls and all had to be re-pointed.

The 4500 square foot basement was rented for years to provide income until the building was paid off. Red Bull leased it for years, though it is now used for storage. An attached apartment has seen various uses – Preston lived there for a time. A front room has primarily been used as a gallery – I attended a recent show there – and the entire work space is often transformed for parties, art shows, fund raisers and even as a space for preparing the body art for Breaststrokes.

He continues to do high-end work, though they do more cabinetry, now. The recession shifted his focus in that direction and he says he has a great group of woodworkers supporting him. When he says they “make” cabinets, he means, “drawers, doors, everything. Custom to me, is being able to change without increasing the price.” They also get walk-in jobs from the neighborhood for a replica of a spindle or other small wooden objects and they try to find time for those along the way.

His role has shifted more to management, but he still does little things that he enjoys like making cutting boards – many of which he gives away for silent auctions. He does this work nights and weekends, sometimes bring in his boys, both of whom are in high school. He helped one of his sons make his own bed.

I commented on the beautiful conference table in the Regas Building that I’ve admired so much. He said they contacted him and said they had spare wood from the building and offered him the chance to work with it. Given the age of the building (about 130 years) and the length of time it took to develop the wood to the size he was looking at in the beams they handed him, he realized the wood was likely over two hundred years old and could have been 300 years old.

They carefully removed all the metal from the wood and began milling it. Calling it “dense and beautiful,” he said it isn’t easy to work with. Leaving it’s grains exposed, he didn’t stain it at all and used it to build the counter you’ll find in Vienna Coffee, as well as the large table in that space and the table in the conference room. He also pointed out that he’d covered the sides of the bar with refurbished ceiling tiles from the building and he loves how they still show the scars from fires of years ago.

You’ll see other examples of his work in this article. The replica Ringling House ceiling (in Sequoyah Hills) is something he’s particularly proud of. He and his crew just finished a major project at the UT President’s house, doing both interior and exterior detail work on the new additions.

He’s an example of someone quietly doing good work and making the city more beautiful, much in the way artisans have done for centuries in east Tennessee. Check out his work. We should all notice these intricate details in our built environment more and give the recognition to those whose passion produces the work we enjoy. You can check out the website and contact them there if you could use their skills, call them at 865-215-9933 or email John at contact@mcgilvraywoodworks.com.