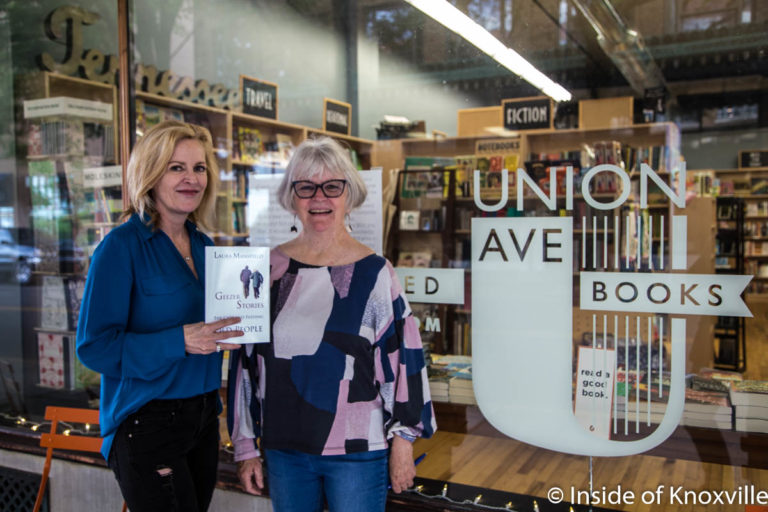 She didn’t set out to write the book. It started with posts on her personal Facebook Page chronicling the trials, tribulations and sometimes hilarity of caring for her aging parents, Gmamma and DooDaddy. The posts garnered such a reaction as people became fans of the aging couple through Laura’s writing, that she started a blog, Geezer Stories. As its following expanded and the stories mounted, it became obvious a book might be a possibility. Thus the birth of Geezer Stories: The Care and Feeding of Old People.

She wrote the book as she worked through a divorce, dealt with aging parents transitioning into assisted living and, as she notes in the book – still worrying over her (very independent and successful) son. She calls it the “taffy generation,” pulled in both directions.

She realized that many of her generation are struggling with the same obligations and as she worked through the many issues involved and wrote about them, she realized others could benefit. Still, she assumed the book would never see the light of day. She attended a writer’s conference in Nashville and paid the extra fee to get feedback from three agents. Mike Parker of WordCrafts Press was the first to speak with her about the book and he bought it.

She grew up in Knoxville and always wrote and describes herself as, “a huge reader. Books were a huge part of my childhood.” As a result, when she learned that this particular publisher donates a percentage of money from sales of their books to a charity of the author’s choosing, she immediately named the Knox County Public Library to be the recipient of the donated proceeds from her book.

Her mother, as described in the book, spent much of her time playing bridge, visiting at the country club and more engaged in the community than with her children. Her father managed Watson’s downtown for many years and was very proud of the position. Maybe too proud – she describes him in the book as a workaholic. He was also president of the Downtown Association. She told a story of the time he was shot while chasing a shoplifter. He returned to work.

She also worked downtown at various points. Some of her memories of downtown include working at Watsons and, “later as a banker at Home Federal and a licensed stockbroker at Paine Webber.” She remembers eating, “lunch with Dad at the Greek restaurant on the corner, where Mr. Peroulas would save rice pudding for us. Dad never ate during lunch hour, because that’s when all the TVA folks and everyone from Downtown came to shop at Watson’s. He was hosting a grand party, as savvy shoppers combed through the racks of salvage purchases, designer clothes, and, of course, fur coats.”

In a way, she’s consistently told stories through her career. She majored in English at UT and later got her MBA there. After some  years doing volunteer work while raising her child, she began doing marketing work – first freelance, doing some work with Chuck Morris, then worked for ten years with Ed Financial doing PR and advertising. She grew the department from one to four.

She explored social media and worked at Tombras for three years. She branched out on her own with a consulting business, which coincided with the time her parents needed her most and consulting provided the flexibility to help them. During this time, she also began writing the book and taught at UT in the school of Advertising and Public Relations. She recently returned, full-circle when she accepted a PR position at Tombras. Now she can add “published author,” to her resume.

She says the book started out as the adventures of gmamma (she pronounces it G-Mama) and DooDaddy, but the book shifted and expanded, becoming equal parts how-to for caregivers and personal memoir. The book includes rules for dealing with aging parents, starting with, “Forget the Past. Let it go,” followed by, “Forgive your parents.” Written in an accessible and honest style, this reader sometimes winced at the honesty.

She says her family has read the book and they’ve not objected – quite the contrary. She mentioned that in many respects it was cathartic for her and, it seems, the family members she writes about, agree that having their family history – secrets and all – honestly discussed is a good thing. As people live longer, she hopes the book helps spur necessary conversations about end-of-life care and decisions.

She says – and rightly so in my reading – the book is, “personal, but not sentimental” Noting how many of us spend our lives trying to please others, she just wanted the book to be honest and feels it succeeds on that level.” And, like true life, it is part tragic and painful, but also joyful, a story not only of a complicated family, but also of finding redemption and forgiveness in a world where most parents do the best they can.

Just released a couple of weeks ago, the response so far has been very positive. The book has risen steadily in ranking in the appropriate categories on Amazon. It debuted at number one in the “Hot new releases, Parenting and Relationships, Aging Parents” category. It has also sold well locally. It It’s available at Union Avenue Books and she (and I) would like to encourage you to buy it there, supporting a local business. They are on their second order

It is at Union Avenue Books that she will officially launch the book with a reading and signing event this Sunday at 2:00 PM. Come out and buy a copy, support a local author and find out a bit more about an issue many of us eventually face. As a bonus, DooDaddy will be in attendance despite rapidly failing health. You don’t want to miss a chance to meet this charmer who has become a celebrity in the wake of the blog and book.