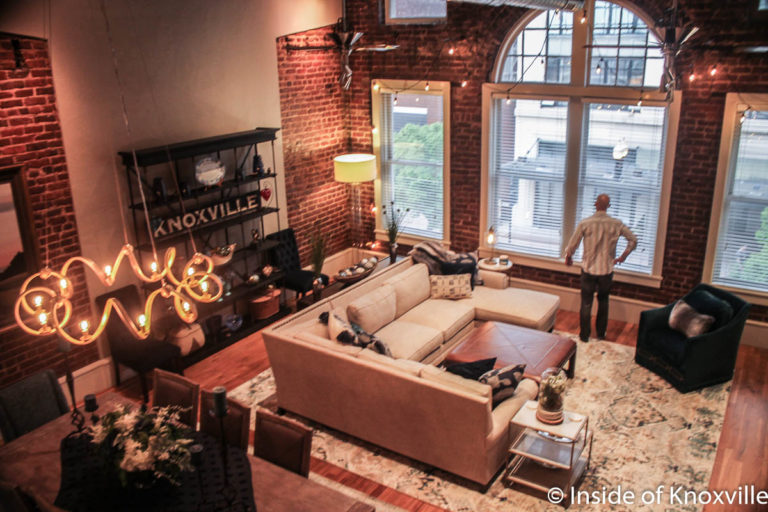 In this article, we’ll take a look at four more urban homes, ranging two a small urban homes and two larger spaces. Three of these homes are located in the northern portion of what has traditionally been considered, “downtown.” One is on the 100 block of Gay Street and two are in the Daniel Building, which opened just over two years ago.

First, let’s look at the home more in the center of downtown hustle, unit 505 in the Phoenix Building at 418 South Gay Street. The Phoenix Building, erected in 1899 and renovated into condos and commercial space in recent years, is one of the most beautiful downtown. I’ve also called it the most important player for what it provides, though that has shifted a bit since then.

It includes the Phoenix Pharmacy and Fountain, which offers great ice cream and related confections, but that business also includes downtown’s actual pharmacy – yes, it is really a pharmacy, plus downtown’s walk-in and primary care clinic and Prestige Cleaners. Those are critical downtown services that, I hope, we all continue to support.

So, it’s a beautiful building filled with essential services on street-level. It is also filled with beautiful homes above street level. The home on this tour includes a modest (by suburban standards) 1040 square feet, but it feels much larger. Massive windows overlooking the 500 block of Gay Street, including a great view of the Kress Building, bring the outside to the inside. It is a one-bedroom unit.

One of the owners included an interesting observation, which was included in the booklet, contrasting his previous life in Miami and life in downtown Knoxville:

People often ask me the difference between Miami and Knoxville. Both provide a phenomenal city life, but Knoxville people are more friendly. Downtown has more character – from the breweries popping up everywhere to the distinct restaurants. Not once have I had any issues with crime or nuisances. We are thirty minutes from the mountains if we want to explore there. You can’t ask for a better place to live.

In the Old City, two units were open for the tour, both in the Daniel Building at 118 W. Jackson Avenue. It’s another building that is slowly expanding into an important center for retail and amenities. The Old City Wine Bar opened a bit over two years ago and Rebel Kitchen, a new restaurant, was announced this past February and should be open this summer. Finally, the Old City Athletic Club, a fitness center, was announced just last month and should be open soon, leaving one remaining available commercial space.

The building, originally home to a textile manufacturing business, and occupied by John H. Daniel clothiers for many years, was converted to apartments and opened to new occupants in 2016. There are 69 residential units and the first on the tour, unit 111, is available for lease.

A ground floor unit with two bedrooms and 1400 square feet, it is set up for a small family or two couples traveling together. The massive, well lighted kitchen and living room are perfect for relaxing or entertaining. The building is a five-to-ten minute walk from anywhere in the downtown area.

Unit 421 in the same building has a much different feel. Occupant, Mollie Turner had leased in the building, but when she heard this unit came open, she grabbed it. A true loft apartment, it is perfectly decorated (she describes it as “eclectic, modern, warm neutral palate with pops of color”) and efficiently arranged. With massive windows and a beautiful view of the street below, she loves the light and the sound of rain on the exposed ceiling

The bedroom is an open loft accessed by stairs in the unit. Upon arriving at the top of the steps, the clean, simple look of the entire unit is carried forward with the simple essentials: a bed and a book shelf full of books.

The final home we’ll look at is located on the 100 block of Gay Street at 129 S. Gay, Unit 301. The first thing visitors noticed were the two flights of stairs leading up to the door of the unit. Stairs an issue for you? This is not your place. Stairs don’t bother you? That opens up a lot of spaces in the city, many of which are walk-ups or have interior stairs to the unit. This has both.

What visitors found at the top of the steps was one of the most breath-taking homes on the tour. At 2500 square feet with a massive open ceiling, and large windows overlooking perhaps the prettiest block in the city, the home feels larger than its actual size. And actually, the massive open plan for the front portion of that floor is large enough that the 11’X6′ kitchen island doesn’t feel too large.

A bedroom located to the rear of the unit overlooks a little wooded pocket behind that building and the Armature building that most people don’t realize is there. It provides a quiet, comforting space to enjoy from both the bedroom and the rear deck.

Up a floor is, perhaps, the most spectacular feature of the home: More living space that flows out onto a very large rooftop deck with a catwalk extending to the front of the building, ending at a sofa with views of the city and of Gay Street. It’s enough space with enough appeal that it’s easy to imagine simply staying there all the time. The home last sold in 2016 for $730,000.

And so, another tour ends. City People will use all the funds raised to make downtown a more exciting and interesting place to live. And they could use your support. If you aren’t a member, please consider joining. It is open to anyone who loves downtown and works, plays or lives there.

If you missed the part one of the tour, you’ll find it here.