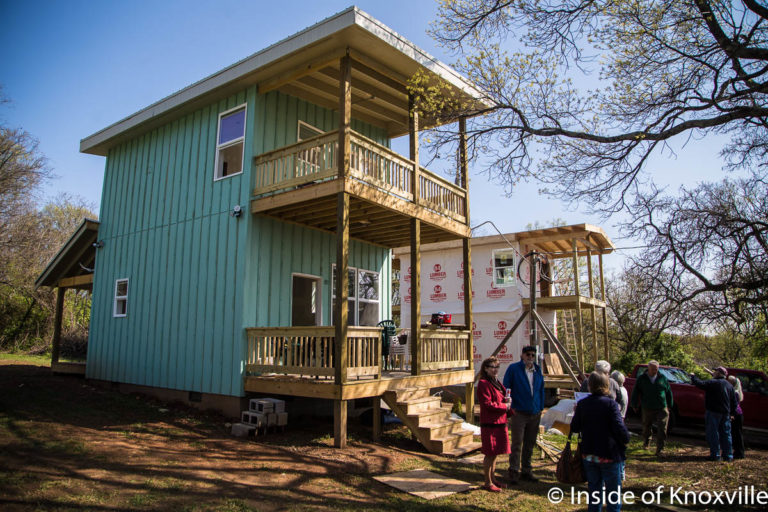 Last fall, in an article discussing the possible role of tiny homes in an urban environment, I covered the Clayton Homes luxury line of tiny homes and mentioned that I’d heard there might be a move to bring a community of the homes to a site near Western Avenue. That whisper has become a reality as Richmond Orchard listed its first two homes on the MLS this week, with occupancy planned for June and nine additional homes planned to follow.

Yesterday, I stopped in to take a look and the homes surprised me. From the outside, I would have guessed they had two or three times the 647 square feet they include. Part of my perception was, no doubt impacted by the large porches (three or four porches are included on each planned home) on the front and back of the homes. Inside, the design is efficient and the abundant windows on each side feed the perception of spaciousness.

The planned, “pocket neighborhood of planned cottages,” is the brainchild of Christine and Richard Duncan. Knoxville residents since leaving their native gulf coast homes in 1989, the two feel this type of development answers a host of needs for our area.

They’ve pursued the necessary permissions through the process for a concept that sits well outside the norm for our area. They’ve been supported by MPC and pointed out that the hilltop protection passed several years ago actually enhances their property as it will maintain its undeveloped buffer along its north side.

In terms of housing needs, they see the new development as a perfect spot for a young couple who needs an affordable entry point to home ownership. Prices have been kept around the $110,000 mark by deliberate design decisions. It could also be a perfect spot for people who want to live near downtown, but can’t afford more common downtown prices. It may also be an option for older couples wanting to simplify (while two story is the default, they can build to demand for one story homes) or for couples or individuals who want to own, but want to reserve additional assets for travel or other pursuits.

The couple is also attempting to present an environmentally conscious product. The intention is to present a community with as small a carbon footprint as possible. This starts with construction – energy star windows, tankless hot water heater, natural shade preserved as much as possible.

Insulation has high R factors, a mini-split heating and air unit allows for one floor to be turned off when cooling or heating isn’t necessary on both floors. Material for the counter tops will be provided by Lenoir City’s award winning Mark Wassenaar of Virtuous Products and is made of locally produced, recycled glass. The homes will also each include multiple ceiling fans to reduce usage of heat and air.

Landscaping will consist of native plants and the eleven homes will be situated on 2.6 total acres, which includes a road into the homes and parking. The road is made of crushed gravel and is a permeable surface, designed to avoid runoff. The grounds will also include a community firepit, a community pavillion and raised-bed garden plots available for interested residents.

Builder, David Kerns, said he hopes to have the two current units ready for occupancy in June. The next phase will involve building the road and construction of four additional units, with five to follow in a final phase. Joan Monaco of Black Willow Design also worked on the project.

The homes also offer options of color and interior features. Energy Star appliances can be added, as well as a half-bath on the main floor. A built in breakfast table which lowers into the kitchen counter is a feature that utilizes available space efficiently. All units have a full bath which also includes laundry connections.

The entire project, which is only in its ninth week of construction, should be completed by the summer of 2019. If successful, it is a project which may offer a new model to Knoxville, as well as other cities. Richard pointed out that while many cities express interest in tiny homes as a portion of the answer to community housing needs, but generally, no city wants to be first. He also noted that 1/3 of the city’s vacant lots can’t currently be built on because they don’t meet space codes and this kind of project (along with Recode Knoxville) might begin to allow the infill that would provide housing while increasing urban density.

For floor plans and further information, you can check out their website and follow them on Instagram. An Open House and Ribbon Cutting will be held April 17 at 1:00 PM. If you’d like to get a tour or inquire about a possible purchase, call Cynthia Handly Cormany at 865-696-7565. The first unit is spoken for and the second may be taken soon, so don’t wait.