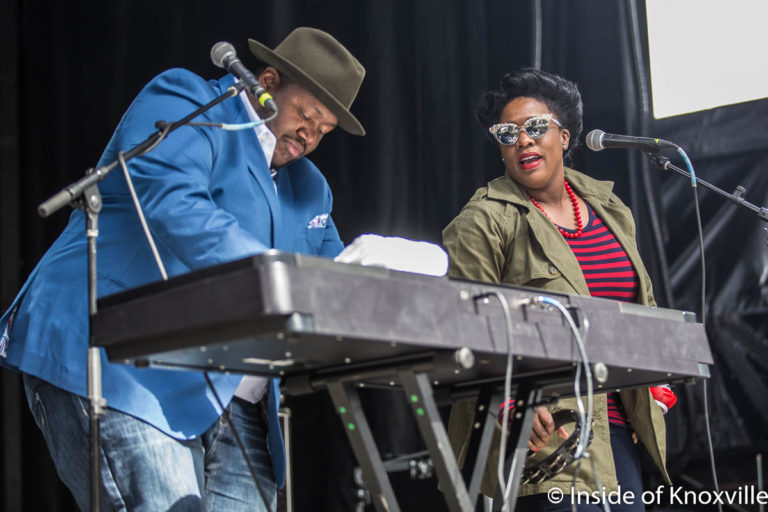 Day three started early, for me, as I headed to the WUTK studio to do Knoxcentric. Luke Brogdin of Southern Cities graciously agreed to join me for a bit to talk about their set the previous day, as well as their new music. Their See the Future CD is now available on Spotify and reflects an upbeat era in the bands evolution. Check it out. You can hear my interview with Luke plus eight or so songs from the artists you’ve been reading about who played Rhythm n Blooms by checking out the podcast here.

I’d planned to spend the last day at the main stage, soaking up the delightful (after the previous day) temps in the 40s, with the promise of  a sliver of sunshine. It was still cold. My conversation with Luke convinced me to make one foray from the main stage to hear Beth Snapp at Pretentious.

First up on the Cripple Creek stage was Okey Dokey. I like their music and had done a bit of advance listening. Sadly for them, there were about two dozen people at the large stage at the beginning of their show – and yes – I’m counting the half-dozen in the VIP section. The weather was bad. It was Sunday. People may have been saving themselves for the later artists. I felt bad for them.

The show was pretty good, though it has to be hard to be on a massive stage with that small a crowd. That said, there is a thin-line between artist nonchalance and perceived disdain. The lead vocalist seemed irritated by the whole thing to me and that pretty much ruins a show in my world. His comments and asides – he introduced the band to each other as if we weren’t there – finally wore thin, for me.

I did slip out to listen to most of Beth Snapp’s set and really enjoyed her and her songs. She played solo acoustic at Pretentious Glass (pro tip: slip into the glass blowing side if you are cold outside and even when they aren’t blowing, it’s ten degrees warmer) and had a good crowd. She’s from the tri-cities area and deserves to be watched as she develops as an artist. Her latest CD, released last year, is Write Your Name Down.

Back over at the Cripple Creek stage I witnessed the power, the joy and the glorious musical vibe that is The War and Treaty. Married couple Michael Trotter, Jr. and Tanya Blount have shaped a sound that is hard to categorize. It’s some part soul, lots of gospel – without the religion and cool rhythm and blues. To say this team can stand with any duo power vocal for power vocal is no overstatement. And the show is dynamic. I wish I’d caught more of their performances. I’ve already downloaded their music. I’d also encourage you to read their story. His, particularly, is powerful.

The Mowgli’s took the stage next and they were as much fun as I’d imagined. The crowd had grown tremendously since earlier in the day and The War and Treaty got everyone warmed up in a big way. The west coast group did not disappoint, riding their pop songs effortlessly through the cold night. It’s another band I’ll likely pursue further (you’ll hear them in the podcast above).

And then my plans changed a little and my festival ended early. I’d been excited to hear Paul Thorn, but a bit of an emergency back home dictated that I needed to scoot in that direction. All turned out well, but I would not return. Still, The War and Treaty and the Mowgli’s sent me home happy with back-to-back excellent shows.

In the end, I listened to about sixteen different artists playing about twenty hours of music. I took just over 600 photographs which, over about five-and-a-half hours of editing, was reduced to just over 250. Mostly, as has been the case other years, I found a great group of new artists to follow and enjoy. Again, check out the podcast to hear the groups mentioned here and others from the festival. Here’s to next year and hopes for better weather. See you at Rossini!

(And now, I’m taking a break. I’ll catch you later in the week!)