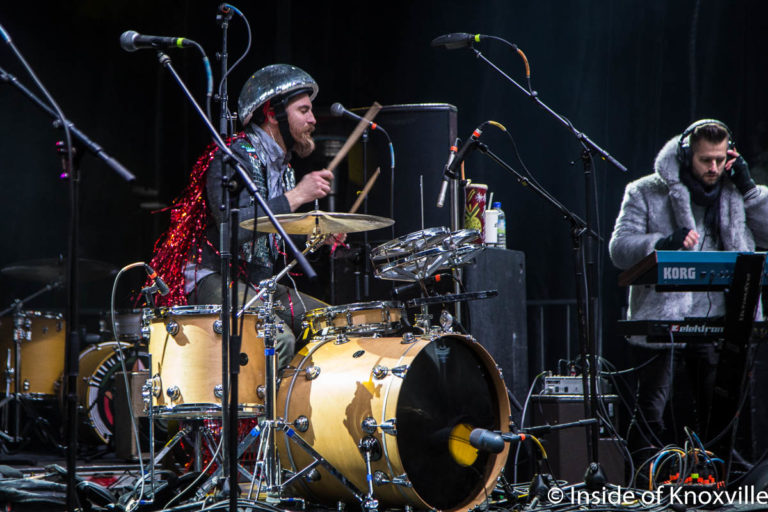 Day two is usually where the fatigue starts to set in a bit. Add to that the weather on day two – hovering in the 30s with a mist most of the day, and it became clear this would not be an easy run. I started at Pilot Light – just a little too late. Pilot Light is slammed for virtually every show and the Art Smashes Records performance was the same. I was only able to listen for a song or so before leaving for a less claustrophobic performance.

I really enjoyed Anthony da Costa’s show at Boyd’s Jig and Reel, which is one of my favorite spots to hear live music. His songs are well constructed and intelligent, his guitar playing is superb and his sardonic stories and comments between the songs were just enough to keep it all flowing. I left there to catch The War and Treaty at Pilot Light, but that was impossible – with a long line out into the street, so I walked to the main stage where I planned to settle in.

And I did, except that I didn’t listen to full sets because the damp cold was so unpleasant. I sporadically retreated to warmer spots. First up was the Accidentals and I loved their catchy pop music. Fronted by two young women, the melodies and harmonies are tight and on full display. That’s another I’ll pursue for possible purchase.

Lilly Hiatt followed and I knew I would enjoy her set and she didn’t disappoint. I’d bought her most recent CD in preparation for the interview I did last week and knew the material. She was very good and engaging. Despite the cold, she appeared to have a good time – something some of the artists seemed to struggle with more than others.

I slipped into the Jackson Terminal to investigate Penny and Sparrow. I’d heard of them before the festival, but hadn’t heard them. But it was warm and dry inside. I enjoyed their set. Their harmonies are delicately beautiful and the between song banter was funny – it reminded me strongly of the Milk Carton Kids. It was a pleasant way to pass some inside time before heading back to the not-so-great outdoors.

I tried to squeeze in a little of the Southern Cities show, but a number of stages had fallen behind – including theirs – so the timing didn’t work out. Back on the main stage, I found DK the Drummer to be one of the most fun shows of the weekend. It was musically engaging, but it was also visually dazzling. It’s the closest to Gogol Bordello in this year’s lineup in terms of spectacle and it was fun.

This is where the weather started to really wear on me. I listened to a good bit of Dr. Dog’s set, which had a large fanbase pretty excited, and started pondering my plans to stay out until 1:30 AM, the radio show the next morning and my relative misery. And really, if you aren’t having fun . . .

So, I pulled the plug at around 8:30 and went home to get dry and warm. It was the right move, for me. I heard the Midnight Merry-go-Round was tons of fun and I’ve enjoyed it the last several years, but I’ll have to catch that next year when, hopefully, we’ll get a warmer, dryer weekend.

The final installment will be out later and I’ll shoot the 250+ photos to the Inside of Knoxville Facebook Page.