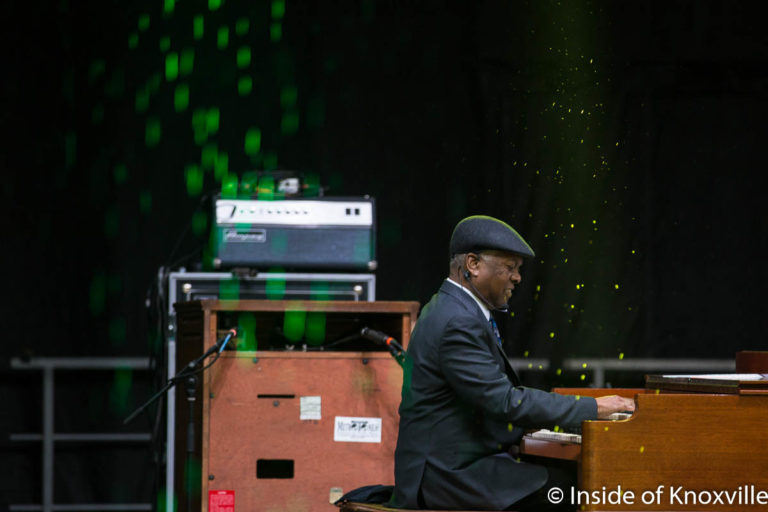 It’s always an exciting weekend for the city. People travel to the festival in large numbers and, it seems, everyone who loves music and lives here joins in, as well. While Big Ears stretches my listening, Rhythm n Blooms tends to help me find artists I will definitely love but who, for whatever reason, have evaded me, so far. Big thanks to Chyna Brackeen, Garrett Thomson and everyone who helps curate the artists!

My goal every year is the impossible: See every artist who looks interesting and enjoy their full set. A quick glance at the schedule reveals how ridiculous the idea is on its face. I tend to sacrifice local artists who I’ve seen and go with others. I look at the bios, listen to a small sample of music and chart a course. Inevitably something or another changes my plans along the way: fatigue, an artist I fall in love with and want to see a second time. This year it was the weather.

From the outset it was clear that Friday would be tough, Saturday would be worse and Sunday might provide a little lift into the merely uncomfortable range. I’d planned to catch the Young Fables at the Jackson Terminal Building, but realized that would mean two walks in the rain – there and back from the Cripple Creek stage (under James White Parkway) – and decided to spare myself and the camera equipment from at least that one dose of moisture.

That freed me up to start with WUTK’s Battle of the Band’s winners Gag Me on the main stage. They were fun, cute and all punky. They get extra credit for sheer exuberance. It was one of several shows I shot with the photo pit to myself. That led immediately into one of my most anticipated artists: Booker T. Jones. Most people know “Green Onions,” from 1962, the signature song for Booker T. and the MGs, but many people don’t realize they had 18 charted hits over a twelve year period, including three top ten hits.

That all ended in the early 70s, however, and Mr. Jones has continued as a solo and side artist, playing with many of the greatest artists of our time and recording continually excellent and relevant music on his own. His most recent (and tenth) solo album, Sound the Alarm (2013) marked his return to Stax records for whom he recorded with the M.G.s. He performed an excellent set of updated hits and music from the entire R&B catalog, including an excellent “Purple Rain.”

Deer Tick followed and delivered an energetic set to a crowd that included many who seemed to have come to see the band. Meanwhile, I was cold, wet and miserable, so after listening a bit, I took the chance to stop into the Old City Wine bar where Matt (the Sommelier) suggested a fancy little wine and I had Rebel Kitchen’s great short ribs. Warm and dry, I left for Jackson Terminal.

Secret shows (which aren’t exactly secret – they are on the schedule) which feature unannounced performers are a great way to catch several of the artists at once, in an unusual combination and, often, just having fun with musician friends. Such was the case for this great secret show featuring Andy Wood, Dave Kennedy and Daniel Donato. They included a ton of classic country covers embellished by stunning guitar work by Andy and Daniel, as well as a pedal steel player whose name I didn’t get.

I stayed there to catch the Caroline Spence show and loved her set. She’s a strong writer with an excellent voice and a powerful presence. She’s one I’ll check into for a purchase. Afterward, I walked to Barley’s for a midnight secret show which I’d heard would include Deer Tick and I wanted to give them another listen. I stayed a bit and decided they just aren’t my thing, so I set out to walk home through the rain.

Only I didn’t make it – stopped in my tracks by the music coming out of Pilot Light. The Trongone Band, from Richmond, Virginia plays driving rock and roll with accessible melodies and a solid stage presence. They pulled me inside where I stayed until the end of their set – sometime after 1 AM before walking home in a steady rain, tired and happy.

I’ll hit you up with days two and three, soon, as well as a treasure trove of about 250 photographs on the Inside of Knoxville Facebook Page. Stay tuned.