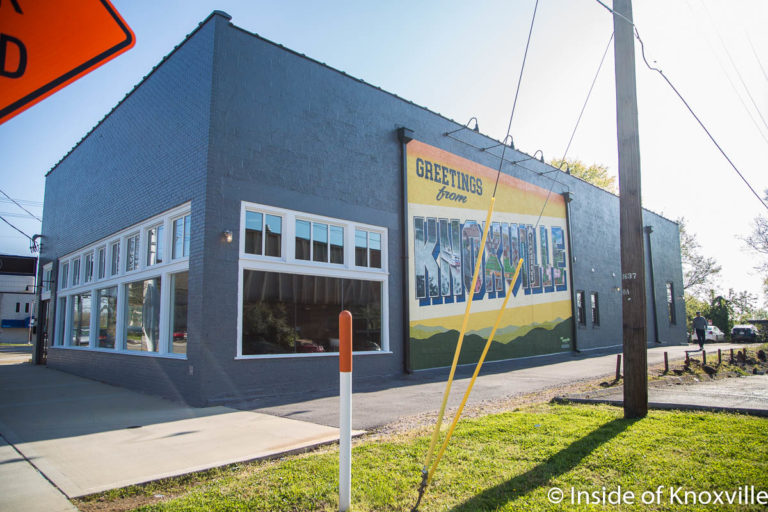 In February, Luke Lanzoni announced his intentions to open a men’s clothing store in the downtown area. His intention then, as now, is to have a store near Market Square. He also, however, is keen to begin offering his merchandise to the downtown area and that perfect near-Market Square location hasn’t presented itself. In an effort to get underway, he’s found what may well be a perfect  North Knoxville location.

The building at 1134 North Broadway has already won a beautification award for the striking mural on its side. It’s located beside the highly successful K Brew and is home to the manufacturing end of Nothing Too Fancy. While they utilize the back two thirds of the building, the front third is currently not in use and, thanks to Dustin and Lisa Burnett, has a very cool industrial vibe with re-cycled barn wood and windows on one wall, massive Tennessee and American flags hung from two walls and an amazing amount of sunlight from the massive windows facing Broadway.

At this point he’s looking at the current address as home for Felding, Co. for the next sixth months and he’s excited to be in North Knoxville and near so many great businesses like K Brew and Elkmont Exchange, with whom he’ll partner for his upcoming Grand Opening on May 4th (First Friday). After his very successful pop up last month at Rala, he originally considered the Broadway location for another pop-up, but after talking with Lisa and Dustin, decided to make it a longer-term arrangement.

He’s also excited about the merchandise he’s accumulated. I found him wearing a new KNX cap handmade by Ebbets Field Flannel in Seattle. He’s gotten those and a number of other custom products in since the last popup sale. He’s sourced a short sleeve chambray shirt from Denim and Spirits from Nashville. The handmade shirt will be printed by Nothing Too Fancy, giving it a Knoxville element. He’s added lots of lifestyle products selling for less than $100.

He’s looking at the next six months as a time to ramp up and connect with his customers before the move into the heart of downtown just about in time to introduce the fall/winter merchandise. In the meantime, he’ll be stocking the new store (see extensive list of brands in first article) and preparing for the grand opening on May 4th. Parking is readily available in a large gravel lot across the street, so make plans to join him for his kick off and celebrate a new option for menswear.