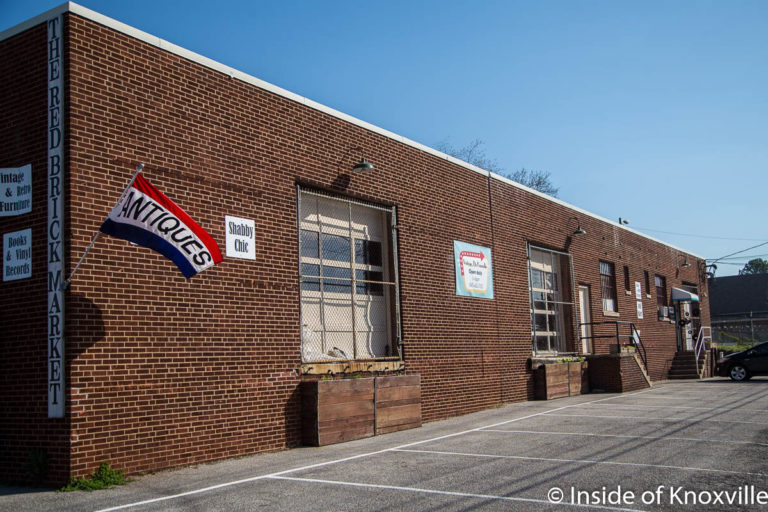 It’s been a bit of a moving target over the years, for various reasons. I first wrote about it in February 2013 when a second location for the west Knoxville business opened a half mile out of the Old City. Nostalgia on McCalla represented a push of downtown’s eastern boundary at the time and the location is still on the edge of recent development.

Over time there was a shift in ownership. In January 2017 Jeff Bolin sold it to three of the vendors and it became Red Brick Market, which I reported last March. Subsequently, Jeana Vaughn, the co-owner I interviewed for the article last spring, became the sole owner when the lease expired this January and she re-branded the business as Vintage, Etc. Knoxville.

She continued to rent on a temporary basis and she told me she began to seek other locations. Area rents had increased substantially since their lease and it seemed likely continuing in the same location would not be a good long-term plan for this type business. She said that, as they had been from the very beginning, owner’s Nancy Voith and Kenneth Stark were great, but both parties agreed that they could end the arrangement when something better offered itself for either.

A new tenant was ultimately found for the space. I emailed with Bart Mitchell, the leasing agent who said,

The new tenant locating to 1401 McCalla Ave at the edge of the Old City will be “Automation & Industrial Manufacturing Equipment” OR “AIM Equipment”which provides Global sales, training and maintenance personnel for Automated Robotic 3-D Tube bending machines for the Aerospace, Automotive and Construction Industries.

After discussions with the companies President, He and I determined that this location was best suited for his companies needs, not only due to the buildings physical attributes but also for its close proximity to downtown Knoxville. The company has out- of- state and International clients who can fly into Tyson airport, stay in downtown hotels and have dinner/entertainment venue access while in town for company equipment demonstrations and/or training.

All of which meant Jeana and her business had to find a new location. She looked in every near-downtown spot she could find, but ultimately failed to find a space that was affordable and fit her needs. While not ruling out an eventual return to a downtown space, she has leased a space at 3000 Tazwell Pike in Fountain City. It’s much smaller – 2,000 square feet as opposed to the 11,200 square feet at the current site – but it feels like the right fit for the time.
While that might seem like an impossible downsizing effort, it turns out that the current building could have housed up to around 80 vendors and there are currently 32 in the space. That number will be reduced slightly with the move. Twenty-four will move into the new space and she says the attrition was mostly due to life circumstances, not so much the move itself. She noted one is graduating and moving on, another has moved to Atlanta, another wants to focus on online sales.
The plan is to have everything out of the current location by mid-May and to move directly into the new building. Jeana says she hopes to have no closed days and, in fact, both locations may be open for a few days during the transition. Vendors have marked a number of items down in order to avoid having to move as much merchandise, so this may be a good opportunity to get a good deal.
She says she’s enjoyed her time downtown and she’s learned that you can take a hobby and make it a business. She says she’s made the realization that you can have joy every day when you go to work if you have the work you love. While learning a lot about people and business, it’s the thrill of seeing a happy customer reminisce about a piece they’ve found that reminds them of their childhood or their grandmother’s house that makes her happiest.
While the sales at the current location have been good from the beginning, she said retail outside their space has struggled to find a foothold in the area. She says when Mighty Mud moved it reduced the foot traffic considerably. So, there were multiple factors that led to the decision to move four miles to the north, but it feels like the right move and she’s hoping you’ll drop in to say goodbye or find a bargain. And she’s hoping you’ll take that four mile drive and see them in their new location.