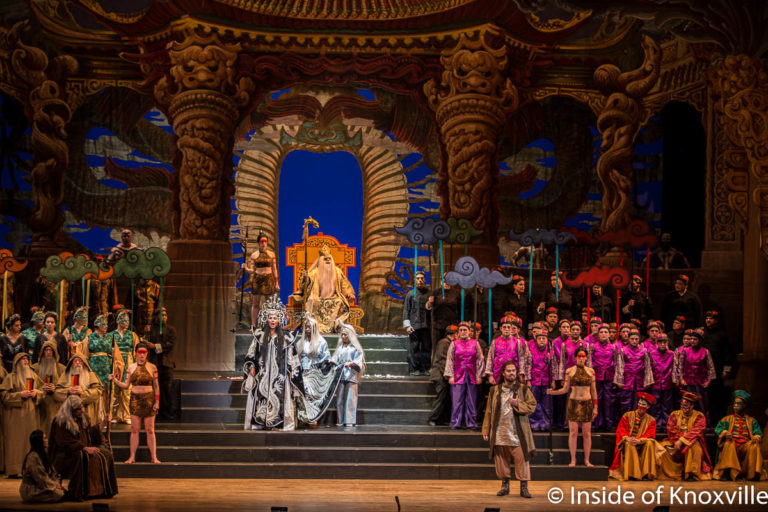 Knoxville Opera performs Puccini’s final opera (it was completed by Franco Alfano after the Puccini’s unexpected death) Friday night at 7:30 PM and Sunday afternoon at 2:30 PM. The performances will be in the Knoxville Civic Auditorium, not the Tennessee Theatre as is typically the case for Knoxville Opera performances. Forty-five minutes before each performance, Maestro Brian Salesky will discuss the background, story and music of the opera with audience members who arrive early.

Topping the bill is Canadian-American soprano Othalie Graham, who has received critical acclaim throughout North America for her interpretation of Princess Turandot. Tenor Jonathan Burton – last seen in Knoxville as the painter Cavaradossi in the innovative 2015 production of Tosca – returns to Knoxville Opera as Prince Calàf. Korean soprano Yunnie Park makes her Knoxville Opera debut as the servant girl Liù.”

The story is based on a twelfth-century Persian tale, though the original princess was Russian. The setting was eventually shifted to China and the princess became Chinese. Of course, it is sung in Italian with English translations above the stage. Puccini adapted and incorporated three Chinese melodies, including that of the Chinese National anthem. Considered to be one of the most challenging musical pieces to perform, it was first conducted by Toscanini in 1926, two years after Puccini’s death.

Critical acclaim has been mixed, though the opera is considered one of the iconic pieces of the genre. Much of the debate has centered on the ending and multiple endings have been written. Alfano, himself, wrote two different endings in an effort to satisfy Toscanini. Pavarotti offered a definitive performance of some of the work and artists as far flung as Aretha Franklin have taken a turn at the production.

As operas go, it holds its own with the more violent, although the violence is not acted out on stage. Turandot (the word roughly means “the daughter of Turan,” is a princess who has not married, though not for lack of suitors. She has decided she is inhabited by one of her royal ancestors who was carried off and “owned by one hundred men.” She insists she will not be owned by any man.

She has, however, agreed to a sort of perverse dating game, in which if a suitor successfully answers three “enigmas,” or riddles, she will agree to be his wife. The downside to attempting to thusly win her hand is that to fail to answer the riddles results in the death of the suitor by beheading. It’s a high stakes dating situation. Dozens have tried and dozens have failed, their heads prominently displayed to discourage future attempts.

But, of course, there is one more attempt. A final suitor casts off all who would discourage him and attempts to win her hand. He’s more successful than the previous young men, but there are complications which might result in many more deaths if he persists. The pursuit of love is no simple matter.

As always with Knoxville Opera productions, the staging, costumes, choreography and music are excellent. Costuming might well be the centerpiece (besides the music) of this production, with vibrant colors abounding. As I’ve written before, there are many ways to enjoy the opera, and the visual aspect is just as rich as the music offered.

Tickets are still available for the larger venue, starting at $23. You’ll find them here and you’ll be glad you did. As always, I’ll post many additional photographs later today to the Inside of Knoxville Facebook Page.