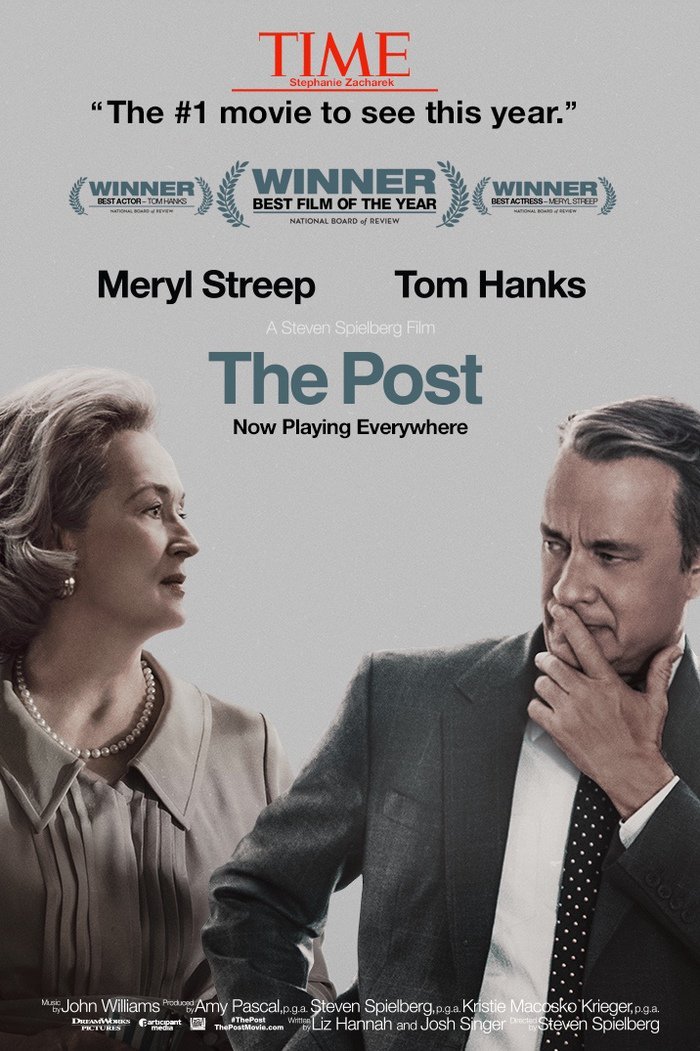 Just in case you are worried, no, I’m not going to attempt become a film critic. I actually see very few movies, never seeming to have the time or quite enough interest, particularly in what passes for major theatrical releases in 2018. This one, however caught my eye, given the journalistic topic and the fact that it was offered downtown and accompanied by a panel discussion of media and its varied roles.

It’s hard to imagine any of you would be less informed on the topic of current release movies, but just in case you’ve missed it, The Post is a movie, released late last year starring Meryl Streep and Tom Hanks and directed and produced by Stephen Spielberg. It follows the story of what happened at the Washington Post in the days after the New York Times first published the Pentagon Papers, which revealed the U.S. government had lied about the Vietnam War through several administrations.

President Nixon had his Attorney General issue an injunction preventing the publication of the papers. As they awaited a hearing, the Washington Post came into possession of the same files and began publication. The decision to publish in the face of possible prison time was made by Washington Post owner Katherine Graham. Ultimately, the Supreme Court backed the Times and Post saying the first amendment to the Constitution barred the government from “prior restraint.” In effect, it cannot dictate what a paper chooses to publish or not publish.

In the panel discussion that followed, Dr. Michael Martinez of the UT School of Journalism said that James Madison specifically wanted the Constitution to protect the press, given the experience in England, in which the king had controlled the press through removing licenses to publish or giving jail time to those who published what he didn’t approve. Susan Packard, co-founder of Scripps, discussed the difficulties of being female in a male-dominated industry.

Harry Moskos, former editor of the News Sentinel cited cases in which the Sentinel went against a court injunction to publish information. The panel also discussed the chilling impact current legislative efforts have had on the flow of information to the public. You probably know that public records in Tennessee are supposed to be public, right? According to the Tennessee Coalition for Open Government, there are 538 public records exemptions in Tennessee law. Again, for those of you keeping score at home, that’s Five. Hundred. And. Thirty. Eight. situations in which your legislature does not feel you have the right to public records.

The national parallels with the era the movie covered with our current era could not, of course, be ignored. The current daily attacks on the media from the White House along with the constant refrain of “fake news,” has taken a toll on the public perception of the media, which was actually held in high esteem a generation ago.

The impact was even seen in one of the questions posed from the audience, in which an audience member stated the News Sentinel is liberal and, as evidence of the inherent bias of media, he cited journalism graduates who stated they wanted, “to make a difference,” which he interpreted as meaning insert their own bias. Several people answered that “making a difference,” could, more likely, mean pursuing the facts, which is the root of good journalism.

These and other variables make for a challenging time in journalism. Can forty people watch the local government as closely as 119? Will a local newspaper owned by a national company be given the latitude to do investigative journalism? And an audience member pointed out the current practice of presenting both sides of an issue when one is factual and the other isn’t, creating a false equivalence.

So, it was an illuminating movie and conversation. As always, it left me considering the work I do. Without a background in journalism, I’m often searching for guidance regarding the sometimes difficult decisions of what and how to cover downtown news. Rest assured, it’s something I take seriously and attempt to do ethically and with integrity. My work is not without errors of fact and judgement, but the intent will always be good and I appreciate your patience with me while I explore this crazy, modern journalistic terrain.