An Art History Scavenger Hunt in the City 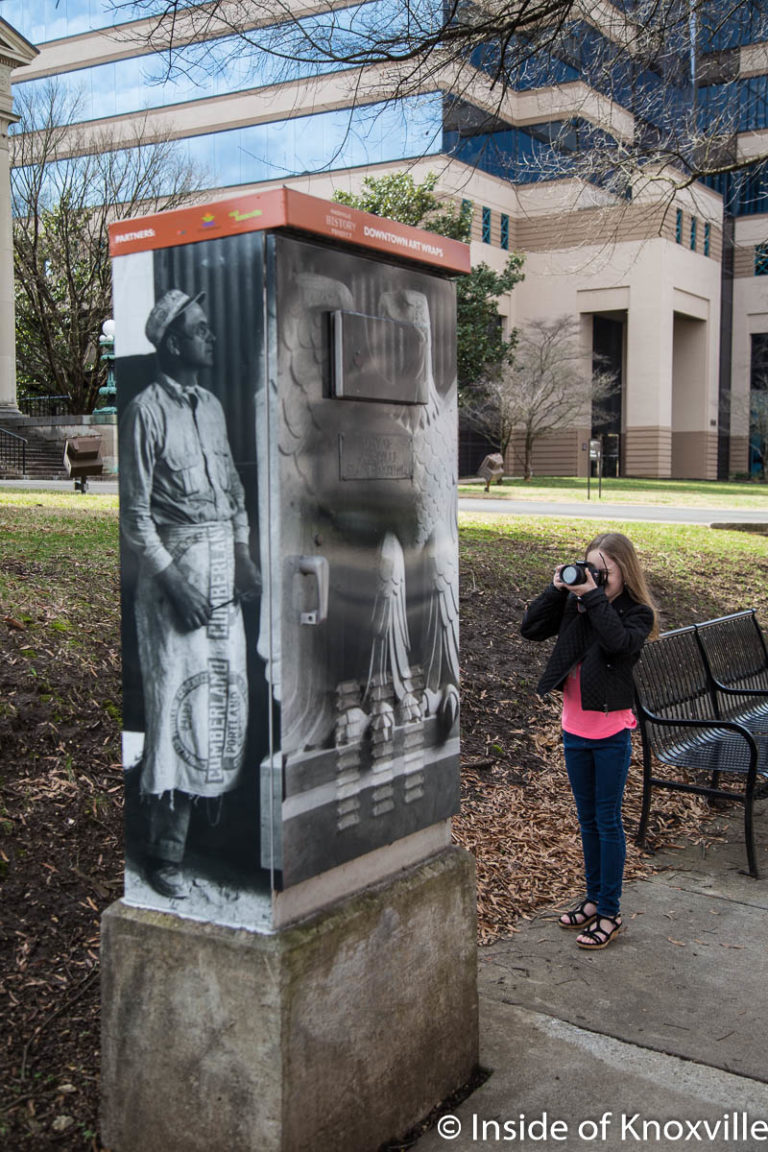 A lot of us have found ourselves in similar predicaments in recent days: An extra child or two is lurking about underfoot when they, by all rights, should be at school. Whether because of ice, snow, extreme cold, flu or teacher work-days, there they were. Sure, Urban Girl, like so many of your children, would just as soon veg-out all day in front of an electronic screen of some sort, but we want more for their little minds, right?

And so it was, yesterday found Urban Girl hanging out in the city once more. Thanks to a fluke of nature, or climate change, perhaps, the 20th of February went down as one of the warmest in our history, with temperatures topping out around seventy degrees. The day also offered a rare glimpse at the sun for our water-logged region.

All of which led to a perfect opportunity to explore the city. It’s hard to impress Urban Girl with a walk in downtown Knoxville, since she’s been trudging around these city streets with me her entire eight-year-old life. But the girl loves a good scavenger hunt. And the Knoxville History Project provided me with just the perfect object of our search: their art wraps have expanded quickly and are now found at nine locations around the city.

Now full disclosure: they have a map on their site and I peeked ahead of time. Don’t tell Urban Girl. She thinks she found them all coincidentally as we walked in “random” directions. I handed her a camera, described what we were looking for and we went about our search.

There are so many good things about this effort by the Knoxville History Project, that it’s hard to know where to start. They take an unfortunate and ugly reality – traffic engineering boxes – and transform them to something beautiful or interesting, or both. They teach us the history of the city and of its art and artists. They promote the Knoxville Museum of Art where most of the works shown may be found. And they beat screen-time as a way to pass a lovely day in the city.

Throwing in a camera added another twist. Urban Girl practiced her shooting skills, though not exclusively on our target. When she shouted, “Squirrel!,” she wasn’t imitating someone who struggles with attention issues, she was literally attempting to photograph squirrels – without irony. Of course she had to photograph “Rowing Man,” flowers, Ice Bear banners and other objects of interest along the way.

But I think she really took something away from the exercise about art and history. She got a kick, for example, after shooting the art wrap featuring Albert Milani sculpting his eagles, when she turned around and saw them atop the Supreme Court Building. We discussed abstract and impressionist art. She ultimately decided she liked the Charles Krutch work on Krutch Park even though she didn’t know what it was, at first. She also learned about marble and quarries.

After seeing the portrayal of a newsboy by Kermit Ewing, we had a conversation about how newspapers used to be hawked on the street in the middle of city traffic. I thought she’d react to the method of delivery, instead she asked, “Why should you have to pay for a newspaper?” I did not see that coming, but we talked about the people, materials and effort it takes to produce a paper. I’m not sure I convinced her.

We also talked about photography. She’s tired of using automatic settings and wants to learn how to manually operate the camera, so there’s hope on that front. She learned the word “elevation,” as we search for a high spot to take photographs of the eagles. Her perspective was different from mine and we talked about framing and perspective a bit.

There are currently nine art wraps scattered about the city and this interactive map gives you all you need to know. It makes a great outing for children, but why not for adults? It easy to load the map on your phone and take a walk through the city. You’ll likely notice something you hadn’t noticed before. You’ll learn about artists connected to the city and it might just make a great reason to walk over to the Knoxville Museum of Art to see some of the works up close and personal. Doesn’t that sound like a great spring outing?

More wraps are in the works in the very near future. At least a couple and maybe as many as four may appear within the next few weeks. With the new additions, other parts of downtown will be likely be included, making the exploration even more interesting. Consider taking a scavenger hunt to appreciate additional layers of history and culture in our city. Cameras and eight-year-olds are optional.