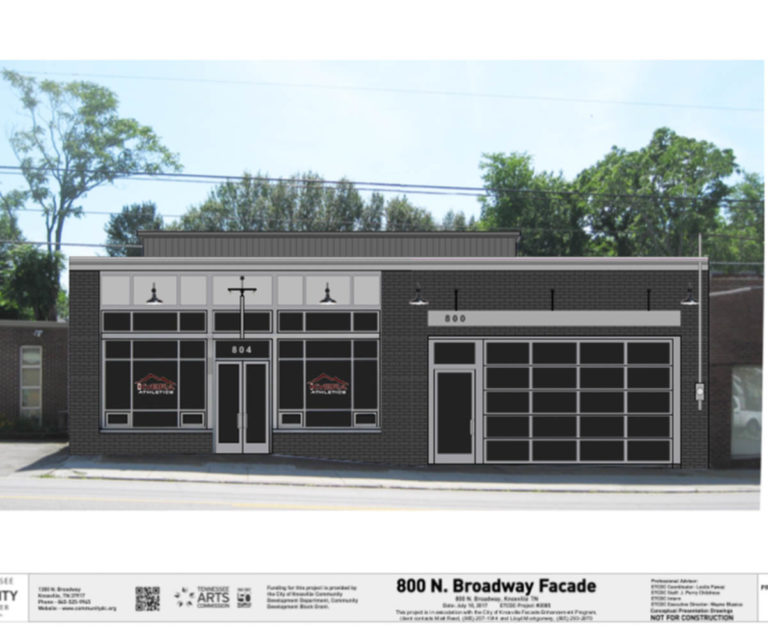 It was just over a year ago I introduced readers to KyBRa Athletics and owners David and Sue Finney. It’s been a very good year for the business which is located at 800 North Broadway, just between Elkmont Exchange (across the street) and Architectural Antics. The business is set to upgrade its facilities and double in size.

Since beginning their lease, the building has changed hands and the new owners secured a facade grant from the city, allowing major changes to the building’s exterior. Additionally, a major investment is being made on the inside, incorporating an additional 2,000 square feet for the public space of the business and about another 1200 square feet for upstairs office space.

Smee + Busby Architects and lead architect Chris King did the design for both the outside and the inside. Changes for the outside include bringing recessed portion of the front of the building in line with the most prominent part, resulting in the entire building fronting the sidewalk. A bay door will be installed on the new portion of the facade, allowing the new work out space to be open-air in good weather.

The aluminum on the portion of the building currently in use will be maintained and the new portion of the facade will also use the material. The external brick, which has multiple layers of paint, will be re-painted to fit the new color-scheme. They hope to maintain the small section of stained glass at the top of the current front of the building.

Like many older buildings, this one has been adapted over the years. The front portion appears to be just over 100 years old, while the rear portion is likely around 70 years old. The interior ceilings on each side will be stripped to reveal the beams as has been done on the side currently under construction, making for higher and more attractive ceilings. Equipment will be doubled and a turf surface will be added to one side and sleds will be purchased.

Showers are being added in order to provide clients the option of a lunch-time work out or an easier early morning transition to work. David says a number of clients arrive around 5:30 AM to complete their daily workouts. Many of these clients arrive by foot and, in fact, he said much of the clientele has come from the neighboring areas of Fourth and Gill and Old North, while downtown workers also have been a key group – generally arriving after work hours.

As the business has matured, the two primary focuses of service have become personal training and group training or classes. Nine classes run during the work week and another on Saturday. Some clients workout on their own, with keys to access the facility when it works for them, using plans designed by David and Sue. The new space will also allow for a physical therapist to have an office and use the facilities, and a massage therapist may also join the lineup.

While some clients are elite athletes, David emphasized that people of all ability and fitness levels are welcome and they’ll meet you where you are to get started. The only requirement is that people be ready to work hard and be pushed. The clientele also includes triathletes, distance runners, mountain bikers – and even one person currently training to become a member of special operations for the Marines.

The current space has worked well enough, that David says they could have continued that, but they wanted to see how it could do with more space, particularly given all the development going on all around them. The increased space will also allow for larger classes and they hope to expand their, so far, limited lineup of seminars on nutrition and other topics.

The business currently employees two people in addition to the owners; Julie and Tony (who is a PhD student in Exercise Science). The four of them, David said, Allows them to “pay attention to people, follow up and support them. People know us and know our children,” making for a more personal connection than to a typical gym. David says he’s learned more in this year than he ever learned in school – and apparently the lessons have been compelling enough to expand and take his learning to a new level.