Exploring One of Gay Street’s Most Beautiful and Interesting Buildings: The Mechanics Bank and Trust Building 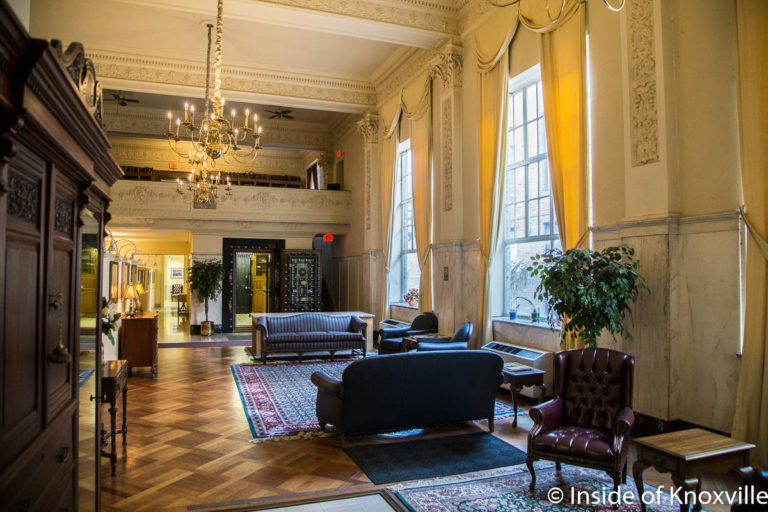 If you’ve slowed down a bit to consider the various buildings lining Gay Street, you’ve no doubt noticed 612 South Gay. The inscription on the front gives its name: The Mechanics Bank and Trust Building. Even that is an interesting point: Not all buildings have their names inscribed on the front, but they virtually all have names, formal, informal or both. Generally the name references the original use of the building, an important period in its history or its current occupants or owners.

Beyond its name, the facade is one of the most striking along the street. Originally built in 1907 as a three-story building, it was later expanded by two floors in 1923. The facade is one of several marble facades along a street where the general expectation is brick.

The locally quarried marble is fashioned in the “Second Renaissance Revival,” style (which is Italian for ornate and pretty). It’s interesting to study the front of the building and imagine it without the top two floors. It would be attractive, but nearly as stunning. In 1983 the building was added to the National Register of Historic Places.

Originally a bank, as you might suspect, it has been a bank for much of its history. In succession after the Mechanics Bank and Trust, it became Union Bank, Hamilton Bank and, finally, City and County Bank before the collapse of the Butcher empire.

That said, it has also hosted a number of other businesses including WROL, an early Knoxville radio station which featured Cas Walker as one of its hosts and included the Everly Brothers (in their first radio appearances) among its performers. The station later evolved into WATE television which had studios in the building. In the 1930s the building listed a number of lawyers among its tenants, as well as the Great Smoky Mountains Park Commission and the Knoxville Chamber of Commerce. The building can be spotted as an extra in the movie, “October Skies,” from the book Rocket Boys.

The strongest historical connection to the spot actually rests with the story which happened just outside its doors and was forever immortalized by Mark Twain in his book, Life on the Mississippi. In October 1882, a time when the Mechanics National Bank occupied the address in an older building, the bank president, Thomas O’Connor, was shot and killed by Joseph Mabry in a shoot out that also left Mabry and his son dead in the street.

In recent years the building has been home to two law offices and the Revenue Recovery Corporation. The call center collection agency left downtown in 2012 citing a lack of parking. At the time it seemed like a setback to downtown in some respects. They occupied floors two through four, while law offices occupied the other floors. The top floor is owned by Wanda Sobieski and is home to Sobieski, Messer and Elledge. That beautiful floor has its own amazing story, which I wrote in 2014. You can read here.

The ground floor is home to the law offices of married couple Doug Toppenberg and Elaine Burke. Toppenberg bought the floor in 1994 when all of downtown was a very different place. That floor, as you can see from the photographs is one of the most beautiful spaces in downtown. The former bank lobby, it features massively high ceilings, chandeliers, elaborate decorative columns and a striking mezzanine.

The former home of Revenue Recovery Corporation has remained empty. Offered for auction in 2013, the sellers did not get what they felt was an acceptable offer. At the end of 2014, Toppenberg and Burke purchased the vacant floors – two through four with the idea of turning each floor into single, very large condos built to the specifications of buyers.

Each of the middle three floors include about 3,650 square feet and feature full-span concrete beams, allowing for the entire floor to remain open. The floors feature large windows with various views including the Arcade and Tombras Buildings to the south. Each of the middle floors would require installation of infrastructure to become homes, but the building is zoned mixed use, so they could also be offices.

Toppenberg and Burke have decided the time has come for them to move on and they are offering the first four floors – including their offices, the former bank lobby, for purchase. The floors, including the mezzanine, include 16,300 square feet of space, and they are marketing the property for $2.5 million. Interested? Melinda Grimac with Alliance Sotheby’s is marketing the property.

As the supply of not-completely-developed historic downtown buildings shrinks, there will be fewer listings like this one possible. In coming days I’ll highlight other unique buildings available for purchase with their own significance and backstories. Stay tuned.