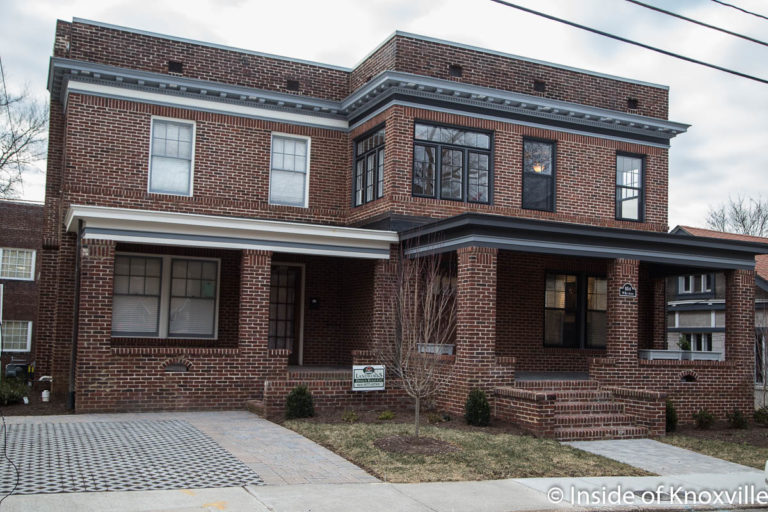 A thin thread connects yesterday’s article about the Mechanics Bank and Trust Building and today’s article about a renovated home in the Maplehurst section of downtown. As it happens, when the bank president, Thomas O’Connor was gunned down in the street outside the bank, the bank’s vice-president, Edward J. Sanford, briefly assumed duties as head of the bank.

Not only was Mr. Sanford the bank’s vice-president, he was one of the founders of the bank and a manufacturing tycoon. He maintained a mansion in an area near downtown. The long-lost mansion was called, “Maplehurst,” and the little residential enclave between Church Street United Methodist, Henley Street, the University of Tennessee and Neyland Drive is named for that missing mansion.

I asked long-term resident and beloved local artist Cynthia Markert for a few thoughts about the little section of downtown. She said, “I could write a book.” It was to Maplehurst that she returned after eight years away from east Tennessee living in Washington, D.C. “It was very eclectic- just the right creative sorts drawn to the beautiful varied architecture and cheap rent.”

She remembers everyone moving all around the place, Judge Swann’s mother being her landlady. When she lost her studio space in the Victorians on eleventh street, she moved into a larger space and has created most of her life’s work there.  While the spirit of the place has changed, she’ll always remember the bohemian spirit of the times when friends would sit out all night. Now she says the, “spirit is still there in the architecture and the huge magnolia tree I used to sit under at 3 am after a night of dancing across Henley at Lord Lindsey’s!”

As the neighborhood evolves, one side of a beautiful duplex at 804 Hill, has been completely beautifully returned to its original glory, but with all modern conveniences. Built in 1920, the home has seen all the changes detailed by Cynthia. The duplex (one half has been renovated, with the other to follow) was inhabited for many years by college students, but remained remarkably intact with little damage sustained in the intervening years.

Originally listed as one address, 802, the deed was subdivided in December 2016 by developers Buzz Goss and Dale Smith. The two had to separate sewer, gas and electric to the two units of the home Buzz bought in 2010. Students continued inhabiting it through the 2017 academic year. The number of beer cans thrown into the crawl space in the basement, I am told was staggering.

When they began the renovation, they learned the home was in reasonably good condition. Virtually all the doors and windows throughout the house are original and are in working order as is a very special accordion/French door into the kitchen off the main hallway. Nothing had been updated in decades, which, in preservation terms, is a very good thing. The kitchen had to be completely modernized, of course, and it had likely been the same for fifty or more years.

All but one window in the house is original, but in order to improve efficiency, storm windows were artfully added to the exterior of each one, which also served the purpose of protecting the original glass into the future. The only interior doors not original to the house are the three in the master, which are replicas of those found throughout the rest of the home. The floors are also all original.

The layout of the home was maintained, but some of the rooms were re-purposed. The current kitchen, for example, was originally a dining room. Given that fact, one of the startling assets of the house is the large size of the rooms generally and, particularly, the bedrooms. The home includes a master bedroom on the ground floor and three bedrooms upstairs, with one bath upstairs and one-and-a-half downstairs. The front living space features a working gas fireplace.

The old kitchen was in what is now the master bedroom. It also has a door onto the back deck which is bordered by a private parking space that has been added. The deck will have wrought iron railing when completed. A complimentary second-floor deck which had been added to the home over the years, was removed. The home also offers a great front porch that looks out to Church Street United Methodist Church.

At 3152 square feet, the home is one of the largest spaces available for a single family in the downtown area. A 625 square foot basement is also included and could serve a number of functions. Every system – plumbing, electric, HVAC and fixture is new, as is the roof. Dixie Kitchen provided the high-end finishes for the bathrooms and kitchen and helped design the kitchen layout.

The upstairs sitting area was one of my favorite spots in the house. It could (and would if I lived there!) be an office, with windows on two sides and a view of the church and the Sunsphere. There are twenty-six windows in the home and every room has multiple windows. Another appeal is the location, which is directly in the middle of UT, the river, the World’s Fair Park and downtown.

To say that the property is unique to downtown is an understatement: a hundred-year-old, residence with over 3,000 square feet in a central location is something you can spot many places downtown. Very few homes downtown were originally built as homes at all. It’s also rare to find a downtown home with no HOA fees and one in a residential neighborhood. The sale price has been set at $1.25 million.