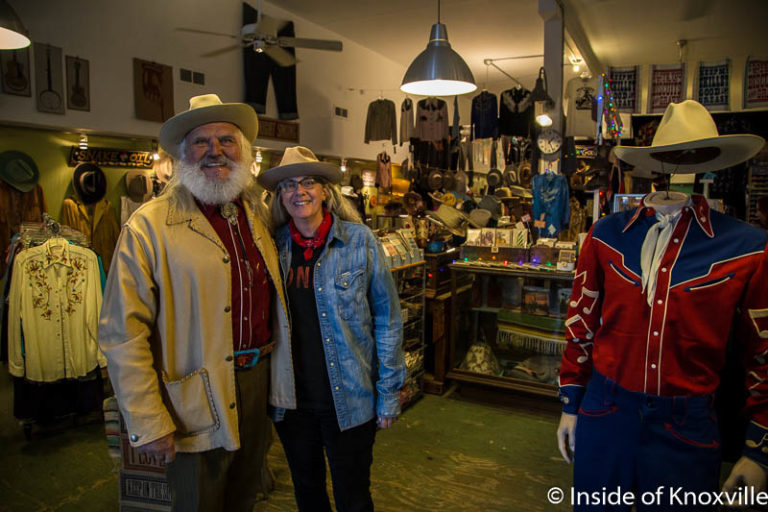 Julie Belcher moved to Knoxville in 1982 with the intention of becoming an architect. While at UT she switched directions to study graphic design. She interned at and worked for five years at Whittle Communications, a place she describes as, “the most wonderful, creative environment I ever worked.”

I’m talking in the upstairs art studio at Pioneer House amidst a kind of barely controlled chaos, with both Julie, owner of Pioneer House, and Peg Hambright, owner of Magpies and a part of the upcoming art show. Peg interjects that she doesn’t, “think we would be Knoxville if Whittle hadn’t happened.” She pointed out that when Julie was working at Whittle, she was working at Tomato Head and, “Whittle employees were the only ones brave enough to start eating there.”

Julie moved away for about ten years. She lived in New York City and got an MFA from the School of Visual Arts in Interface Design. She worked at Seventeen Magazine for a year and then worked for Blue Note Records designing covers for Japanese reissues of jazz recordings.

She returned to the area in 1996 and, along with Kevin Bradly, started Yee-Haw Industries, making letterpress based art. She says she, “wanted to return to making something with my hands.” After about two years operating out of her mothers back yard in Corbin, Kentucky,  Yee-Haw moved to 413 South Gay Street where she purchased the building which was in rough shape, requiring replacement of the plumbing and electrical systems.

In 2012, Kevin moved to California and she became sole owner of the business, the name of which she changed to Pioneer House as began exploring what she wanted it to be. She owns two letter presses and numerous letter sets she has collected over the years. Laura Baisden also operates her Camp Nevernice press out of the same building and also owns a letter press.

You’ll find the front of the shop filled, not only with her and Laura’s work, but also with vintage clothing and accessories. Part of the model of Pioneer House has been to expand retail and Julie says that is five times bigger now than it was five years ago. Phillip Rupp, AKA Cowboy Phil has a massive amount of vintage cowboy apparel, from boots and hats to shirts, jackets, pants and down to earrings and bolo ties.

The two met when she, “was selling letterpress prints in Contemporary Craft at New Orleans Jazz and Heritage Festival and Phil was employed with the fest . . . He worked at a shop called Sputnik Ranch in New Orleans as a fun Saturday gig and would dress in his fancy hillbilly Hollywood cowboy clothes. Folks would jump when he moved not realizing he was not a mannequin.”

He says the business is good, with some sales coming at festivals, but also coming at the shop as bands pass through. His merchandise is quite well known and, in addition to selling to local artists like Cruze Contreras and the Barstool Romeos, he’s also been sought out by Marty Stuart and others from the Grand Ole Opry to sell their old clothing. Customers at the shop have included, “Chris Stapleton, Sheryl Crow, Shovels and Rope and Kasey Musgraves, 311 among many others.”

Part of the impetus for the upcoming art show has been Julie’s restless desire to do something different She says she wants to, “elevate printmaking,” and to do that she’s, “exploring hand-inked,” works as well as cutting and re-sewing to make new print forms.

She’s also working on a process called encaustic which involves use of wax-based paint (which includes beeswax, pigment and resin). It’s complex, utilizing skills including wood-cutting, traditional painting, reshaping with heat and more. As a final touch, Peg is hand rubbing pigment into cuts she makes into the wood. Julie and Peg have begun to collaborate on pieces using the strengths that each bring to the process and following a general theme of southern expression – which includes a lot of food – a topic closely tied to Peg’s career.

Peg grew up in south Knoxville and says she wanted to get as far away as she could – and that initially meant Franklin, Tennessee where she attended art school before dropping out and returning to UT to study graphic design and illustration. Then she became a member of one of Knoxville’s most celebrated bands, the Judybats. They were signed, went on the road and that was the end of school.

After deciding to leave the band and return to Knoxville, she explored resuming her degree but realized that computers had replaced everything she learned and it would be like starting over. She knew she couldn’t sit at a computer all day, so she got a job at Tomato Head while considering her next move. She knew she wanted to start a business, but couldn’t decide if she wanted a burrito stand or a furniture business.

She took a wood joinery class and decided it was too precise for her skills and taste. She’d begun making desserts for Java, which was then under a previous owner and in 1992 formed Magpies which she operated initially out of her mother’s home. Eventually she shared a kitchen space with Hollis Church of Dega Catering.

After working for a time out of Mahasti’s kitchen in Tomato Head, she built a commercial kitchen in 1996, eventually opening a storefront in 2002 in the Old City. In 2008 Magpies moved to its current location at 846 North Central in 2008. She says she’s continued to work with her music and her art off-and-on, but she’s recently been spending more time with her art.

I also chatted briefly with Laura, whose prints are displayed along one wall in the rear of the storefront, and with Cara Pfennigwerth, a mixed media artist who will contribute crocheted works, which reflect her inspiration from the flor and fauna of east Tennessee. Laura has produced art for many major artists and recently produced a print for the Badland’s National Park as the National Park Service has selected an artist to produce a work for each park. She’s proud hers is the only letter press work.

These four artists will be joined by Knoxville native and potter, Amanda Humphreys whose,”work is inspired by her love of textures and colors borrowed from old, historic buildings, vintage maps and the 80s and 90s.” The five will mount the Knoxville Girls! exhibition at 413 S. Gay Street with an opening this Friday, November 3 from 5:00 PM to 9:00 PM to coincide with First Friday. The show will run to Saturday, December 23.

Regular shop hours are 12:30 PM – 6:00 PM Wednesday-Thursday and 1:00 PM to 7:00 PM and Friday-Saturday. You may also shop anytime via pioneerhouse.etsy.com or pioneer-house.com. If you’ve never checked it out, look for a chance to do so. It’s a fun shop with an eclectic mix that will surprise you.