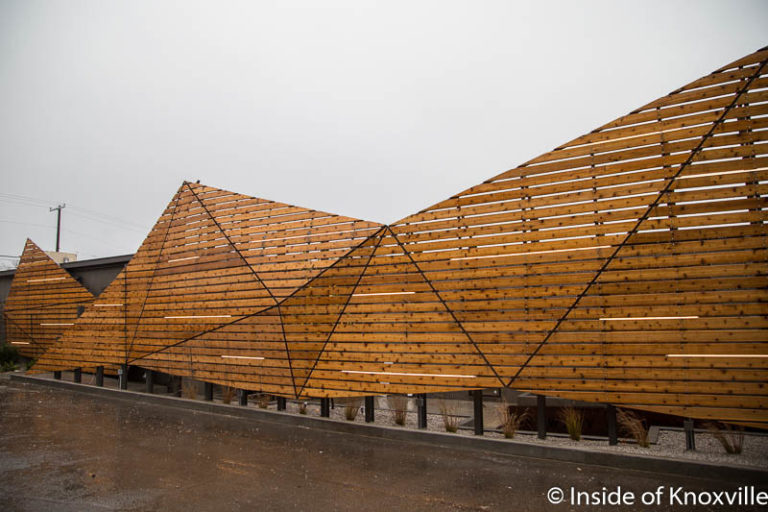 Elkmont Exchange, which I introduced here last March, will open to the public Monday, November 6 after a weekend of friends and family events. Executive Chef Ryan Davenport and Brewmaster Alex Violette, native Knoxvillians and previous owner/operators of of Pasteur Street in Vietnam have expanded their team to include Chris Meadows, former Lead Brewer at Atlanta’s SweetWater Brewing Company.

Also on the team, Jon Newman, acclaimed charcuterie maker at Flyte in Nashville, will assist Ryan Davenport in the kitchen as Sous Chef and J.T. Dewitt, nationally accomplished restaurateur, most recently with Babalu, will assume the role of General Manager. Finishing the management team, Johnny Miller, well known and respected in craft beer community, has joined as Assistant General Manager.

From the geometrically interesting exterior along the front and side of the restaurant to the many interesting features found throughout, much of what you’ll find has been produced by well-known Knoxville artisans. That fascinating facade, as well as the door handles were fashioned by Kelly Brown of Bower Bird.

You’ll also find a bar like none other in the city. Brett Honeycutt, who is responsible for the build-outs at many of the craft breweries around town, including many of the beautiful bars you enjoy, has gone beyond anything found locally, with a “river” carved into the thick wood of the bar. That cut-out has been filled with river rocks and the cut out and bar top – as well as the hostess counter – has been given a thick, transparent coating highlighting the wood grains, river and stones. It’s worth the trip just to see it.

A starting menu is pictured here (click to expand to reading size!) and it will, no doubt, evolve. Reflecting Chef Ryan Davenport’s fine-dining background, he, “has designed the Elkmont Exchange menu to fit the core values of the brand and encourage a sense of adventure.” Both lunch and dinner will be served from the outset and dishes have been constructed with beer pairings in mind. The restaurant will offer a brunch menu later this year.

Featured items, known as “The Exchange,” will highlight Davenport’s fine dining background and will regularly rotate dependent upon the availability of ingredients. Davenport draws his culinary inspiration from the outdoors as well as his worldwide travels. His time spent in Charleston, Nashville and Vietnam are reflected in the menu with items such as Boudin Balls, Hot Chicken, and Vietnamese Pho.

The kitchen will also feature an expansive charcuterie program, with house-cured meats and house-made sausages on display in a curing room visible from the restaurant lounge area. There will also be a variety of plant-based options available for vegan and vegetarian guests. Davenport’s passion lies with the skill set and attention to detail that is seen in fine dining establishments; however, he also believes that the same level of quality can be enjoyed in a more casual atmosphere.

The brewing side of the equation is equally as important, of course, and customers will be able to view the brewing area, equipment and barrels. Alex Violette worked in partnership with Brewmation to, “design and develop a custom, state-of-the-art brewing, brewhouse that gives Elkmont Exchange the capability for automation and fine tuning that is typically only utilized in much larger breweries. This system also functions with higher efficiency than most, due to its mash filter which allows their brewers to make beer with about 15% less barley and up to 30% less water.”

From the outset six styles of beer will be available to customers, with more styles coming this winter. While you’ll find your traditional styles, you’ll also find experimental beers as time passes, “many of which will feature regional fruits, herbs, and spices.” You’ll find growlers for carry out from the outset and cans will be available soon. Current plans only include brewing for inhouse sales. Initial styles available include Light Lager, IPA, Pale Ale and Brown Ale. “Violette and Meadows also collaborated with Balter Beerworks and Abridged Brewing Company for limited release beers to celebrate the newest addition to the Knoxville craft beer community.”

Plans for the brew side of the business also include, “creating an extensive barrel aging program on a scale that Knoxville has never before seen . . . Along with standard whiskey and wine barrels, Elkmont Exchange will also utilize two 43 barrel (1,333 gallon) French Oak foeders to age certain beers for anywhere from one to eighteen months.”

It’s an exciting new opening both for craft beer enthusiasts, as well as Knoxville’s growing foodie community. The restaurant also joins a number of other businesses announced or opened for what is becoming a vibrant area of the city. Hours of operation will run from 11:00 AM to 11:00 PM, seven days a week. You can find them on Facebook and on their webpage, as well as Instagram and Twitter. Walk-ins are fine, but reservations are accepted and should be available through the Nowait app, soon.

“Inspired by the outdoors, Elkmont Exchange encourages guests to come together as a community, celebrate East Tennessee, and join in on their passions. They believe beer, food, and experience belong together.”