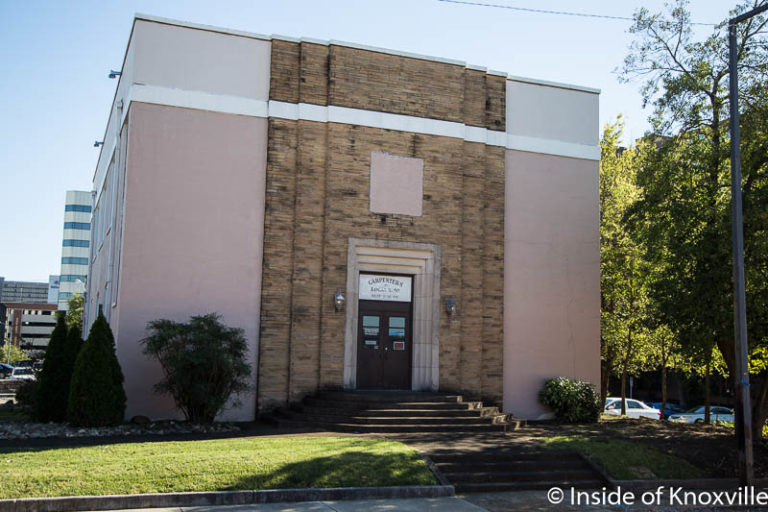 Sometimes a word or a phrase just stands on its own to incite or to evoke a reaction or a mood without further assistance. Gallows Hill. The reader immediately knows what happened there. The Knoxville reader may not readily know that the name references what we now generally call “Summit Hill.” “Summit” has such a nice, if generic, ring to it.

I stopped in on Jack Neely who told me that “Gallows Hill,” was simply a matter-of-fact name our predecessors a hundred-sixty-years ago would have used to designate the spot where Knoxville’s wayward citizens were removed from this world. Once considered far enough out of town to be decent for a civilized execution, it is located on the hill near Immaculate Conception Catholic Cathedral and when the name was changed to “Summit,” some locals derided the new name as a sort of silly modern softening.

Not many people today would know the building referenced as the “Carpenters’ Union Building,” though the name describes the function and evokes an era in American history when unions held great power. It sits atop what was once “Gallow’s Hall,” and may seem unremarkable to a passerby, should anyone pass by the building which originally faced Vine Avenue at its crest.

Built in 1946 as a Union Hall, with the requisite offices and a pretty spectacular (for the time) entertainment venue sitting on its top floor, the building would have been a point of pride for carpenters of the time. Now the few pedestrians climbing the hill give it scarcely a glance, though it contains some important businesses such as the offices of Adrienne Webster Accounting, Skyline Exhibitor Source, Nourish Knoxville and, most importantly for this story, the Knoxville History Project.

It was in the offices at the Knoxville History Project that I met with Jack Neely and Paul James who keep the flame of our local history alive through the non-profit located there. “Jack Neely,” is a name powerful enough for many of us to be shorthand for, “Knoxville history.” For decades, now, many of us have learned who we were, and are, as a city through his writings, which continue to be regularly published on the Knoxville History Center website. As I entered he was about that life work, focusing most recently on a history of local public works, the Old City and more.

It only took a small interruption in that work to prompt Jack to conjure images of a “small rocky crag overlooking a swampy area,” with ne’er-do-wells dangling in the Knoxville air at the end of their poorly-lived time on earth – and a small run of rope. As only someone so deeply versed in local history might do, he easily traced decades and shifting sensibilities to a later era of Union Halls, softly landing on an country music photograph hanging on the wall from the 1960s as he identified the young versions of many stars of that and a later era.

This was my little experience as I dropped by the Carpenter’s Union Building, but much more is in store for you if you drop by next week, on October 26, for Tales and Tamales at Gallows Hill. The name tells much of the story – you’ll be regaled with tales from Jack Neely about all of the above in the very spot where those souls dangled for their misdeeds. You’ll also enjoy tamales (which prompt Jack into another story – just ask) from Good Golly Tamale.

While tamales and hanging out with Jack would be enough to make most anyone happy for an evening, there is much more to be had. Kukuly and the Gypsy Fuego will be on hand to provide music from the era of the building’s construction and they’ll play on the cool stage in the original ballroom – in which you’ll also find a handy bar. Dessert will be provided by Magpies Bakery.

Laura Still of Knoxville Walking Tours will be on hand to take participants on her Shadow Side Ghost Tour and you’ll get an autographed copy of her book A Haunted History of Knoxville. A portion of proceeds from several of Laura’s tours is donated to the Knoxville History Project, but you get this one for the price of your admission. You’ll want to take her other tours as soon as you can catch one.

The cost of the evening is $100 (tickets here) which gets you a gander at the Carpenters’ Union Building, hanging out with Jack Neely, dinner and dessert, music, a downtown tour and an autographed book. It’s about as good as you might hope to do for your money at one of these events. Proceeds, of course, go to support the important work being done by Jack Neely and Paul James at the Knoxville History Project. I can’t imagine much related to our city that would be more important for you to support.

You can also catch Jack at Maple Hall tomorrow (Thursday, October 19) night at Maple Hall. It just happens to be the 135th anniversary of Knoxville’s most famous Gay Street shootout and he’ll have the whole story.