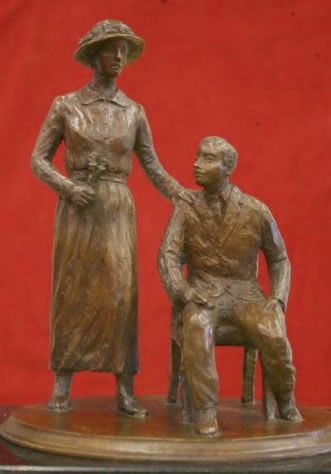 It’s interesting to ponder Knoxville’s stock of statues and memorials in the wake of recent controversies in other southern cities. It doesn’t take much of a survey to realize we’ve chosen quite a different path from those chosen by our sister cities. Though we have far fewer statues than some of the other cities, it’s startling how diverse and forward thinking our little collection is becoming.

Consider: Statues near and in downtown include an African American author (Alex Haley), a Russian musician (Sergei Rachmaninoff), an east Tennesseean who helped eradicate polio (William Sergeant), a Cherokee woman (Beloved Woman of Justice), a group of native Americans (Treaty of the Holston) and a woman who embodies strength in so many ways (Pat Summit). It’s not a bad group.

The two most iconic statues in the immediate downtown area, at least in terms of sheer volume of photographs taken by tourists and locals include The Oarsman (whose meaning may depend on your perspective – is he sinking or rising?) and the Tennessee Woman Suffrage Memorial. Each of them have a constant stream of ready admirers on any given day.

I met with Wanda Sobieski, director of the Suffrage Coalition who said the she started work on the Suffrage Memorial in 1975. It was finally a reality when it was unveiled on Equality Day, August 26, 2006. She related the arguments against suffrage that she found in her research, including the idea that passage would destroy the family, that women would not get married and, if they did, would leave men at home to raise the children.

The same group would like to add another sculpture to the mix: a statue to Febb and Harry Burn. To understand who they are, why they matter and why east Tennessee played such a pivotal role in women’s right to vote, you have to go back a bit. Here’s how the group explains the story:

The first public call for women to vote came in 1848 in Seneca Falls, New York. Not only unable to vote, women at that time had no right to their children (husbands could give them away), married women could not own property, they had no right to their own wages, and were generally, as far as the law was concerned, invisible.

After the Seneca Falls convention, decades of ceaseless effort went largely unrewarded until Congress finally passed the Susan B. Anthony Amendment in 1919. Ratification by thirty-six states was required to make it law. By the summer of 1920, thirty-five states had ratified, but unexpected losses in northern states made its future uncertain. The south was said to be “solidly anti-suffrage.”

In August of 1920 in a tumultuous special session of the legislature, Tennessee took up the question. Tempers flared and pressure from outsiders was almost unbearable. But in the end a twenty-four year old legislator from East Tennessee, Harry Burn, surprised the world with a last minute switch of his vote from “anti” to in favor of ratification. That set off a firestorm. The deciding factor for Harry Burn was a letter from his mother, Febb Burn, who urged him to be a “good boy” and vote for suffrage.

The story is actually quite dramatic. Only days were left in the effort to get the amendment ratified. Tennessee was the last chance for women to get the right to vote. Hopes were not high. On the day of the vote, the legislature was deadlocked until Harry changed his vote. Here’s more detail from the coalition:

Tennessee provided the final approval of the federal Constitutional Amendment that gave millions of women the right to vote. Ending a 72 year battle for the most fundamental right of democracy, Tennessee, a southern state, against all odds, did the right thing.

The ultimate outcome of the highly controversial matter rested on the shoulders of the youngest member of the legislature, twenty-four year old Harry Burn from East Tennessee. He instinctively understood the fairness of allowing all citizens to vote, but he had decided that if the amendment appeared to be failing, he would vote against it to please his constituency. If the amendment appeared to be winning, he would vote for suffrage. Faced with a tie vote he switched sides and broke the tie, thereby making woman suffrage a reality, and infuriating his colleagues.

When called before the House Chamber to answer for his vote, he explained, as he pulled a handwritten letter from his mother out of his coat pocket, that his mother had urged him to do the right thing, vote for suffrage. That letter, to him, was justification enough.

This amazing story about a young man, his mother, and a simple, honest letter deserves a special place in Knoxville, East Tennessee’s capital.

An appropriate memorial to Harry Burn and his mother, Febb Burn, will ensure that this story is not lost and serve as an inspiration to those who must make difficult decisions under the glare of strongly held opposing opinions.

Ms. Sobieski, a walking encyclopedia of information about the movement and its history, said that Harry had to escape the chamber after casting his vote and the national guard had to be called in. He hid for hours and ultimately had to defend his vote before the chamber. The vote did not end the matter, however, as a judge was set to order the papers certifying the vote to be prevented from being sent to Washington as required. A group of women delivered the papers there and had them certified before he could make his move. It’s a story the group feels should be remembered and feel it is appropriately placed in Knoxville given the east Tennessee roots of the family. They’ve engaged sculptor Alan LeQuire, best known for his sculptures of Athena and Musica in Nashville. As you can see from the photos provided by the Suffrage Coalition, he’s begun the work. The city has agreed to allow placement of the work at the southeastern corner of Clinch and Market, next to the East Tennessee History Center. It will help continue a developing corridor of sorts of history sculptures running from Market Square through the courthouse lawn.

Money is being raised through tax deductible contributions and the group is about halfway to the goal of $400,000. Those donating, as you can see by the form replicated here, may have their name placed on one of 1500 bricks surrounding the statue with a donation of $100. A donation of $1000 to $5000 provides the chance to have one’s name engraved on the base of the statue. Miniatures of the statue are available for a $5000 contribution.

Support the group by “liking” their Facebook Page. If you’d like to give a donation you may do so by completing the above form (also found here). You can also make an online donation to the coalition here by selecting the Suffrage Coalition Fund from the drop-down menu. There is also a “donate” button on the Facebook Page.