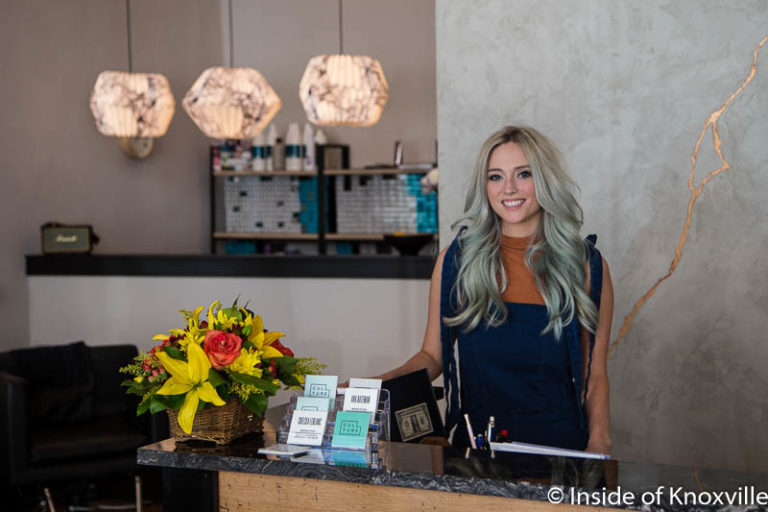 Liv Halcomb, owner of Culture Hair Studio has deep downtown roots for a person so young. Born in Knoxville and raised in Karns, she spent a large part of her childhood in the Old City because of her father’s business, Moss Creek, still located on Jackson. Childhood memories include running to the corner to get sodas and standing across from the pay phone on Central, calling it with a cell phone as people passed and watching to see if they would answer. She’s grown up a little since then.

Always having enjoyed art and the creative process, but realizing that being an artist might not be the most stable financial route for her to take, when she graduated early from high school, she felt uncertain which direction to pursue. After a summer in Hawaii soul-searching, she returned determined to channel her creativity into the beauty industry. She enrolled in the Tennessee School of Beauty from which she ultimately graduated.

She felt it allowed her to be creative while working one-on-one with people – another thing she enjoyed. She said, “It is so rewarding to work with someone and to see them walk out with a new confidence. She worked for Salon Visage, both out west and when it was on Market Square. For the last six years she’s worked at Lox Salon in the heart of the Old City and she said leaving there was bittersweet – she learned so much there – but it was time.

She dreamed of opening her own business almost from the beginning, but she says it was only the last couple of years she began to seriously consider what it would take to make that dream happen. She never considered opening a salon outside of downtown. Her parents live downtown, her fiance (they get married in March) works downtown and her roots were too deep. She also says she thinks downtown offers a different kind of clientele and it’s one that she enjoys.

When she found the spaces at 113 and 115 Gay Street and learned from the Courtland Group that the two spaces could be combined, she knew she’d found her next step. She’s excited about the synergy of being located between Meadowsweet Massage and Wellness and Bat N Rouge Beauty and hopes the three which offer related services might be able to cross-promote. Her father drew the plans to her specifications (that’s what he does with his business) and the Courtland Group built out the beautiful space.

What you’ll find inside includes a number of amenities designed to make the experience a pleasant respite from the city streets. Soft seating is provided in a waiting area with wide views of the block. Patrons are offered their choice of beverage – coffee, tea, soda, cucumber water – and wine or beer. The business has two taps of local craft beer. Art and plants help soften the space, particularly the shampoo area which is designed to be a pleasant space of its own.

You’ll be taken care of by Liv or one of her two initial stylists; Ana Bateman and Chelsea Leblanc. The staff may grow with the business, but they have opened with a full complement of services including men’s and women’s cuts, color, extensions, Keratin treatments and facial waxing. Liv says the studio is inspired by studios she has seen in her travels to larger cities such as Chicago and New York City.

She says she wants her stylists to feel free to be as creative and inspired as possible every day they come to work. She wants her clients to feel relaxed, refreshed and she wants them to leave with increased confidence. She plans to have the entire team travel together in a quest for new technique and inspiration.

The salon offers a full range of beauty products from Evo, an Australian company. It was important to her the products be environmentally friendly and not tested on animals. All their containers are also made from recycled products. She also carries Knoxville-based Anchors Aweigh Hair Company products by local resident Ben Miller whose line provides pomades, beard oils, shampoo and conditioner.

The salon is open for business Monday through Saturday, 10:00 AM to 7:00 PM, though hours might vary depending on stylists commitments. You can drop in to make an appointment, call 865-622-7677, or make an appointment directly online (here). Check out their webpage, follow them on Instagram and be sure to visit their Facebook page and give them that ever-important “like.”