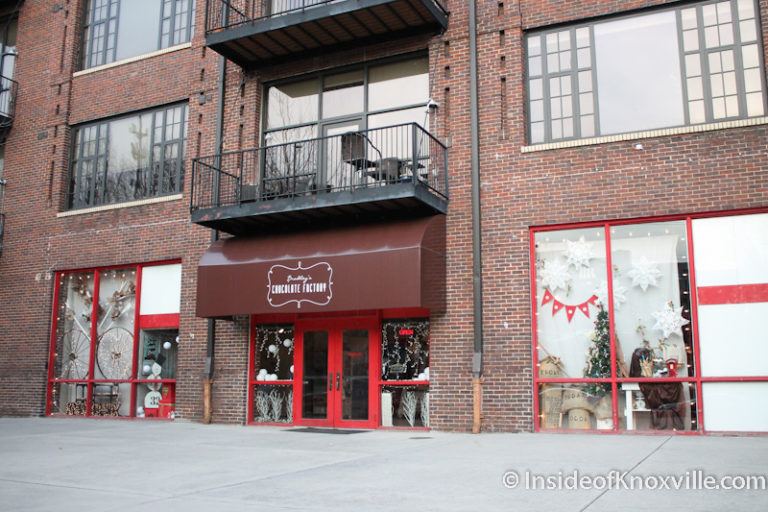 Bradley's Chocolate Factory, Knoxville, January 2014
A Market Square location has been a dream of Brad Hamlett’s for a long time. It will be true this December when the Knoxville Chocolate Company moves to 29 Market Square.

Originally from Knoxville, he began making chocolate when he was a teenager, working for a chocolate shop in Florida for six years before returning to Knoxville. Once here, he opened a chocolate shop with his father on September 7, 1995, eventually moving it and doubling its size. It was there that he met Joy, who later became his wife. She worked in a gift shop next door and brought that idea into the chocolate store and it went so well, they moved to a new place, doubling the size once more.

He told me then that he really wanted a location in the heart of downtown. As of this November, that dream comes true when the Knoxville Chocolate Factory will take possession of 29 Market Square, assuming the location now inhabited by Tori Mason Shoes, which will join Bliss at their new Gay Street Location. He looked at spots around the center city, but he said people’s reaction when he mentioned the possibility of being Market Square confirmed that he really wanted that spot.

The scope of operations will be different at 29 Market Square. He won’t have as much space for manufacturing as is the case in the location in the Candy Factory, but  he will be able to do some of the chocolate making there which will allow customers to enjoy watching the process. The bulk of manufacturing will be executed at the west location.

The retail area at 29 Market Square will be about the same as the current location, but he says it will be better for them in that a large part of their current retail space gets afternoon sun – which isn’t so good for chocolate. In the new space they’ll be able to display chocolate throughout and have more room for gifts and gift baskets which are a big part of their business. They also plan to feature more local art and crafts by local artisans.

He’s also excited that the anticipated increased volume will allow more chocolate-covered fresh fruits year-round. You’ll be able to get chocolate covered strawberries every day. He also hopes to do more experimental chocolate over time and to develop a new line of caramels.

The customer base on the World’s Fair Park consisted of a lot of out-of-town visitors, including people in town for events at the convention center as well as those who found their way to the Sunsphere and the World’s Fair Park. He expects to continue to draw many of those, but he also hopes to add customers who live or work downtown who might like to pick up a little something for themselves or as a gift on a more or less regular basis. Whereas the World’s Fair location felt like a destination, the new address, he feels, will provide a ready flow of people who are out enjoying themselves and ready to shop and eat.

More good news regarding the new space is that very little has to be done to have it ready to open. They’ve have to do some plumbing, but have basement access, so that shouldn’t be hard. They won’t have to install a hood or a grease trap for what they plan to do. They’ll install a bit of equipment and make the space attractive and be ready to go.

As a bonus, the architect will be Smee+Busby Architects who just happen to share the same 29 Market Square address, with offices located upstairs. That should make getting in touch with the architects a pretty easy matter. Brad said he is particularly excited to use the group because Gregor Smee designed his very first shop in Knoxville.

In the end, he says, he just, “feels like this is right.” He says it wasn’t his time before, but now, “I’ve learned so much and made so many mistakes,” that he feels he finally is ready for a spot on Knoxville’s biggest stage. They are offering the space in the Candy Factory for sale and they hope to be serving up chocolate on Market Square by the beginning of December.