Saw Works Brewing Company: A Story of Promise and of Promises Broken (Part Two of Two) 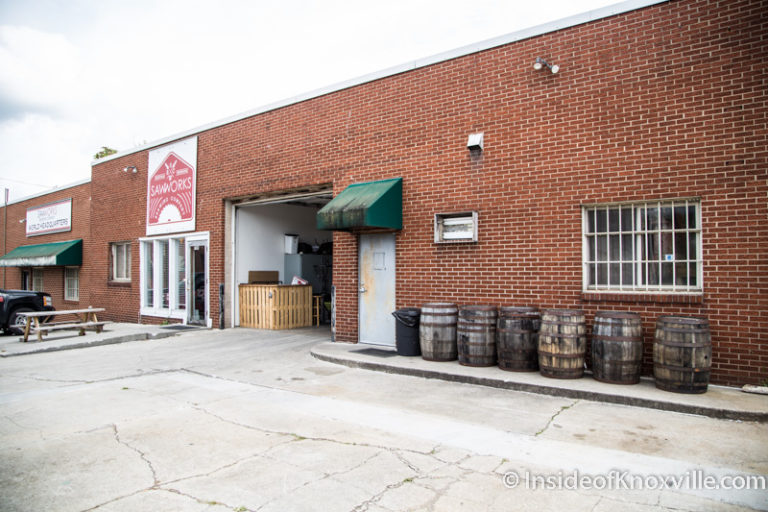 (The first part of this article ran yesterday.)

As 2016 began, Saw Works had suffered considerable damage to its reputation with local vendors, suppliers and points of sale. It only grew worse as the year continued.

I spoke to several people involved in sales who reported promising deliveries of product only to learn they would not be filled because the needed raw materials were not approved for purchase, leaving empty taps or shelf space. A former salesperson showed me charts indicating sales were increasing, but shipments were not from 2016 into 2017. The potential was there to earn more money, but the materials for brewing were not being purchased in sufficient quantity to meet demand.

One sales representative willing to go on record, Jamie Updegraff, worked for Saw Works from January 2016 to May of that year. She worked with all vendors including restaurants, bars and grocery stores. Her initial employment interview was with Adam Palmer and Brant Enderle.

She was charged with covering sixteen counties in east Tennessee and was told she would be reimbursed for use of her personal vehicle, but that another vehicle was, “in the works.” She was also promised bonuses if sales grew.

She said she quickly learned that the Saw Works reputation was much worse than she’d been led to believe. Bar and restaurant owners expressed disappointment with quality levels, saying the beer had changed. Bars complained because they did not get beer they were promised, while stock was being diverted to cans to stock grocery store shelves. Long-term customers felt cheated. She also learned that below-par cans were being pushed to the grocery stores even when brewers knew they were bad, but were forced to send them out.

She convinced the accounts, as she had been assured, that these problems were in the past. Two months later another outage occurred because of a lack of funds for ingredients. Outages were often followed by mandatory eighteen hour work days in order for brewers to catch up once funds were released.

According to Ms. Updegraff, product was returned by Eagle Distributing for being, “tainted,” and kegs were returned for poor quality. She would have to personally deliver new kegs to them, but eventually they lost motivation to keep a tap for the company.

She also says she was not given reimbursement for driving 7,000 miles in her personal vehicle – something she was promised in the beginning. She also wasn’t reimbursed $300 for expenses. She learned other employees were not being reimbursed, as well. She was told to start driving the company truck. When she finally got her reimbursement check, it bounced.

She also had to deal with vendors who had not been paid. She recalled one company who provided stickers for tap handles and were not paid for months. They continued to call her after she left the company, still seeking payment. Other former employees echoed her story of fielding calls, after their employment ended, from unpaid vendors.

By late May another paycheck bounced. A $1500 reimbursement check bounced. She received an apology and another check, which also bounced. The teller at Clayton Bank told her there was no money in the account. A call to the bookkeeper (Alliance P.S.C., an arm of Henry and Wallace) got an angry response, but the money was transferred.

Her tenure ended when she refused to work until she got paid. She and Adam had words. After leaving, she was forced to have a lawyer draft a letter to demand the final reimbursement she was owed. The company cut a cashier’s check the day they got her letter. She said it frustrated her that the money was there all along, but she had to fight for it every time.

According to Adam, and others, statements were made regarding the vendors to the effect of wanting them, “to feel pain.” Partnerships were formed and then broken. Black Sheep had an agreement with the company, for example, to provide barrels, and when the bill came due, Adam says he was told to find another vendor. In some instances, he said vendors were told checks were in the mail when, in fact, no checks had been sent. Companies began demanding cash in advance.

Of the continuing open sewage problem in the basement, Adam said it remained that way for an extended period because, once he was granted funds to fix it appropriately, contractors wouldn’t take the job because so many hadn’t been paid before and word had spread. It was, according to Adam, eventually repaired.

In December 2016, 708 E. Depot (home of Saw Works) and the brewing equipment was sold to Magnolia Corridor which is managed by Henry Sadiq. From that point forward rent was paid to him and the building will be turned over to his possession at the end of this month. The original plan for Saw Works, included new brewing equipment to be purchased by that time, which would be placed in Standard Knitting Mills. A tasting room was to be opened at Knoxville Center Mall.

Complicating matters, the license for Saw Works Brewing Company, LLC was revoked by the Labor and Workforce Department on 5/8/2017. The “agent,” for the business is listed as Walter Winchester of 800 S. Gay Street, attorney for Henry and Wallace. I spoke with a representative of the Labor and Workforce Department who confirmed that the company’s license with the state was revoked due to a lack of payment of unemployment taxes.

A confounding report on WBIR in July reported that Adam Palmer said there were no longer plans (as had previously been announced) for the Saw Works tasting room to open a second location in the Knoxville Center Mall and that, “the company could not come to terms with the landlord.” The oddity there is that “the company,” (Saw Works) and “the landlord,” of Knoxville Center Mall (Knoxville Partners) are one and the same under different names, all connected to Henry and Wallace and Brant Enderle.

Further compounding the strangeness, Adam had been, by that time, removed from the company. The article also states, directly contradicting the previous statement, “Patrick King with Henry and Wallace sent a statement on behalf of Knoxville Partners, ‘The plans are still moving forward for Saw Works to move into Knoxville Center Mall.’”

On August 15, a new beer permit was granted to the new owners (when BAJM called the note, officially taking Adam and John Palmer’s portion).  I’ve confirmed that co-owners Millennium Capitol did not sign that request, as is legally required of all owners with over 5% interest in a business wishing to manufacture or sell beer.

For the moment, the company operating as Saw Works Brewing Company has a tasting room on East Depot. They must vacate the building by the end of the month and they no longer own brewing equipment.

After unsuccessfully attempting to have a local brewery brew their beer, they have reached an agreement with Fat Bottom Brewing Company out of Nashville to brew the Saw Works brand. The beer will be brewed and distributed from Nashville. The company, which once employed ten, now employs four people.

Patrick King, of Henry and Wallace, spoke to me by phone after publication of the first article. He pointed out that Saw Works was struggling from the beginning and that was the motivation for Adam Palmer approaching their company for help. The meetings described by Adam, he says, were meetings where Adam was asking for additional money, whereas the plan was for the business to become self-supporting.

He says that after several years of Adam requesting a long series of additional outlays, each of which were supposed to make the company profitable, Brant Enderle asked Patrick this past spring to look into whether this should be continued or the relationship should be ended by taking Adam and John Palmer’s share. They decided it was not likely to change under Adam’s leadership and called the loan, in which Henry and Wallace had invested over $700,000.

Regarding bounced checks, he says they were written against an account that should have been filled by Adam Palmer with funds from sales of Saw Works and the funds he received from BAJM. Expenses, he says, always exceeded income, with a common range being $3,000 generated in a month and $10,000 spent. I asked why a bookkeeper (Alliance P.S.C., an arm of Henry and Wallace) would be willing to write a check on an empty account and he wasn’t certain.

He  told me vendor relationships are important to them and that they will, “figure out what is fair and equitable for each vendor.” When asked, he said it would be fine for vendors who are owed money to contact them. He said the beer license is to SWB Holdings which does not include Millennium Holdings, saying instead their ownership is in the Saw Works brand and therefore they do not have to be on the license.

He says they intend for the beer to continue to be a Knoxville brand and plan to open a local tasting room as soon as possible. He said the company plans to, “unearth ourselves from seven years of mismanagement,” and that they believe it is something worth investing in.