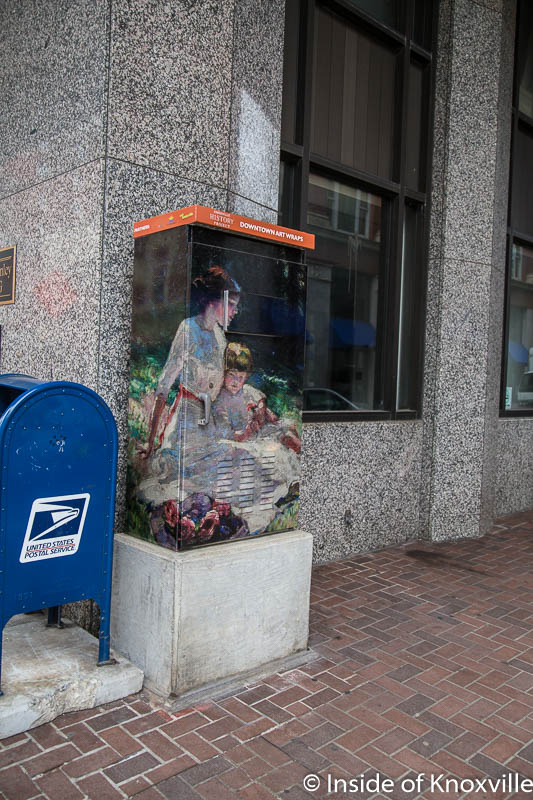 This past summer as the Urban Clan drove around the wild west, we stopped over in Missoula, Montana. I snapped a photo though the car window as I drove (don’t do this at home, children) of a buffalo “painted” on an electrical box. We’d noticed them in other cities as well across Montana and Wyoming and thought it a great idea we should bring back home. What we didn’t know was it was already cooking back home.

The Knoxville History Project developed the idea and took it to another level. The wraps (not actual painting) have started appearing around downtown and will feature mostly artists who have or had Knoxville connections. For the most part they’ll appear in logical contextual locations, though not always. The boxes are actually traffic engineering boxes that we generally simply don’t see as they fade into background.

Originally conceived as an idea to display more historic photographs of the city, such as those displayed on the banners on the Walnut Street and Dwight Kessel Garages, a shift was made to make them more colorful and, perhaps, more visually appealing. By focusing on works of art, the range of color and design offered a much broader palette.

Also joined in the effort by the Knoxville Museum of Art, many of the featured pieces come from their ongoing exhibition, Higher Ground: A Century of the Visual Arts in East Tennessee. The boxes will feature a work of art on the front and side panels. The sponsor of the piece will also be noted at the top on one side of the box while the other will contain biographical details of the artist and a photograph, where possible. Visit Knoxville and the city via the Public Arts Committee are also supporting the project.

The first two to appear are sponsored by City People through their grants program. The next to be installed will be sponsored by McCarty Holsaple McCarty and will feature sculptor Albert Milani who sculpted the eagles on the downtown post office.  Future wraps may be sponsored by anyone interested, simply by contacting the Knoxville History Project. The $1500 grant from City People covered the cost of the first two and the wrap was designed and applied by Graphic Creations.

The first to appear (at the southwest corner of Union and Gay) features Knoxville artist Catherine Wiley and an untitled impressionist painting from 1913, featuring a woman and a child in a meadow. Born just north of the city, she grew up in Fort Sanders, studied at UT and in New York City and belonged to the Nicholson Art League along with other Knoxville artists. They often met nearby at 604 South Gay Street.

The second is on the same block on Gay Street beside the Holston Building and at the edge of Krutch Park. This untitled landscape featuring a view of the chimneys in what is now the Great Smoky Mountains National Park, was painted by Charles Krutch in 1925. Krutch was born in Knoxville to German immigrant parents and grew up at 914 East Hill Avenue. The park is named for his nephew who left money for a downtown park which was completed in 1985. (Say It Like a Pro Tip: Unlike the medical device, it rhymes with pooch, like the little animals who leave deposits in the park.)

It’s another way that the Knoxville History Project under the leadership of Director Jack Neely and with the assistance of Paul James is working to promote the history of the city. You’ll find more about the Knoxville History Project here. It’s a worthy project to support financially  through a tax deductible gift. The website is also the spot to read the latest articles by Jack Neely and to see the schedule for upcoming history talks and walks and more.

In the meantime, keep an eye  out for more of these attractive wraps that add to our aesthetic experience while enhancing our understanding of who we are as a city.