Watching a Total Eclipse: What Does It Mean? 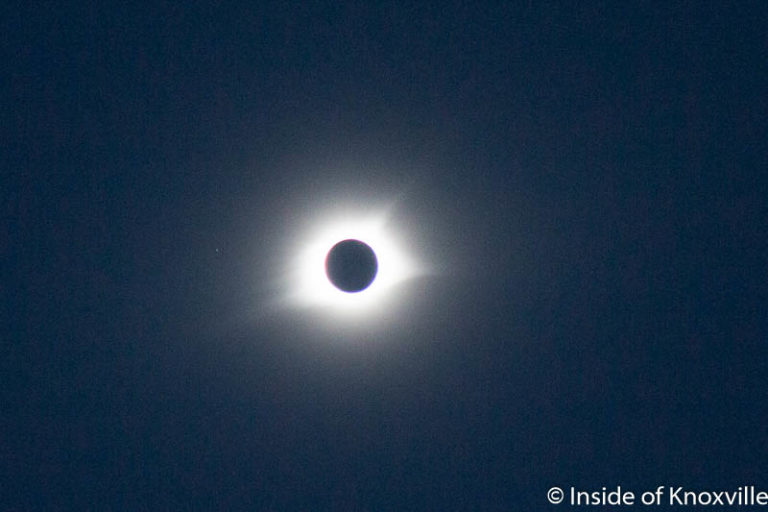 The constant buildup to yesterday’s eclipse began, arguably, ninety-nine years ago. In Jack Neely’s article on the topic, he noted that Knoxville news accounts of the 1918 (path of totality just south of Tennessee) contained references to the next big one in 2017. People in that day could not have imagined the intensity of media coverage which would lead up to this week’s event. It was constant enough that I’ll admit I began to be a bit annoyed. Got it: Moon will pass between earth and sun and darkness will fall. Big deal.

But the drumbeat continued. Along with the scientific predictions and observations came evangelists such as Jim Bakker and Anne Graham Loetz with their own interpretations. The pair figured it was some sort of sign to America, with Jim saying God told him in a dream that the darkness was to show God’s displeasure with the Obama years.

Urban Woman and I decided to get serious about where we’d take Urban Girl for the viewing, taking a day trip to Dayton, Tennessee to scout it out. The eclipse was still days away. Along the way, the dire warnings seemed everywhere: “Do Not Pull Off the Interstate for Eclipse!” “Prepare for Heavy Traffic on August 21!” Signs directed passersby into pastures for $20 per car. We saw more American flags on the back road we took from Sweetwater to Dayton than I’ve ever seen in one spot in my life. The display of patriotism was likely unrelated but, in the context, it was if all of America was banding together to face the oncoming darkness.

Honestly, I started to get nervous. Not so much about the eclipse portending the judgement of God, as much as the traffic. Maybe it really would be hard to get to a location for the viewing. Maybe we’d be stuck for days once we got there. “Ten million people trying to get home at once!” was one of the taglines I caught from a report I heard. As much as I loved the idea of taking Urban Girl to the site of the Scopes Monkey Trial for a discussion of science on the big day, we changed plans.

Urban Woman made the excellent suggestion that we drive to the Sequoyah Birthplace Museum in Vonore. It’s a spot we’ve loved over the years, often taking Urban Daughter when she was younger. We’d talk through the morning about history, then shift to science in the afternoon. Perfect. Bonus points for closer to home (forty-five minutes) and accessible via back roads the hordes might not discover. We learned that the museum was closed, but the decision was made.

Leaving home at 7:00 AM, I had the feeling we’d missed the window. The abandoned streets should have told me otherwise, but just added to the post-apocalyptic feel – maybe the rapture had come and we were left behind? I started out live tweeting, but as we cruised toward Vonore, I was reminded that cell phone reception isn’t as universal as it sometimes seems. Or was the loss of reception because of the strange natural or supernatural phenomenon building in the universe? Who could know?

We arrived at the museum about fifty minutes after departure for a trip that should have taken forty-five. As I’d stopped to send out a couple of tweets, we couldn’t really lay the five-minute delay on the traffic. We joined a line of about twenty cars waiting for the 9:00 AM gate opening, drove in, dropping a donation in the bucket as we went, and found a parking spot in one of their massive fields. We spread a blanket and waited.

Urban Girl bought a rabbit’s foot (hedging our doomsday bets?) and a slingshot in the gift shop (which was, helpfully, open) and we shot rocks into the river through the day. Eventually, our friend, Sam Maynard, invited us into the edge of the woods where he and two friends had set up a table spread with Sam’s excellent food. When they mentioned shade and a couple of extra chairs, we were sold. Friends Sonja and Allen joined us and our party was set. Of note, there were quite a few friends and acquaintances from downtown who found their way to the museum, so we saw familiar faces through the day.

Once at our spot, we met a nice fellow from London (England, not Kentucky) who had photographed an eclipse decades ago in England and lost the photographs. A cloudy day then, the clouds parted at the right time and he secured great shots – only to lose them over the subsequent years. He said this was the first time in the American south and he’d found the people to be more friendly than any where he’d traveled.

A family from Germany also joined us. A group of twenty-somethings who’d driven over from North Carolina, some of whom were from from Mexico, played guitars, harmonicas and sang. Another family nearby played charades. Balls were tossed, families chased one another through the trees. Some people swam in the lake.

After a blazingly hot day that even encouraged sweat in the shade, the eclipse finally began around 1:00 PM. Excitedly donning eclipse glasses, the crowds headed out into open spaces, gasping and exclaiming at incremental coverage as it occurred. Progress seemed slow and heat rendered constant observation significantly miserable. Most people came and went from their selected shade.

Before fading, as such, the light became more muted. Crickets and cicadas increased the volume of their noise. Butterflies inexplicably became more present in our little spot in the edge of the forest as our friend Sonia played “Dark Side of the Moon,” on her cell phone. The light continued to fade as the obstruction slowly expanded. The temperature dropped noticeably. As coverage approached 90%, groups moved into the open to watch more closely.

Darkening rapidly at the end, daylight disappeared to a near-dark that seemed to be a thing of itself, different somehow than a normal dawn or dusk. Luminescent. At complete coverage, the crowd cheered, clapped and stared in wonder, not only at the complete outline of the moon and the bursts of light around it, but at the effect it produced of simultaneous sunrise and sunset on the horizons. A member of our expanded informal group dropped to his knees and asked a young woman if she would be his bride. To the great relief of the assemblage of strangers watching the couple, she said, “yes.”

The retreat of the moon from its position in front of the sun didn’t hold as much interest as had its advent. The happy crowds dispersed, tents folded, chairs loaded and cars edging toward the exits. Traffic driving out proved much more intense than the trip in, though our commute of two hours for what should have been an hour to west Knoxville to drop off Urban Girl seemed a small price for the experience.

So, was it religious, transformative or otherwise life changing? Was there a secret meaning passed to onlookers from the universe or some otherwise benevolent being? It likely depends on who you ask. I heard people talking of the hand of God, of the wonder of nature and of how small a part we play in the drama that is this expanse of space we inhabit. For our group, it was an awe-inspiring event which, perhaps short of mystical, did remind us of the limits of our individual significance.

If any benefit were to be observed from the gatherings that happened in Vonore and across the nation, it might be that diverse people of different countries, races, generations and political persuasions shared a powerful experience and for a brief time our divisions – which seem so important to many of us on a daily basis – completely faded from our consciousness.

Maybe that’s the message: Simply that for a two-and-a-half minute stretch we can be a member of a diverse group and not have our individual distinctions and differences define us. If we can do it for a few minutes or hours, maybe there’s hope. That’s a pretty good message to take from a truly magnificent and powerful natural event.