We Talked About History All Week, Had a History Fair and Now Turn to Science (of the History Making Sort) 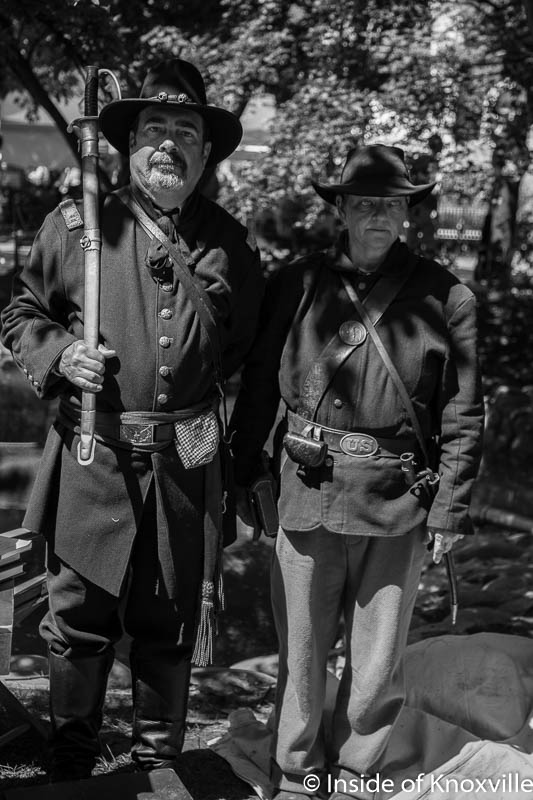 Has there been a week in which more Americans discussed our history than this past week? While the controversy over Confederate monuments isn’t new – New Orleans removed theirs with great angst on all sides this past winter – certainly, the extent of the nationwide public conversation born out of the events in Charlottesville was something unprecedented.

The festival, as always presented many different eras of U.S. history, starting with the colonial era and working its way through, with an emphasis on the wars along the way and uniformed soldiers from most of the various wars and conflicts. A time line of sorts started in the center of Krutch Park with the French and Indian War and moved circuitously through the park to culminate with the Vietnam war.

Displays were mounted by various groups throughout Krutch Park extension. We stopped and talked with the suffragists and Urban Girl collected a button. Another vendor offered free revolution-era fidget spinners of a sort. These were wooden and bisected by a string and, given the proper skill level, can spin long after the best fidget spinner has died on the dining room table. (If you don’t know what a fidget spinner is, ask an eight-year-old.) A series of bands also played from a stage there.

A children’s area was set up in the parking lot between the Conley Building and Krutch Park (across from Coffee and Chocolate). A long line of parents and children awaited balloon sculptures while others took their spots on the various numbers to begin the cake walk. A table of activities at one end allowed children to make poppies, and a table held pioneer-era toys. Urban Girl was particularly taken with a game involving a hoop tossed between players by crossing two sticks and uncrossing them rapidly. I think it is called “graces.” She said she could play it for hours and it felt as if we did. Our record was fourteen consecutive catches.

Numerous activities were also offered for the adults, such as a day long series of films offered at the Tennessee Theatre, a tour of various Knoxville historic homes, opened up for free. The history museum, itself, was open and free of admission. Several history tours were offered including one by the Knoxville History Project’s Jack Neely who discussed the World’s Fair. (It stings a little when events I remember very well are considered worthy topics for a historical conversation.) Davy Crockett’s birthday was celebrated mid afternoon and an antique fair was held behind the history center.

It’s a good, annual reminder that our history is an increasingly long and complicated one. If nothing else comes of this past week’s events, the fact that our history is complicated and we have a need to continue our conversation about its meaning would be a worthwhile take away. As the fair demonstrates, there are many ways to learn about history which do not involve monuments. I’d love to see the reenactors expanded to include some discussing other histories of east Tennessee, including native American and African-American history. Someone to tell the Cal Johnson story, for example, would be a great addition.

Of course, all that is so last weekend as we turn our attention and fervor to today’s eclipse. Jack Neely wrote a typically excellent article on the topic of Knoxville’s eclipse history. The events have often been deemed anti-climactic. Will that be the case today? Urban Woman and I scouted about last week and decided we will (attempt to?) drive to Vonore to the Sequoyah Museum. Will we make it? Will the traffic be impossible? Will we all die? Numerous articles and flashing signs on the Interstates are ominous. We’ll see. I’ll tweet (@KnoxUrbanGuy) our (mis?)adventures through the day. Have fun and be safe – don’t stare at the sun without those glasses!

And look at us! History is a topic of conversation in America one week and science the next. We’re practically turning into Europe.