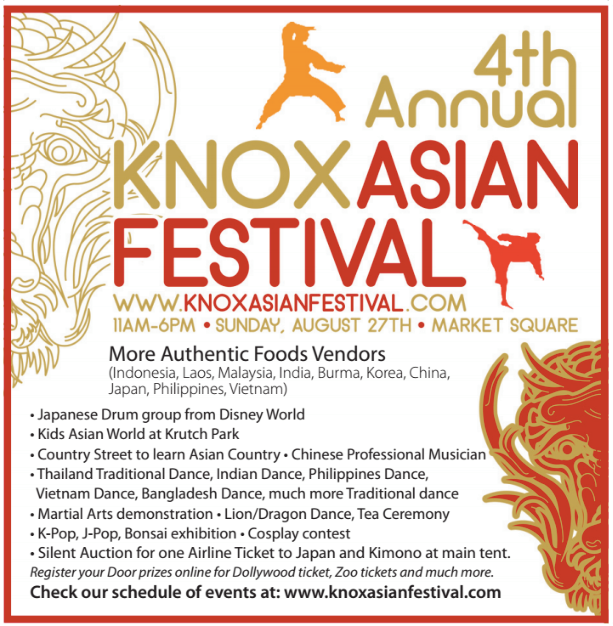 The growth of the Asian Festival has been fun to follow. Festival organizers weren’t sure what to expect the first time around. Held in Krutch Park, response was good. The second year, held in the same spot, the festival overflowed the small confines of Krutch Park extension. A year ago the festival moved to incorporate Market Square and Market Street. It was a bold move and, once again, organizers weren’t sure they could fill the space.

Despite falling in the middle of a nine-day stretch of 90+ temperatures, the event took a tremendous leap and drew thousands, filling Market Square and producing long lines at the vendors booths for a range of Asian cuisines. Our family took frequent breaks to endure the heat and I felt for those who had no place to retreat. This year’s weather promises to be much better, with a high in the mid-eighties and fall-like humidity.

I recently spoke to Director of Marketing and Public Relations, Rachel Rui (listen to the full interview here), who started as a participant in the second Asian Festival. She said estimates for the first year were about 3,000 participants, with the second year nearly doubling to 7,000 and last year topping out at more than double that: 15,000. Noting the long lines at food vendor stations last year, she said the waits should be shorter this year because they’ve added a number of food providers, bringing the number to around twenty. Some of the additions include Indonesian and Burmese foods made by local residents who are working to bring food like their mother’s served in their native country. They’ve also expanded the footprint of the festival to include both Union and Clinch Avenues. The footprint and the numbers make it one of the larger festivals in a city that boasts quite a few large festivals.

I was surprised to hear her echo a similar reaction to the one I had the first year: a realization that the local Asian population is larger than I had thought. One of the important functions played by festivals such as this one is to do just that. Raise awareness that we do have unique groups among us and to raise their profile, if briefly, so they aren’t anonymous in our community. These are our neighbors and we get to meet them in a setting centered around their culture and not ours, which is an unusual circumstance in Knoxville where we don’t have a Koreatown, Chinatown or Japantown.

In addition to the food, country booths will be set up on Clinch Avenue. As in past years, children can participate in activities at the various booths and learn about the different countries. They will be issued a passport which, if stamped at the various booths, may be turned in at the end of the day for a, “sweet treat.” As did the organizers of Finding Waldo this summer, the organizers of the festival have also realized that adults also want to participate and they’ve set up a pass for that this year.

Entertainment will also be a highlight of the festival and will work off four different stages. A parade of nations will begin at 11:00 AM. Following that will be a string of performances based on cultures from all over the world, including Vietnam, Thailand, Japan, India, the Philippines, China, Bangladesh and more. You’ll also find Lion Dances, a Bonsai Exhibit, tea ceremonies and martial arts exhibitions. A silent auction for a trip to Tokyo will also be offered.

A huge highlight of this year’s entertainment are two professional troops being brought in for the festival. Matsuriza (a Japanese drum group) which normally performs in Disney’s Epcot has been brought to Knoxville via a grant to the festival. Additionally, professional Chinese musicians will perform with the MTSU Chinese Music Ensemble. This level of performance is unusual for a city our size and generally is very expensive to attend.

Check out the group’s website and “like” them on FB. The festival is free and runs from 11:00 AM to 6:00 PM. I hope to see you there for what promises to be a great day!