Monument Battle Lines Drawn in Knoxville – But Are the Lines Really That Clear? 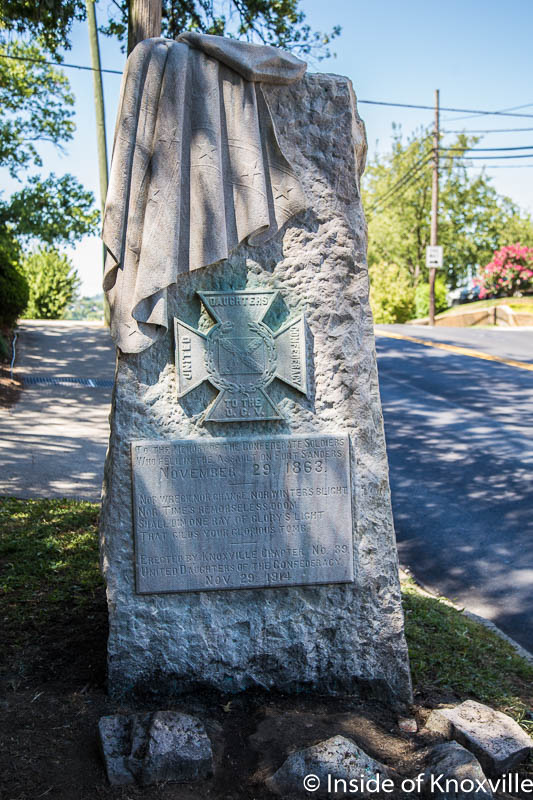 It’s not a new issue, by any means, and Charlottesville was not the first place it played out. New Orleans recently removed many of the statues commemorating the Confederacy. One constituted a memorial to the white citizens who re-established white control of the city in 1874 in a bloody battle leaving 100 injured or dead. Erected in 1891, an inscription was added in 1932 which read, “United States troops took over the state government and reinstated the usurpers but the national election of November 1876 recognized white supremacy in the South and gave us our state.”

Charlottesville is the most recent spot where the debate reignited and violence ensued when white nationalists and neo-Nazis staged a march in support of the Robert E. Lee statue there. A young woman, Heather Heyer, was killed when a young man with white supremacist views drove his car into a crowd of counter protesters.

It is also not as a simple issue, as many of us would like to believe. Most of you have already decided your opinion the issue and very few will read this entire, very lengthy, article with an open mind. We prefer tweets and memes. Everything we need to know can be placed on a bumper sticker.

In a Knoxville rally a week ago Sunday, the declaration was made that these groups would not be allowed to come to Knoxville. The challenge was accepted and a rally was planned to “protect” free speech and one of the few monuments in Knoxville related to the war, which remembers the Confederate soldiers who died in the Battle of Fort Sanders. This followed the vandalism of the marker in question and an online petition to remove the monument.

In the days that have followed, there is some indication that the original group which “planned,” the rally has dropped out, saying local citizens would carry it through. There’s a gathering of white supremacists in the mountains which roughly coincides with the protest, so, who knows if they’ll show? They also have a much larger “summit” planned for the Smoky Mountains on September 30, so we could hear from them, again. Meanwhile, several counter protests or actions are also planned for this weekend.

Additionally, there has been a proliferation of online petitions. My search yielded five different petitions, four requesting the monument be kept and one requesting it be removed. The “remain” petitions ranged from 55 supporters to just over 6,000, while the original “remove” petition has a bit over 2,200. The statements on the various petitions include a good bit of incorrect information. The pro-remove petition claims east Tennessee was, “mostly unionist,” and I’m not sure that’s accurate. I think we were pretty evenly divided.

East Tennessee itself lacks cultural recognition of this traumatic time. After the war, regional attitudes dictated leaving the past alone. It was much too divisive to memorialize and commemorate. The very fact that all elements of a civil war played out on Knoxville’s stage —a divided civilian population, fighting-age men enlisted for armies on both sides, social institutions tested to the limit, human nature versus social control — made it too dangerous a memory. After the surrender, the citizens felt they could not live peaceably together if the past continued to play an active role. Thus, no true battlefield park was ever established or downtown monuments erected. No avenues* or buildings were named for wartime heroes. While a wealth of family and personal stories still exists, the larger cultural identification with that part of the past is gone.

One of the “remain,” petitions inexplicably brings up the allegations of MLK, Jr.’s anti-gay views suggesting, I’m guessing, that therefore we should remove his likeness wherever it is displayed, equating homophobia in the 1960s to treason in the 1860s. One anti-remove petition claims that “1000 Confederate soldiers died in fifteen minutes,” in the battle of Fort Sanders. In fact, while there were over 800 casualties, that includes the wounded and 129 Confederate soldiers were actually killed in the twenty minute battle. The remains of 105 of them now rest in Bethel Cemetery, while the remains of the other fourteen are very possibly still interred near the current monument, the precise locations lost to history. Another claims that Confederate soldiers are recognized as U.S. veterans, which isn’t true.

Most of us find it very satisfying to use words like “history,” “heritage,” “hate,” “home,” “pride,” “equality” and others while feeling a certainty we, personally, are on the correct side of those words. Our tendency to revel in our self-righteousness is abetted on social media to the point that the rush that comes from making morally superior proclamations must rival opioid abuse in this country for our drug of choice. We have an instant audience, we are certain we are correct and it feels good!

But while many of us have already formulated opinions on the removal of statues such as Robert E. Lee or Nathan Bedford Forrest, is the marker in question in Fort Sanders analogous? The statues of specific larger-than-life generals from the war seem designed to glorify and immortalize a person and a cause, debate, if you will, the nature of the cause. Similarly, the intent of statues of “Johnny Reb,” defiantly facing north on many small southern town court squares seems clear in intent. What exactly was the purpose of the marker in Fort Sanders and does it matter?

A couple of months ago the National Trust for Historic Preservation President and CEO Stephanie Meeks issued a statement on the broader topic. She said:

At the National Trust, we believe that historic preservation requires taking our history seriously. We have an obligation to confront the complex and difficult chapters of our past . . .

That goes for the Civil War, our nation’s bloodiest and most divisive conflict, as well . . .

While some of these monuments were erected shortly after the war by grieving Southern families to honor the valor of fallen leaders and loved ones, many more were put in place for a more troubling purpose. Decades after the war, advocates of the Lost Cause erected these monuments all over the country to vindicate the Confederacy at the bar of history, erase the central issues of slavery and emancipation from our understanding of the war, and reaffirm a system of state-sanctioned white supremacy . . .

These Confederate monuments are historically significant and essential to understanding a critical period of our nation’s history. Just as many of them do not reflect, and are in fact abhorrent to, our values as a diverse and inclusive nation. We cannot and should not erase our history. But we also want our public monuments, on public land and supported by public funding, to uphold our public values . . .

We should always remember the past, but we do not necessarily need to revere it . . .

The marker in Fort Sanders was erected in 1914, a few years prior to (this has been edited to reflect they were not raised the same year) the marker commemorating the 79th New York Infantry who fought on the Union side. The marker states, “To the Memory of the Confederate Soldiers who fell in the assault on Fort Sanders, November 29, 1863.” A contemporary newspaper account at the time (Putnam County Herald) stated:

The purpose of the Daughters of the the Confederacy is to leave a tangible reminder of a bit of interesting, history in the Civil war, and any survivor of the battle in either of the armies who may see this may feel an interest in being present when the marker is to take its place on the grounds that marked one of the interesting events of a war which is a part of the country’s history, the rancor of which has been forgotten. And those of us yet living who lived in those eventful days of the sixties of the last century, congratulate ourselves that while we were once called enemies we are now firm friends, all of us standing by and doing honor to the flag of our fathers of the Revolutionary period, the founders of a glorious republic.

I spoke to my friend Calvin Chappelle, who has been Executive Director at the Mabry Hazen house for the last decade. Noting the complexity of history generally, and the civil war specifically, he pointed to what may be a different way forward. He suggested the battlefield monuments should stay, but he’d love to see a statue to the 1st United States Colored Heavy Artillery regiment erected in Knoxville. He feels it would be better solution than simply, “taking down a monument.”

So, a protest and a counter-protest will be held on Saturday. There is a counter-protest meet-up at 11:30 on the World’s Fair Park. I found one counter-protest Facebook Page here and another here. For those wanting to share a positive message, but avoid the epicenter of potential conflict, a Kindness Rally will be held on Krutch Park at 1:00 PM. The city, attempting to take precautions to avoid a volatile and potentially dangerous situation issued the following decisions and guidelines:

So what do you believe and what will you do? Some may choose to defend the monument as it is historic and honors war dead on the site where they died and some may still be buried. Does that make them racist? Some will defend the monuments based on, “heritage,” and, perhaps others present, like the group originally planning the march, believe white people are superior to all others.

And what does counter-demonstrating mean? You want the monument removed? Is it really the same as a statue of Robert E. Lee? What if you want it to stay, but don’t want neo-Nazis in our home, which side do you choose?

Are the people who stay home cowards unwilling to make a stand or, perhaps, people who believe we shouldn’t give attention to neo-Nazis. Maybe, after the events in Charlottesville, they simply feel it isn’t safe to attend.

It’s complicated. Maybe if we could simply admit that, back off from our tribal memes, tweets and bumper stickers for a while and actually talk to our neighbors, we might recognize some point of connection. No, not necessarily with neo-Nazis or white nationalists, but most of our neighbors aren’t that and they aren’t badly intentioned, we simply disagree. Maybe it would help if we disagreed a bit more quietly, more introspectively and actually listened to each other with a true interest in building bridges to heal our bitter divisions, rather than with a simple desire to be morally superior.

* While the quote above is accurate, the information appears not to be regarding the non-naming of Avenues. We have several in the Beaumont area that appear to be named after generals including, for example, Pickett. The error was pointed out by a commenter on Facebook.