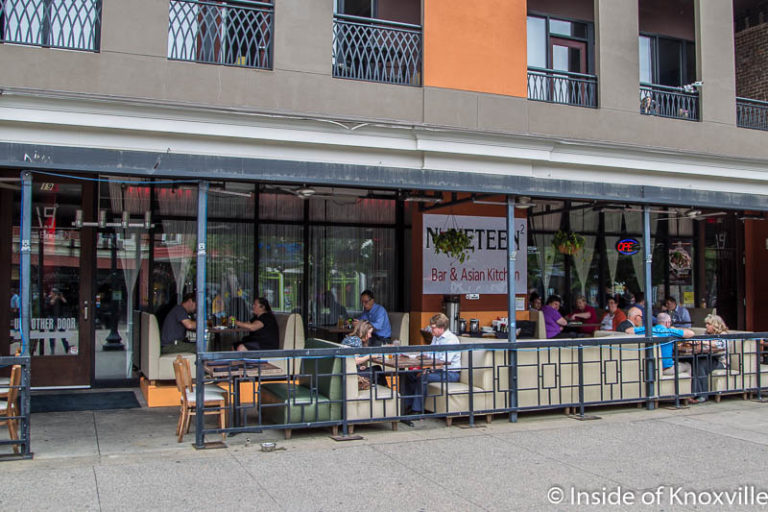 You may have noticed a few weeks ago that Cocoa Moon closed its doors. Posted signs said remodeling was underway for the restaurant that was once Koi Fusion and Cocoa Moon, then just Cocoa Moon, though it retained both Latin and Asian dishes in different sections of its menu.

The restaurant has re-opened as 19² Bar and Asian Kitchen and, while some remodeling happened, more changes were underway. I spoke to Raymond Chow with the 1921 Restaurant Group which purchased the business. I learned the restaurant is their first acquisition and they have made changes both inside the restaurant and to the menu.

Ending the dual concept which has been a part of the restaurant for so long, the menu focuses exclusively on Asian dishes, with more Chinese cuisine represented along with Thai, Korean, Vietnamese and Japanese entrees. Making the point emphatic in a structural sense, the wall that separated the two sides is gone. They’ve also added an interesting piece to the center of the bar and upgraded the appearance of the bar.

While you’ll recognize some of the same dishes found on the previous menu, you’ll also find new ones. Even the old favorites have new twists. Mr. Chow pointed out that new chefs were brought in to work the kitchen – one from Boston and another locally. When I asked their names, he laughed and said their names are Chinese, somehow discerning my seriously limited translation skills.

He said the two had a collective fifty years experience cooking Asian food and that they have their own spin on all the dishes, including, importantly, their own recipes for making all the various sauces. You’ll find the full menu here.

Urban Woman and I sampled a large portion of the menu (no sacrifice too great for my readers!), starting with soups. We shared the Hot and Sour Soup ($4) and I had the Miso Soup ($3). Both were good and we agreed the Hot and Sour would be a cold-weather go-to. Continuing the sharing, we had the specials listed on the chalk boards. A lunch menu lists a large number of items for $8 and all include an egg roll. The special was two of those dishes – Sweet and Sour Chicken and General Tso’s Chicken – each at 20% off. At $6.40 each, either is ample for a typical lunch.

We didn’t stop there, of course, we also had Chinese doughnuts with chocolate sauce ($5). These come in a mound of six and, unfortunately, as we were entering food comas by this time, I failed to take a photograph. Suffice to say the dessert was the highlight of the meal, though we each only ate one and carried the remainder home to share with little Urbans.

The restaurant currently has a selection of beer (Dogfish Head 90 Minute IPA was on tap for $5 when we were there), but they are awaiting their liquor license. Also pending is their dance license. In another of Tennessee’s obscure alcohol laws, dancing is not allowed without a special license in an establishment serving beer. A previous incarnation of the business was actually cited when some customers began to dance. That will be covered this go-round.

Once the licenses are in place, a range of cocktails (listed on the full menu) and waiters and waitresses should be able to recommend pairings with the various dishes. Mr. Chow said it would be a particular point of interest, with cocktails being tailored for Asian food. You also may encounter live music eventually.

The event space in the rear is still available for events, parties, business meetings and any other small gathering. It is by reservation only and requires an additional charge. Accommodating 40 to 50 people, it may be reserved via the web page.