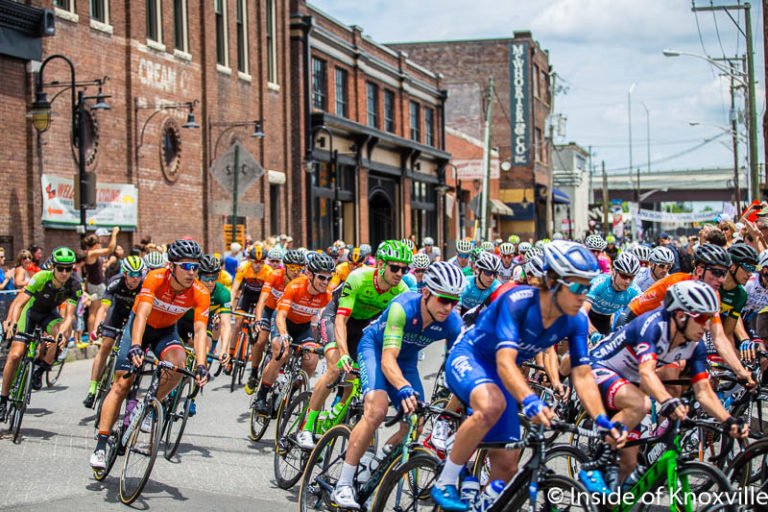 What an incredibly great Sunday! The sun came out mid-morning, the humidity stayed below normal and a perfect day was set for cycling. Knoxville came out into the streets and the hillsides and exciting races ensued. By the end of the day USA Cycling officials made it clear they intend to return next year.

The action actually started the day before with the Pedal for the Red and a chance for amateurs to take to the time trial course. The morning started rainy, but the sun slipped out mid-morning. Time trials followed the amateur ride of time trials running from the Old City into Sequoyah Hills. Amber Neben, at age 42, won the women’s time trials and followed up on Sunday by winning the 79 mile women’s road race.

I wasn’t able to make the time trials on Saturday and, because of the radio show, missed the women’s race, arriving just in time to see Ms. Neben cross the finish line and to wait for the beginning of the men’s race. It gave me a chance to check out the expo and chat with some of the people gathered. I met someone newly moved from Atlanta who is loving living in downtown Knoxville. Large crowds had gathered including many friends.

I shot the beginning of the men’s race and then, coffee and camera in hand, walked the course, trailing the riders and shooting when they caught me. It made for a range of shots and covered the course. Timing was just about perfect as I made one loop of the 7.9 mile route in just under the time it took the riders to cover it fourteen times for a total of 109 miles.

The riders caught me on State Street at Cumberland and, happily, the fine folks at Blount Mansion handed me a bottle of water as I passed there. I shot the riders on the Gay Street Bridge with a backdrop of the city and then moved to a position on Sherrod Road where the course featured a 14% gradient. If that doesn’t sound like much to you, check out Sherrod on foot sometime. It was hard to walk, let alone ride at break-neck speed fourteen times.

I caught them on the descent, which is as harrowing as the hill is intimidating to climb in the first place. The route then led the riders on an up and back loop covering a section of the James White Parkway – I saw them twice along that way – and then over the South Knoxville Bridge where I caught them, again.

I discovered the sidewalk I took up into the city from the river led me into Morningside Park with no path to the race route, so I climbed a very steep grassy hill to reach the top where I waited with some policemen. A breakaway had maintained a lead since very early in the race – running out to as much as two minutes. The policeman I spoke to was certain the peloton  could not catch them. I assured him it could and as the riders caught me around the tenth lap, they had, indeed, consumed the riders.

I watched the next two passes at ninety degree turns, which the riders took without incident. In fact, if there were any wrecks I didn’t see them or hear about them. The dry roads and calm winds, no doubt, assisted in that outcome. If we’d had some of the weather we experienced just a few days earlier, we could have experienced a much messier race.

Knoxville showed up in a great way all along the race route, even managing a few crazy costumes worthy of the Tour de France. South Knoxville came out in force and most of the route had at least a few people sprinkled about. I think we’ll do better next year. It is a spectacularly fun event and one not to be missed. By the time Larry Warbasse crossed the finish line to take the race, the crowd at the finish line was large and rowdy. I think he felt the love.

Special thanks to my friend, Brett Burdick for shooting me a couple of his excellent photographs (included below):

I’m including only a few of my 100 or so photographs here. Hopefully, I will be able to post the full collection to the Inside of Knoxville Facebook page later today. If you’d like to learn more about professional cycling, I’d encourage you to watch the Tour de France starting this Saturday. A rudimentary understanding of the sport goes a long way toward making a race like the one we hosted a lot more fun.

Shout out to Visit Knoxville for snagging this great event. I can’t wait for next year.