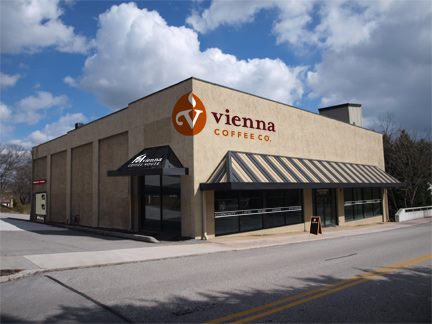 It’s something that has been on John Clark’s radar for a long time. The first time the two of us discussed the possibility was nearly three years ago. Clark, owner and operator of Vienna Coffee, has long wanted a presence in downtown Knoxville, so when the Knoxville Leadership Foundation who own the old Regas Building and operate the Gathering Place reached out to him, he was intrigued.

The result of their conversations is that Vienna Coffee will follow its first location in Maryville with a second in the Regas Building. John says the build-out is solid, with a highly functional space and great infrastructure, including a large grease trap in place and ready to use. With the addition of soft seating and some warm decor, he hopes to replicate the welcoming vibe established in the first location, in Maryville.

Much of what has made the Maryville location so successful will be present in the new location. While the menu may be more limited initially – they recognize the area will be a construction zone for the next eighteen months, with Regas Square condos under construction – they will start with the full complement of coffee beverages – and will eventually add the soups, sandwiches and made-from-scratch baked goods for which they are known.

Looking at the construction period as a time to perfect the new location, they’ll be adding some new roasts, emphasizing avant garde and “third wave coffees” along with lighter roasts than has been the case thus far in their evolution. The thinking is that by the time Regas Square is taking occupants, the nexus of downtown will have shifted in their direction and they will have a mature concept for downtown.

The space, at about 3,000 square feet, is large by downtown coffee shop standards, but just about half the space they occupy in Maryville. The difference is accounted for by the fact that the roastery is located in Maryville and they will only roast in Knoxville on special occasions with a mobile roaster.

The Maryville location is known as a welcoming business environment and John hopes the new location becomes a place where people meet for business purposes while others enjoy hanging out with good coffee and free wi-fi. The Maryville location has also become known for fostering the local music scene. Karen Reynolds has handled programming there and John hopes the new location will eventually be known as a place to hear local singer-songwriters, as well.

The new location will, of course, serve the people who use the building for conferences and those who work there daily. It will also be the closest coffee shop to Regas Square, but John hopes the appeal reaches beyond the nearby workers and residents. He envisions the area outside the building filled with inviting tables, giving people on the other side of the tracks a reason to walk over.

As with the Maryville restaurant, they’ll eventually have a full selection of breakfast and lunch items, but they’ll also have a limited selection of excellent wines and several taps. The taps will always include one  for their nitro coffee, but several will offer carefully selected, local craft beers. John wants the new location to be a place the community gathers and he doesn’t want people to feel they have to be coffee lovers to find the place attractive.

The emphasis, as it has been from the beginning, will be on delivering an excellent cup of coffee. While they purchase many of their beans through wholesalers, they have also cultivated relationships with growers in Ethiopia and Guatemala, visiting their farms, sharing meals in their homes and working to make their crops more in line with what the company is attempting to brew. A number of their beans are certified organic.

In their efforts to constantly improve their products, they’ve hired Phillip Hatter who they, affectionately, call “Ocho,” because of his eighth place finish in the Brewer’s Cup. The first two rounds of the competition were held last winter in Knoxville and Austin and Phillip moved from the Knoxville competition to the finals in Seattle. Both rounds required contestants to make the best coffee they could make from a set of parameters and the same beans and the finals included making a specialty coffee.

Phillip is the new Director of Coffee and Training and has already held “cuppings” in Maryville and those will be extended to the Knoxville location, with the public invited to sample different coffees while developing their palate and expanding their language for discussing coffee. It should, “help our customers slice off the nuance” of different coffees, John said.

Hours may initially be limited – he’s thinking 7:00 or 8:00 AM to 3:00 PM Monday through Friday and, perhaps 8:00 AM to 9:00 PM on Saturday and closed on Sundays. After construction at Regas Square is complete, the hours will expand dramatically.

John says of the new location, “Downtown Knoxville has become the place to be. It has come such a long way. If we want to be recognized regionally, we have to be downtown.” He says it was part of his original business plan to expand to five locations before he retires and one of those was always to be downtown Knoxville. He wants to be in places that feel like a community. He mentioned north, east and south Knoxville before indicating that south Knoxville will likely be next, with a location already in focus.

Look for them early this fall. Watch them grow. Expect more news.

Programming note: For those of you paying careful attention, you know this breaks my summer pattern of M-W-F articles. This breaking news required an article today and, so, this replaces my Friday article. Look for the 10 Day Planner on Sunday and also join me on the radio for KnoxCentric at 10:00 AM on WUTK. My guests will be Calvin Chappelle of the Mabry-Hazen House and Randall Brown of QuartJar.