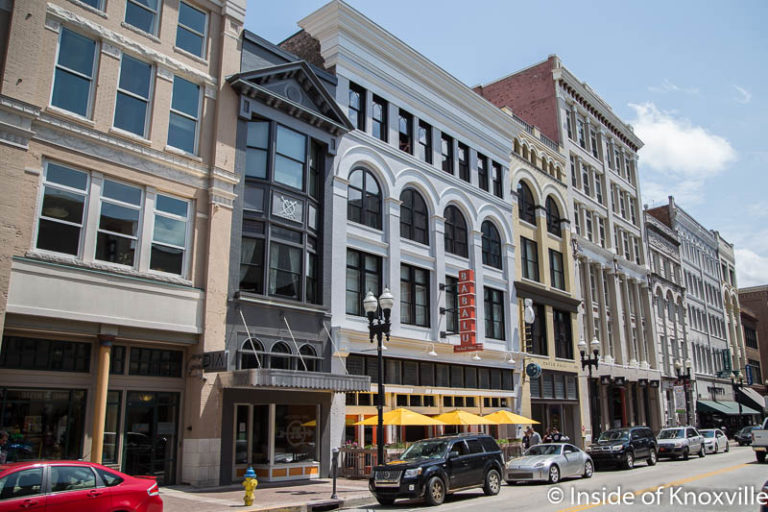 Let’s take a look into a couple of buildings that have generated high interest in recent months and years. The JC Penney Building was brought back from a shell to include Maple Hall (and The Parlor at Maple Hall), Babalu, Archers/Cruze Farm Milk Shop and residential spaces. Marble Alley was our first ground-up residential construction downtown in a generation. The first is, I believe, fully sold and Marble Alley is at 90% occupancy.

The JC Penney Building is actually a set of three buildings built just after the big fire that destroyed most of that block of Gay Street in 1897. At one point it was the home of Sterchi Brother’s Furniture Company and it is this building that James Agee references early in A Death in the Family. J.C. Penney occupied the building from about 1935, for about fifty years, hence the name that has stuck.

Originally intended to be leased as apartments, the recently constructed homes were shifted to condos at the very last minute and sold briskly. Included on the tour were two homes, the first on the back side of the building and the owner was one of the first to purchase, acting as soon as the announcement was delivered that the units would be sold, rather than rented.

Beautiful wood floors run throughout, with lots of exposed brick and a semi-industrial feel. A back door may be opened to provide fresh air and a more “outdoor” feel in good weather. A creche in the middle of one of the brick walls adds architectural interest. The owner considered covering it, before changing course and decided to emphasize it, instead. The home features two bedrooms and two baths.

The second J.C. Penney unit included on the tour faces Gay Street, with excellent views and massive windows.  Just outside one of the windows, the Babalu sign is visible. Like all the units in the building, support beams were left, not only in place, but in their unpolished condition and they add great character to each of the homes. This home is larger than the first, and includes three bedrooms and  a larger living space.

The kitchen includes a very large counter top and bar with seating. The counter tops are cement and were designed and constructed by Justin Paulk at Paulk and Company. The exposed brick, cement, remaining plaster and support beams give the home character to spare.

Marble Alley Lofts include 248 units ranging in size from a 500 square foot studio to a two bedroom, two bath unit with 1187 square feet. Prices range from $974 per month to $1,879 per month. Response has been rapid and clear, as demonstrated by the 90% occupancy rate just over a year since opening.

The unit included on the tour is a one bedroom, one bath unit with just over 670 square feet and costing roughly $1300 per month. The couple who live there love it and have enjoyed living there for the last year. They pointed to the balcony as one of their favorite features. With ample room for a table for two and plants, the balcony features one of my favorite views from the building. The character of the Old City is visible in the various angles and intersections of the building lines. Also visible: the back of the 100 block and, further out, Sharp’s Ridge to the north and House Mountain to the east.

The views are very different from the various sides of the building, some with views of the Smoky Mountains in the distance and others with varying angles of the city skyline. Residents also enjoy attractive common spaces, work out facilities, a salt water pool and outdoor lounging and grilling areas.

This pairing of buildings illustrates as well as any the different kinds of homes available downtown. One includes owner-occupied condos, the other leased apartments. One has numerous amenities more common to suburban apartments, the other direct access to Gay Street. One is in the middle of the action, the other removed. One building is new, the other historic. Which of these appeal to a particular person is a matter of personal preference. That we have these choices is what makes downtown appeal to a wide range of folks.

Tomorrow we’ll move to the 100 block and the Old City for a look at three additional homes there.