A Look at the Fire Street Lofts and The Emporium (AKA City People Home Tour 2017, Part Three) 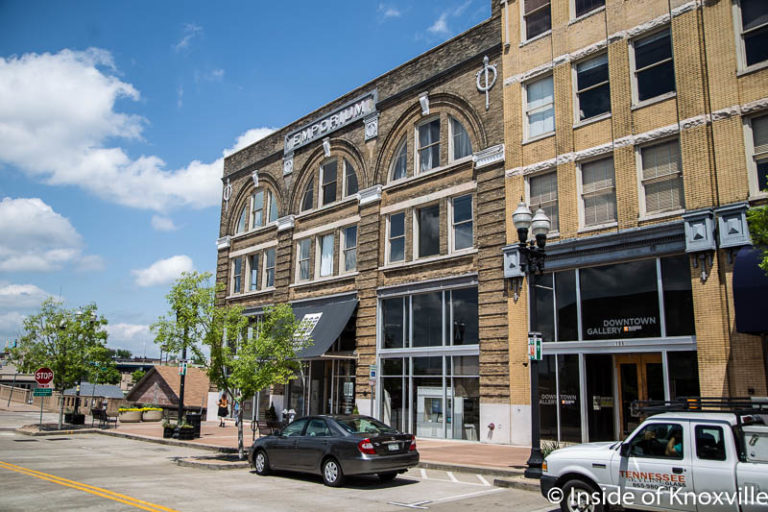 Today we’ll take a final look at a rainy, but successful City People Home Tour. While we each probably had our favorites along the way, the homes this year seemed, to Urban Woman and myself to be attractive, interesting spaces. We thought the tour was a particularly strong one and we’ll look forward to next next year’s version.

Two units in Fire Street Lofts highlighted the range of homes available there. Built in 1925, the building is one of the newer constructions in the Old City, though we won’t be able to say that for long, with the advent of the Crozier, the first new construction in the Old City in more than a generation.

Originally a warehouse for Daniel Briscoe and Company, it was a part of a garments district which saw the manufacture of a range of apparel. It renamed “Fire Street Lofts” by David Dewhirst and Buzz Goss when they redeveloped it as condos in 2006.

The first unit we visited in the Fire Street Lofts is in the basement and is utilized as a second, “city” home for a couple who lives outside the city. It’s basically a straight, “shot-gun” style home with one end devoted to living space, a kitchen in the narrow middle section, backed by a closet, and a bedroom section on the opposite end. The only internal doors lead to a bathroom and a closet.

While small, the unit has tons of exposed brick and a beautiful hardwood floor. It also has some access to light through half-windows at ground level. Interestingly, it has a “back door,” entrance into the alley between Fire Street Lofts and The Emporium. The owner said it works as a perfect weekend get-away to the city, but I could see myself being comfortable there if I were single. For a full-time home, it might be a bit snug for a couple.

The second unit in Fire Street Lofts is much larger and serves as a permanent home in the city. The first feature obvious when walking into the unit is the fact that beautiful wood dominates both the flooring and the ceiling. Exposed beams and boards above provide a perfect accent and a rustic feel to the home.

The master bedroom and bath is a beautiful room featuring exposed wooden support beams and a great private balcony offering a great view of  the JFG building and a wider view of a portion of the Old City. It’s the open design of the great room with living space, dining area, kitchen and access to a large balcony that is most breathtaking.

Windows line two walls offering great light to a room with tons of exposed wood and brick. Beautiful kitchen cabinets and countertops fit the feel of this very warmly decorated home. The windows offer views of Jackson Avenue, the Old City and the Jackson Terminal Building. It’s a great home in a very nice spot bridging the 100 block of Gay Street and the Old City.

The final home on the tour was in the Emporium Building, which is actually two adjacent buildings referred to by the same name. Completed in 1902 and home to the Sterchi Furniture store, it is noted for the arches in one of the buildings. The 1919 viaduct project rendered its first floor to subterranean status. The space left by the missing building beside it has been utilized by developers as a common courtyard for residents.

Originally owned by downtown preservationist pioneer Kristopher Kendrick, the buildings were converted to residential properties above street level by David Dewhirst, who bought the property from Kendrick in 2001. The arts complex for which the building is currently most know was completed in 2007 offering studios to artists and a home to the offices of the Arts and Cultural Alliance.

The home featured on the tour was one of the most unique. As owner Lindsey Cody declared as we walked in the door, “I’m not afraid of color, am I?” The answer would be, “no,” as the home is easily one of the most colorful and fun I’ve ever seen downtown – or anywhere that I can recall.

Multi-colored lights line the entry hallway and are plentiful in every room. Also present are b-movie posters, color palettes and posters from events around the world (one from Paris caught my eye)  and other touches that Lindsey proudly explained, may be found for a bargain. Lava lamps, faux fire places and other moving light sources also dotted the rooms.

Multi-colored rugs covered portions of the beautiful floor – which Lindsey pointed out were lovingly refinished by David Dewhirst’s crews. Colorful glass and earthenware served both as functional pieces and as decor in the open shelving. The backdrop to the kitchen is painted a lime green and even the coffee pot is a bright red. Function and decor really were indistinguishable.

Centering the main living room was a beautiful full-sized grand piano which Lindsey played growing up and which had been stored at his parent’s home. A highlight of the tour for us was when Lindsey played “a jazzy version” of the Stephen Foster song, “Old Folks at Home,” (Swanee River) on the piano. When the time came to move it in, he explained to David Dewhirst that he would need to live in the home for many years to make it worth the move. He expects to do just that. Originally working on the same block as his home, he now has a commute to west Knoxville.

And so concluded another successful installment of the City People Downtown Home Tour. Would every home be perfect for you or anyone else? Of course not. They come in a wide range of costs, some are rental and some are owner-occupied.  Some are closer to Market Square and Gay Street, others are further away. Some are near the bright lights or in the dimly lit corners of the city. Some are in quieter spots and others closer to trains or fire engines.