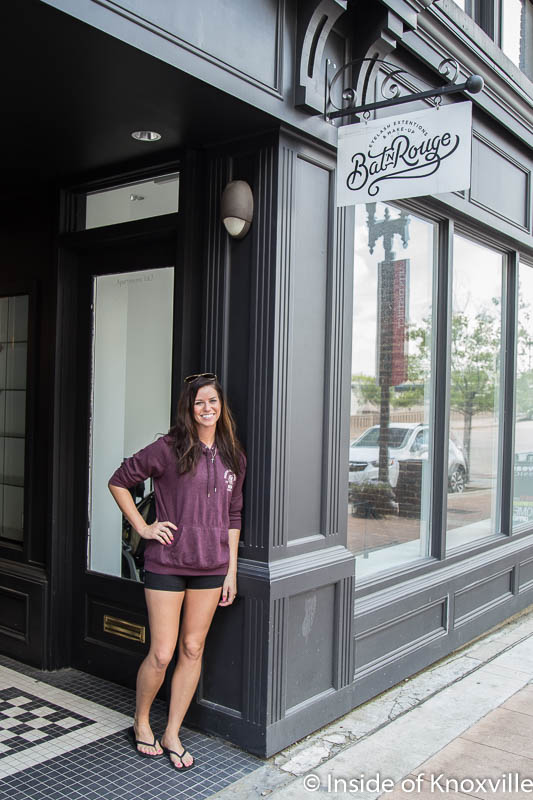 When I saw the sign go up recently on the 100 block of Gay Street in the Hubris Building being renovated by Jeffrey Nash and the Courtland Group, I assumed it was a new business to the city. It turns out it’s been around  for a while, but it hasn’t been so obvious to most of us walking around. I met with owner Hayley Hancock to find out exactly what she’s up to and to learn the  story behind the business.

Hayley is from the L.A. area, born and raised in Pasadena. She considered college after high school, but wasn’t sure what she wanted to study. Interested in fashion, and thinking she’d like to do makeup for special effects in movies and television, but make-up programs were expensive and it seemed like a big risk for a career she might not like and would have great difficulty breaking in to.

She settled on esthetician school instead, finishing in 2007. She also found a brief course in makeup that included three weeks of beauty makeup and three of special effects. During the latter three she worked on a studio lot on Dexter and Heroes and learned a surprising lesson: She didn’t like special effects makeup, at all. She strongly preferred the precision, blends and perfection of beauty makeup.

She got her foot in the door with a makeup artist and worked on low budget films, as well as fashion shows and with the Ed Hardy clothing line. She enjoyed the pace and the pressure, but other parts of the industry – the partying, drugs and sleeping your way to the top – didn’t sit well with her. She wanted to succeed because of hard work. She decided to step away.

She moved to Orange County, California working multiple jobs from restaurants and a mortgage company to being a nanny, while enjoying the beach. Her employer for her nanny job said that he eyelash person needed a nanny. The evening before Hayley was to take the job, the woman decided she didn’t need a nanny, but rather could use Haley’s help in the shop. Haley realized how successful the business was, so she gave it a try, learned to do lashes, loved it and stay for nearly three years.

When her brother-in-law was diagnosed with cancer, she moved back home to help with his children, while maintaining her nanny job three days a week in Orange County. She began doing lashes for friends and friends of friends in her parent’s home, then in clients home and finally in a hole-in-the-wall storefront she found. She became very busy and operated the business for a year-and-a-half.

But three years ago her life took a different turn. She’d always been interested in Nashville, loving country music, and when she got the opportunity to travel there with her family she jumped at the chance. She fell in love with the city and with nearby Franklin. She said it was friendlier and slower paced than L.A. She’d never considered moving out of California, but for the first time she felt, “a nudge.” If not when young and single, then when would she take such a chance?

She went on a mission trip to Africa in June and made a new friend, also from California who said she wanted to move with her. Assuming that sentiment would fade after the trip, she found she was wrong when the young woman continued to make plans for their move. Figuring a roommate with whom to split costs would be a good thing, Hayley set about closing out her lash clients and preparing for the move.

Her new friend said she’d heard that Knoxville was better and Haley had no interest in moving here. They agreed to take a trip to visit both Nashville and Knoxville and make a decision. Her friend had never been to Tennessee and Hayley had never been to Knoxville. They flew into Nashville and her friend did not like either it or Franklin, so they drove east, ultimately leasing a two-bedroom apartment in Oak Ridge. They visited Turkey Creek at the suggestion of their landlord.

Back in California, Hayley began packing. With her car ready for the cross-country trip, the night before she was to leave she received a text from her friend saying she’d changed her mind. While it seemed dire at the time – she had a two-bedroom apartment in a city she would not have chosen – she’s thankful now because otherwise she would not have found Knoxville.

After a few months of looking around and wondering what to do next, she decided to get busy doing what she knew, and in January of 2015 she took a small space she found on Craigslist in order to begin doing lashes. The space was below street level on the 100 block of Gay Street next to the New South Collective. She had enough room for one bed in a spot she describes as similar to a closet. Business was not good initially. She took a job cleaning tanning beds at Suntan City in Turkey Creek.

She was quickly moved to marketing for Suntan City and she and Ashley became close friends. She joined Ashley and her husband on a trip to work in an orphanage in Haiti. She’s now been three times and is very devoted to the orphanage which she says has moved the children from a meal every-other day to two meals a day. She soon left Suntan City when a Groupon she sold exploded and she was suddenly working ten hours a day in her closet beneath Gay Street.

She realized she needed help in order to grow, but she didn’t have the space. In early 2016 she moved to a basement space in the JFG building where she had about five times as much space with room for four beds and makeup tables. Uncertain how to find the kind of quality help she wanted, they found her. Larain called and Autumn texted when they heard through clients that she might be looking. A third, Emily, contacted her via her website and Kara found her through Instagram. She hired them all and uses two other employees for special events like doing makeup and hair for weddings.

As the business has continued to grow rapidly, the need for more and a better space became apparent. She worked out of the JFG basement just over a year, from March 2016 until now, saying it’s been a great year and the girls have formed a solid team. Customers come from Gatlinburg to Powell and west Knoxville, as well as downtown. Parking is tricky, she says, but they manage, mostly parking in the lot on Jackson.

After completing her one-year lease in Oak Ridge she moved into the Armature where she lived for a year-and-a-half before moving to Marble Alley. She says she loves the amenities at Marble Alley, including the private parking, pool, gym and nearby dog park. She also enjoys the fact that it is centrally located.

She’s also worked on getting her family here. A little over a year ago her older sister, brother-in-law and their three children moved about ten minutes out of downtown. She says her parents and younger sister “are slowly coming around to the idea as well and will be out here at the end of May to check out some of the areas in Knoxville!”

Services offered in the new space will include microblading (a relatively new process to replace lost eyebrows, coming soon) and dermaplaning (a method of exfoliating), eyelash extensions, spray tanning, and, of course, makeup and hair. As you can see in the photos, she’s working hard to get the new space open and she’s hoping to be in business in the new location on May 16 (next Tuesday). She’ll also have a few products, such as “lash sealer, lash grower, body scrub, tanning product,” available for purchase in the new shop.

Hours have been and will continue to be Monday through Saturday, 9:00 AM to 5:00 PM, though someone generally keeps the shop open to 7:00 PM or 8:00 PM on Tuesday, Wednesday and Thursday to accommodate those who can’t come in during business hours. You’ll find them on Facebook and Instagram and you can make an appointment by calling or texting 1-865-360-2504. You can also email at Batnrougebeauty@gmail.com.