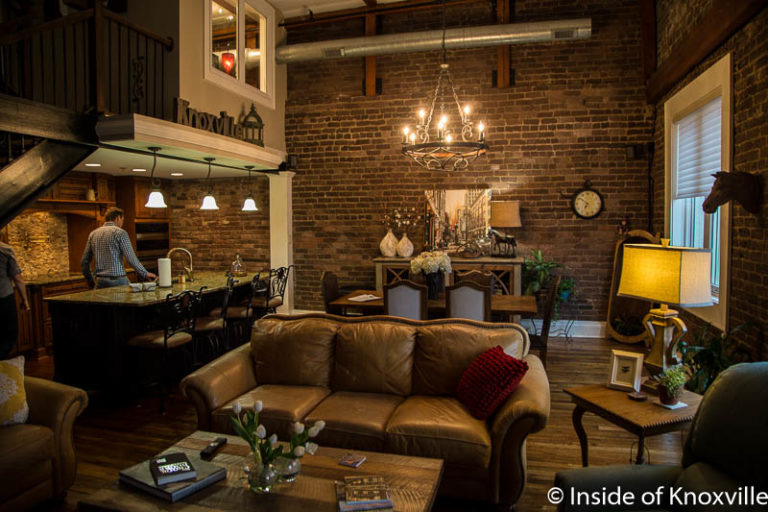 The City People 2017 Downtown Home Tour held this past weekend on Friday and Saturday featured some extremely attractive residences. Urban Woman and I have been attending the tour, which is over 25-years-old, for something around fifteen years. As I’ve said before, it was our gateway drug to downtown living as it became increasingly easy to imagine ourselves in some of the homes we toured.

Two of the homes on the tour have previously been spotlighted on this blog, so I’ll direct you to those articles and not include those homes in this review. The first is a unit in The Tennessean. I featured the same unit in December and the photographs I included there were much better than anything I can get on a tour with others tourists running about, so if you’d like to see this beautiful high-end unit, check it out here.

As an introduction to the tour, I featured another unit a couple of weeks ago. Kendrick Place, built just over 100 years ago as single-family homes and returned to that status by Kristopher Kendrick, is often a source of curiosity, and unit 602 was included on this tour. For photos of that home, click here.

That said, I’ll look at a few of the homes on the tour which Urban Woman and I toured this past weekend and have not recently been featured here. We’ll look at several today and more as the week progresses. I’m going to take my time on this since downtown living and downtown residences are really at the heart of this blog’s origins. Since the real interest is in the photographs, this article will include more photographs than usual. The information you see here was provided by the excellent tour booklet provided by City People.

The Pembroke building dates to 1929, built by Benjamin Sprankle and originally called the New Sprankle Building. The original Sprankle Building once sat atop the hole at the corner of Union and Walnut in what is now a parking lot for Home Federal which demolished the building saying it needed the space for a new building which was never built. Benjamin Sprankle also built the Daylight Building and Kendrick Place (then called Masonic Court).

In 1933 the building became the primary headquarters for TVA and, as such, was visited by world luminaries such as Jean-Paul Sartre and Jawaharlal Nehru. In the early 1980s TVA left the building when it built the TVA towers at the northern end of Market Square. Developer Ron Watkins transformed the building to commercial and residential spaces, making it one of the first buildings downtown to undergo such a transformation.

The beautiful unit you see featured here is all clean lines and beautiful appointments. It includes two bedrooms and features a view of the rooftop pool, the only private pool to be found in downtown Knoxville until the recent addition of the pool at Marble Alley.

The next home we visited is in The Elliot. In a measure of the distance downtown has traveled, the first time I ever visited the Elliot, which was  then across from the News Sentinel Building, was the late 1980s or early 1990s. I was delivering food for Fish, a local food pantry. Inside was all manner of squalor, with homeless/near-homeless people sleeping on the floors in terrible conditions. Even then it was clear the building could be very special. Twenty-five or thirty years later, single unit in the building likely costs more than the building was worth at that point.

Built around 1937 as an apartment building, it is one of the few residential buildings downtown which was originally intended to be a residence. Like many large, older buildings, it began as an elegant address and declined over the years, particularly during the Great Depression during which it housed as many as 190 indigent people. It has never ceased being a residence, with the exception of a few years when it was empty and, amazingly, much of the original wood, period tile and leaded glass has survived.

And the units I’ve seen are amazingly built and decorated and this was no exception. Sponsored by Michelle Vittetoe, the interior designer, the entry to this unit is directly off the street, then up an attractive stairwell. The incredible home speaks for itself. It is prettier than the photographs. We also loved the balcony which now sits behind the trees that have grown so quickly in front of the building, leaving its face largely obscured.

The Cable Piano Building wasn’t a building name I recalled. It’s the narrow building that includes the Art Market and also, as it turns out, an amazing home. The building dates to 1898, having been built to replace a building destroyed in the “Million Dollar Fire” of 1897. The Cable Piano Company used the building for decades selling pianos, organs and other instruments while offering music lessons.

The residence (one of two) now located in the building took several years of permitting and construction to become a reality. An example of the logistical issues presented: the couple had a custom staircase built and installed through the roof, which required closing a section of Gay Street on a weekend.

The foyer that serves as an entrance to two homes is decorated with a splendid display of Brian Pittman’s cathedral art. A long hallway, featuring beautiful floors and connecting two bedrooms and a laundry room leads into the residence. The main living/dining room is an open space featuring two-story ceilings, massive views of Gay Street and that large custom-made stairwell.

The stairs lead up past an additional bedroom to the rooftop. Once there, an amazingly large deck equipped with a bar, tables and chairs overlooks Gay Street. It’s truly a special place tucked just out of sight over downtown’s most traveled corridor. It’s the kind of home that destroys all the ideas of what kinds of homes are placed into industrial spaces.

Given the number of photographs, I’m going to cut it off there and show more of the homes in coming days. Stay tuned for more beautiful downtown residences.