Biscuits and Books: A Festival Mashup 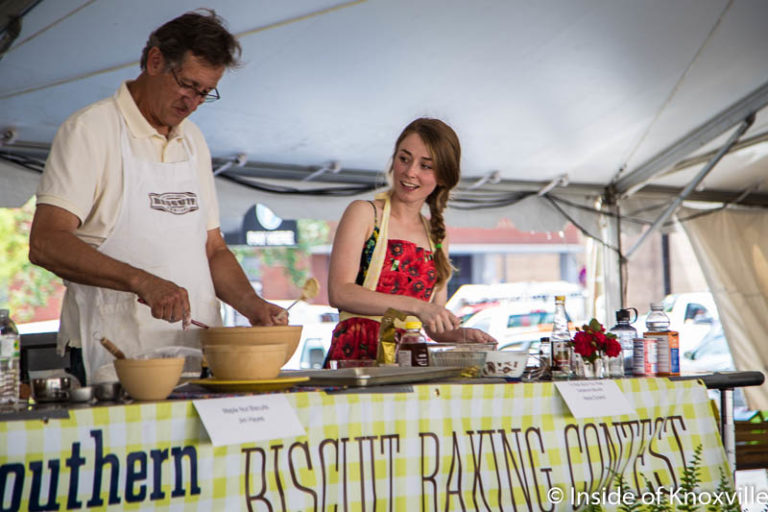 As has been the custom with the Urban family the last few years, when this particular Saturday comes along I bounce back and forth between the International Biscuit Festival and the Children’s Festival of Reading, while the young Urbans spend most of their day with the authors, musicians and all-around fun on the World’s Fair Park with the Festival of Reading.

As in the past, I started with biscuits and, I have to say, this must be the best smelling event in the city. It’s also filled with happy people who don’t seem to mind standing in line to get those small fists-full of goodness. And, as it turns out, the lines weren’t nearly so long this year. To be sure, I saw two or three lines with a hundred or so people patiently waiting, but other tables could be approached relatively directly.

Some of the absence of lines seemed to be due to increased efficiency at many of the booths. Lots of biscuits were ready at the beginning and many of the booths seemed to have extra people to make sure it all flowed smoothly. The other variable seemed, at least to me, to be that the crowds were thinner. It would be a theme for the weekend and other events. I found it to be much more pleasant and over-all more manageable.

There were also some deviations from the biscuit theme this year (though I may have missed them last year in the midst of the crowds).  Tsamma offered cold-pressed watermelon juice, for example. The watermelon theme continued with the presence of the honest-to-goodness National Watermelon Queen offering up slices of the juicy gourd. Lipton had a truck presence offering mango juice and had little tiki shelters and dangling chairs (in the shape of mangos?).

Buskers came out in more numbers than I remember. Dr. Bob, the saw guy, along with several others kept things lively and festive. I never feel I have the time to give the main stage performers the time they deserve. I heard a bit of Zack Miles and, particularly, loved his guitar work. Much later I enjoyed some of the set by local favorites and long-time biscuit songwriting champions, the Knox County Jug Stompers. I hated that I missed Will Carter and Daje Morris – both favorites of mine – but I was with the little Urbans at that other festival.

We felt we arrived at the Children’s Festival of Reading early (just a bit after they opened), but it was already hot and the heat intensified. Again, it felt like the crowd was smaller than we remembered from before and maybe a variable was the heat.

I always feel we don’t give our family children quite the full experience of the festival. They both prefer being active over sitting for music or stories, so they don’t get the exposure I wish they got. Maybe we’ll plan next year a bit better now that Urban Girl is reading more and have her read some of the books by a featured author. The festival brings in some of the best. Sarah Weeks visited this year and her So B. It is a great example of how good children’s and young adult novels can be.

But the kids headed for crafts. While I stuck my head in on Farmer Jason with Sean McCollough the WDVX Kidstuff they headed for building blocks, legos and more. They touched a large snake, petted a puppy and clamored for the playground which Urban Girl has loved since she was tiny. It was Urban Boy’s first taste. I caught a little of the Knoxville Youth Jazz Orchestra, but they headed for the train.

After the train ride, honestly, we’d done all any of us could handle in the heat. Nap time approached for the youngest and they (and we) were played out. We stopped in to watch a few minutes of science fun before heading back home with a vague nod to coming back later (it didn’t happen). All-in-all, they had fun, but I left with that feeling of wanting them to connect more to the authors and illustrators.

I took a final swing through the Biscuit Festival and noted new entrants to this year’s competition: both the Phoenix Pharmacy and the Drawing Room won runners-up in the People’s Choice Award which went to Alex Belew Catering. The Drawing Room also won Best Booth. Frussie’s won the Critic’s Choice Award.

I watched a little of the bake-off lead by local celebrities Brent Thompson and Erin Donovan, along with an actually very impressive panel. Kimberly Asbury was crowned Grand Champion of the Biscuit Baking Contest with her Alabama Scotch Egg biscuits.

The winning strategy this year might have been to come late: biscuits remained and lines had disappeared by around noon. Even with the heat, participants seemed to have a great time and the event flowed more smoothly than, perhaps, it ever has. If you stayed away this year, you may want to reconsider for next year. There are more photos and I’ll try to put them out for everybody later today on Inside of Knoxville’s Facebook Page.