Merchants of Beer Opens At Last! 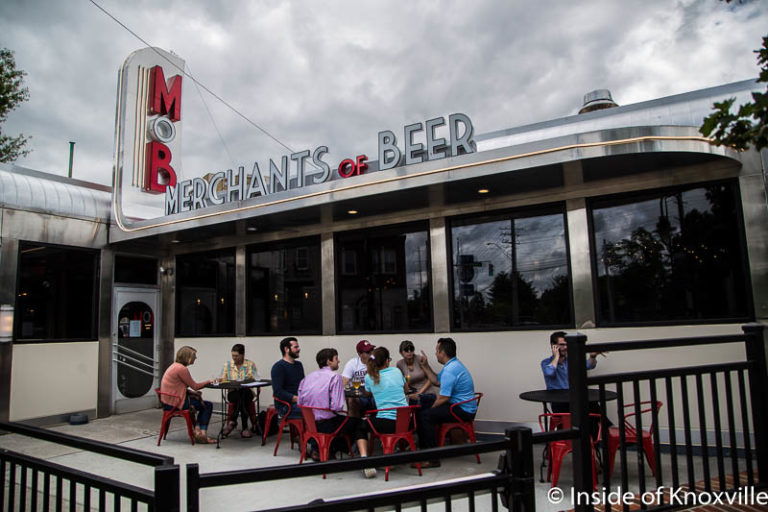 It’s been just under a year since I first wrote about the coming business. Originally slated to open last fall, that season gave way to winter and then most of spring passed. I’ve been asked about the business dozens of times in the interim. Some readers became skeptical that it would happen, but we’ve seen this movie before in other downtown businesses: it (almost) always takes longer to open a business than a reasonable person might guess – or hope.

A soft opening for training was held this past Thursday and abbreviated hours Friday through Sunday gave the staff a chance to figure out procedures, point-of-sale systems and generally get the kinks out. General Manager David Suits said it went well, with fewer problems than anticipated. Starting today they will operate regular hours.

David has been in the food service industry for eighteen years, working his way from server to a corporate position with Macaroni Grill, with whom he worked for a dozen years. Wanting to shift from the corporate end, he became assistant GM at Abuelo’s in Turkey Creek before spend a year at Balter. He’s long been passionate about beer, being a home-brewer for years and enjoying nothing more than breaking out a new beer with friends.

The building has been converted to a beautiful space inside and out. In the previous article above, you can see where the building started after being vacated by Enterprise Rental. Both the inside and the outside have been transformed. The project was designed by Studio Four Design, giving the outside a more modern, fresh appearance and the inside is simply more beautiful than I could have imagined given my last visit to Enterprise in that space.

As you might expect, once inside you’ll find beer. A lot of beer. Originally intending (as stated in the previous article) to have 23 taps, it has far more. David said there will be 38 to 40 beers on tap at any given time. You can expect a blend of local beers and excellent craft beers from a range of places, with an emphasis on beer you might not find locally in other spots. You’ll always find four sours. The plan is to provide a range of beers, so you can find your favorite year-round.

But there is more. While you might expect beer, you’ll also find two red wines, two white wines, a sparkling wine and several craft sodas on tap. They’ve also partnered with Honey Bee Coffee for a soda and an iced coffee drink and if beer-to-go is your goal, a large package room has an ample supply of carry-out options.

David hinted that deliveries to downtown addresses might be a possibility in the future. Finally, they are currently featuring a cocktail in conjunction with Crafty Bastard, based on their Tessellation IPA. They plan to add more cocktails to the menu as they go. Other experimentation with local breweries is planned.

Additionally, light food, which is not to say simple, boring or even typical. The menu isn’t completely set, but you’ll find things like pan roasted chick peas, savory hand pies, a sweet potato dish with curry, pimento cheese with Benton’s bacon. On the exotic side, you’ll find beef harissa, which is beef with a hot paste used in North African cuisine (includes peppers, paprika and olive oil) and elk, bison, wild boar and beef jerky. Chapulines will also soon appear on the menu (chopped, seasoned grasshoppers).  Simple, but pushing the edges.

The menu will offer pairings for the food both with beer, as you might expect, but also with cigars. A humidor fills one end of the former diner and there you’ll find a large selection of cigars and cigar accessories. If you think you recognize that display case and the name John Stancil, there’s a good chance you may remember my article from his opening in the tasting room at Saw Works. He’s moved the operation to this comfortable space offering the same fine cigars.

A small patio on the front is smoke-free and a larger one in the back is smoking optional. Parking is available on the premise. Beginning today, hours are Monday through Thursday, 11:00 AM – 11:00 PM, Friday and Saturday from 11:00 AM to Midnight (though David says they will stay open later if they have customers), and 11:00 AM to 10:00 PM on Sunday. Food, beer and cigars will be available at all hours.