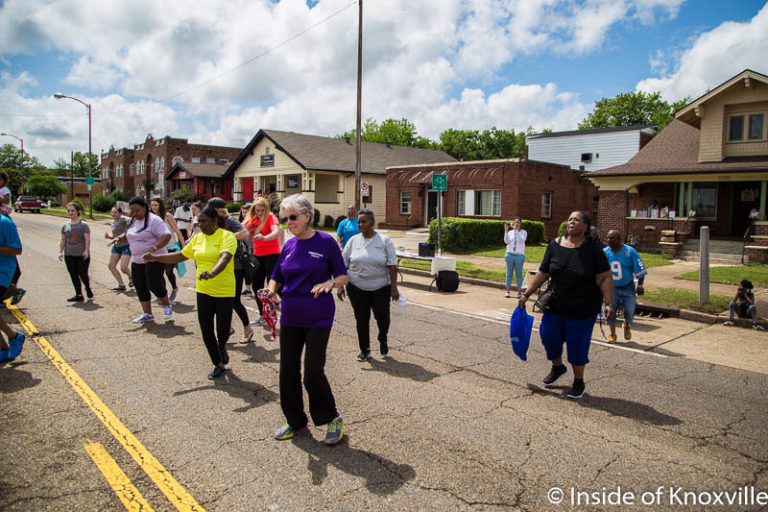 It was a slow start for Open Streets Knoxville this past Sunday. Rain had fallen all morning and after walking from home to the route on Magnolia, there was a notable absence of people. To be fair, I was a few minutes early, and I was soon joined by my friend Kristen, but as we walked down the middle of the road, it felt a bit eerie. Sort of post-apocalyptic.

Slowly that changed as vendors and others set up along the road and people began tentatively entering the streets. I was reminded of the first Open Streets Knoxville in which people could be seen glancing about as they left the sidewalks as if to ask, “Is this really ok?

We met the Appalachian Puppet Pageant, the fun parade organized by Cattywampus Puppet Council. Local students made most of the puppets in the parade and many of them joined the parade. A number of people simply walked along or biked along. It felt one part community parade, one part Pride Parade and one part just a crazy, creative and delightful burst of fun.

From stilt walkers to full-body and partial puppets and puppet heads, to people simply strolling or biking along, it was great fun and made the Open Streets event start to feel festive. Kristen got a bear hug from not-your-average bear. Creatures both recognizable and not passed by. One of them look a lot like Kelley Segars and another looked a lot like a great Tracy Jackson puppet. We loved the drums and trombone. The snake and many other puppets were exceptionally creative. The Sandsation Dance crew added flair, as always.

I think the experience was altered a bit, for me, from previous Open Streets due to the fact that I didn’t have children in tow. That said, Kristen and Paige Travis doing double dutch was a pretty good substitute. We talked to John and Karen and admired their fancy new e-bikes which, Karen would like me to point out, do require pedaling!

Dreambikes drew a lot of attention to their booth and the connect four game got a lot of attention. I think maybe more people cycled for this one and it was perfect for that – largely flat and a very wide street. A massive chess set drew some brave challengers and line dancing was a popular stop – particularly, it seems, for the women.

Uni-cyclists, skateboarders and Hard Knox Roller Girls also added to the flow, though it seemed the crowds, like those at the other events of the weekend didn’t match the previous iterations of the event. The rain, no doubt contributed, though the clouds parted as the event progressed. The wideness of the road also likely made the crowds seems smaller than they were. But it was fun and my last image was of Last Days of Autumn in full party mode.

Did people stay away because of long-held beliefs about Magnolia? Did the community support the event? I’m not sure. I do know that, as open street events are supposed to do, this one helped me focus on the street in a way I’d never done as I drove along in my car. My trips to Magnolia usually involve a quick stop at R.T. Clapp which I’ve used (along with the Oak Ridge location) since sometime in the early 1980s for my car repair and maintenance.

While there are clearly blighted sections, empty lots, abandoned buildings and sidewalks and roads needing love, there’s also a lot there to work with. The street has a long and notable history about which Jack Neely recently wrote extensively. There are attractive homes, or buildings originally built as homes, some of which you see pictured here. The four-plex building pictured has to be one of the few in existence in the city. It’s worth a walk, if you have the chance to take it and it’s a short walk from the heart of downtown and just around the corner from the Old City.

So, what’s next for Magnolia and for Open Streets? The controversial Magnolia Corridor Plan presented a year-and-a-half ago has not been implemented, though money has been proposed in the mayor’s most recent budget to start work. Changes will likely come slow and not without difficult conversation. Any improvements will come at a price to what has been and we’ll probably have conversations on this space and elsewhere about the issues of gentrification.

Open Streets? It’s headed for south Knoxville this fall. Precise routes have not been officially announced, but it looks like it will be another great event. Great thanks to Bike Walk Knoxville, for keeping these events going. They change the way we see our streets, our communities and ourselves.

First, I’ll have many more photographs of the Open Streets event on the Inside of Knoxville Facebook Page sometime later today or tomorrow.

Second, with this article, I will begin my customary summer slowdown in order to have an opportunity to spend more time with family and generally appreciate a more languorous pace during the hotter months. I’ll likely travel a bit and when I do, I’ll share it with you here, so we can all vicariously slip out of the city together. I’ll post again on Friday and then I’ll hit two to three times a week for a while, rather than every day. Of course, the 10 Day Planner will roll on each Sunday.

Finally, and speaking of Sundays, I’m going to take a couple of weeks off from Knoxcentric: Powered by Inside of Knoxville on WUTK, 90.3, Sundays at 10:00 AM. Co-host JJ Pershing will keep things rocking along, so definitely tune in. I’ll “see” you back on the radio in three weeks.