A Glimpse at the City’s (Near) Future: Inside the Mayor’s Budget 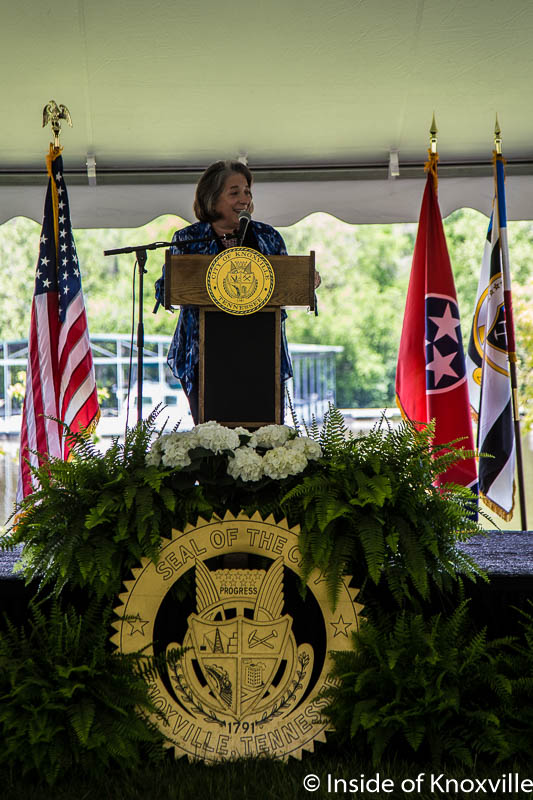 Back-to-back days last week I attended the official groundbreaking, though much ground had already been unofficially broken, for the Marriott Hotels coming to Church and State and the mayor’s “State of the City,” address. It was fitting that the two were held on consecutive days. The ground-breaking and the Tombras project sitting just behind it serve as symbols of the progress the city has made and, in fact, she referenced them both in her address the next day.

In fact, she started the address with a list of development projects, either recent or currently happening downtown and, as readers of this blog would guess, it’s pretty impressive. In addition to the Marriott project, she mentioned Marble Alley, Phase 1, Mill and Mine, Regas Square, Farragut Hotel, KUB/Tombras Building, Regal Headquarters, Pryor Brown, State Supreme Court site and the Baptist Hospital site apartments.

It’s worth mentioning the number of people gathered in Suttree Landing Park to hear the address. Easily in the hundreds, the tent, which was the largest I’ve ever seen outside a circus, couldn’t hold everyone who attended. Many people stood or sat in the sun to hear her assessment of our current state, along with her budget proposals. Knoxville’s Poet Laureate, R. B. Morris read a moving poem prepared for the occasion. You can read it here or listen to R.B. read it here.

Her budget, obviously, doesn’t simply address downtown, but I’ll focus on the parts which directly or indirectly impact the center city. The first and most prominent commitment to downtown in the budget had to go to a parking garage, didn’t it? Yes, it did, and it’s a good change coming so soon after the last expansion of the State Street Garage. In 2013 an additional level was added to the garage in addition to the pedestrian walk-way from the garage to Gay Street and the mayor’s new budget allocates $7.5 million for two additional levels.

When the garage was last expanded, plans were made for an eventual expansion and, just four years later, the mayor feels we need additional downtown spaces. The money will also pay for modernizing, by providing sensors for each space, making specific information available regarding empty spaces. Sensors will also be installed in the Market Square Garage. Will we get a parking app like other cities? Maybe it will also include a tracking app for trolleys, something long overdue. Also intriguing, she mentioned the possibility of making space available above the parking for residential or commercial use.

Near downtown, she stated that the Cumberland Avenue project would be complete by football season. An additional $5 million has been allotted to the Magnolia corridor project, extending it to Bertrand. Money is included for streetscape projects in downtown north and on Sevier Avenue. The city-wide sidewalk budget has been quadrupled to $3 million – a significant step in making more places walkable.

She also discussed the city’s commitment to reducing greenhouse emissions. Based on 2005 levels, the city had previously committed to reducing emissions 20% by 2020. Having already attained a %15 reduction, the next target for a reduction is the city’s 30,000 street lights. Street lights represent 40% of the city government’s energy use. $17.5 million in the new budget will be allocated to convert street lights to LED. Going forward, the city will save $2 million dollars annually thanks to the switch. Knoxville will be the first city in Tennessee to switch to LED lights and the move will allow the city to exceed its goal of 20% greenhouse reductions.

Several parks will receive significant improvements. The south lawn of the World’s Fair Park which has suffered as a potential outdoor venue because of its lack of a permanent stage and because of severe drainage issues will have both issues addressed ($3 million). The convention space beneath the Holiday Inn, which is city-owned, will also get an upgrade, with a new roof and HVAC system ($2.1 million) and will be booked, going forward by Visit Knoxville. $1.5 million will be allocated to complete Suttree Landing Park, including boat launches.

The Urban Wilderness will be the recipient of $1.7 million which will be allocated to several projects, including completing the Rail Trail from the Kern’s Bakery Building to Mead’s Quarry. It will also provide a parking area and entry point to the Urban Wilderness at the end of the James White Parkway. Mayor Rogero made a special point of thanking Governor Haslam for facilitating the transfer of state land to make this happen.

Lower income citizens were designated for new support in the form of $2 million for affordable housing. Also, $250 K was tagged for the Change Center, with $600 K additional for new KAT routes to the Change Center. Also addressing lower income citizens, $1 million in funding was allocated to infrastructure in Londsdale to support the Emerald Youth Foundation‘s proposed sports complex. Interestingly, this was mentioned in the prayer that started the event, with a plea that God support the city’s partnership with the organization whose mission is to, “raise up a large number of urban youth to love Jesus Christ and become effective leaders who help renew their communities.”

• $1 million for new greenway corridors.
• $500,000 for new bicycle infrastructure.
• $300,000 for public art, and $400,000 in grants to local arts and culture organizations.
• $800,000 in grants to community and social service agencies that provide critical services to Knoxville residents.
• And $500,000 to help restore and preserve historic commercial and residential properties.

The budget, as proposed calls for no increase in taxes, but relies on growth for the increased expenditures. Mayor Rogero noted that some of the original TIFs and PILOTs  that have fueled downtown redevelopment begin to expire in 2019, fifteen years after they were granted and, as that happens, those properties come onto the tax rolls. First reading at City Council is May 9, with the second, and final, reading May 23rd. A public hearing will be held May 12. You can read the full 228 page budget here.