The Dogwood Arts Festival Fills Downtown with Beauty and Fun 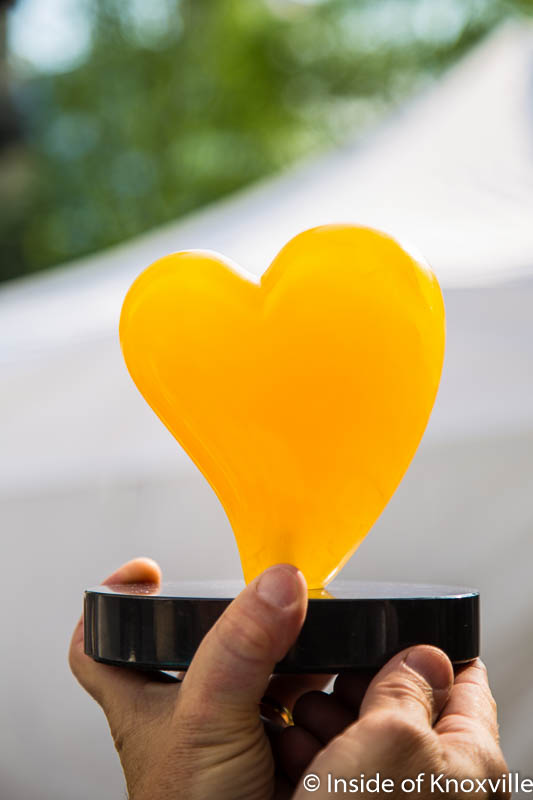 It’s sort of like the grand finale of a fireworks show. We’ll have more festivals as the summer and fall move along, but the most intense portion of festival season has come and gone and it ends in spectacular fashion with the Dogwood Arts Festival on Market Square. It really starts months ahead of time with the selection of the carefully curated artists and artisans and planning for the event. By Wednesday the week of the festival, there are obvious signs that something’s about to happen. Thursday is a big load in and then the three day festival is underway.

Urban Woman and I decided to take our first look on Friday, which is when I took a number of the vendor pictures you see here. Early Friday is a highly recommended time for looking at the wares, as the crowds are small, the vendors fresh on the scene and the product hasn’t been thinned out by others. It proved a very pleasant way to start the festival.

We did notice a particular absence that disappointed us: the culinary tent wasn’t to be found this year. It’s been our favorite part of the festival for the last several years and we’ve generally discovered foods, recipes, chefs and wines we continued to enjoy after the festival. It also served as the reason for us to return repeatedly to the festival through the weekend. I understand it is a very large expense and its omission is understandable from that perspective, but I know I’d buy a ticket to come back through the weekend and enjoy the event. If there was enough support for that, perhaps we’d get it back.

This year’s festival did offer the Blooming Beer Garden, providing festival goers a shady spot to take a break and sip an adult beverage, so that was nice. Allowing wine throughout the festival footprint was a good move. That paired with the excellent selection of food trucks provided a great combination of culinary possibilities and ample seating was provided along Market Street, which was appreciated. We enjoyed fare from several of the food trucks through the weekend.

The music was another highlight of the weekend. We listened to a bit of Daje Morris on Friday afternoon and caught a number of acts over the next two days. Humming House put on a really good show on Saturday night. I did see a complaint on Facebook regarding the loud music on Krutch Park in the early afternoon on Sunday. I liked the grungy guitars I heard, but I understand how residents in the Holston, for example might prefer something a bit more quiet or mellow on a Sunday afternoon.

As always, the quality of vendors remained very high. I really enjoyed studying Supphatra’s Clay Flowers. I always enjoy seeing the work from Buckhorn Ridge Studio and I reacquainted with Bill Cook, Jr., whose marble sculptures call my name. Maybe one day. It was cool to see Pretentious Glass with a booth and I enjoyed both them and Marble City Glass. Greg’s Garage Metalwork was also fun, along with Living Pictures – framed plants. Urban Woman shared our wealth of empty frames with the person doing that. Win – win.

Saturday, for us, was all about the kids and both Urban Girl and Urban Boy had a blast. More of the activities were suited for her (at age seven) than for him (at age 2), but he watched “sis” and tried his best to do everything she did. He loved the bear with the One World Circus and they both drew with the sidewalk chalk, walked the tightrope and attempted to juggle. She loved the print-making, coloring, string-tangling and the big bubbles provided by Muse Knoxville.

I finally had to haul them out of the sun, slowly convincing them that the shade of red they had turned probably would not be mom-approved. We retreated to the French Market where they decided the French soda (cherry) was worth taking a break for. I went back later that evening for Humming House and we called it a festival at that point, preserving Sunday for necessary recovery and domestic chores.

We still have Pridefest, the International Biscuit Festival, the Children’s Festival of Reading and others sprinkled about, but with the advent of Tuesday night concerts on the square (tonight!), Variety Thursday’s on the Square, and, especially, the return of the Market Square Farmers’ Market this week on both Wednesday and Saturday, it begins to feel like we’ve moved into our summer rhythm.

I really enjoyed all the festivals that have come and gone this season. They each bring their own spice to spring in the city. The pace now slows a bit and we recover. I like the rhythm of the various seasons in downtown Knoxville. Welcome to the season of jazz on the square and the fresh vegetables in the neighborhood.